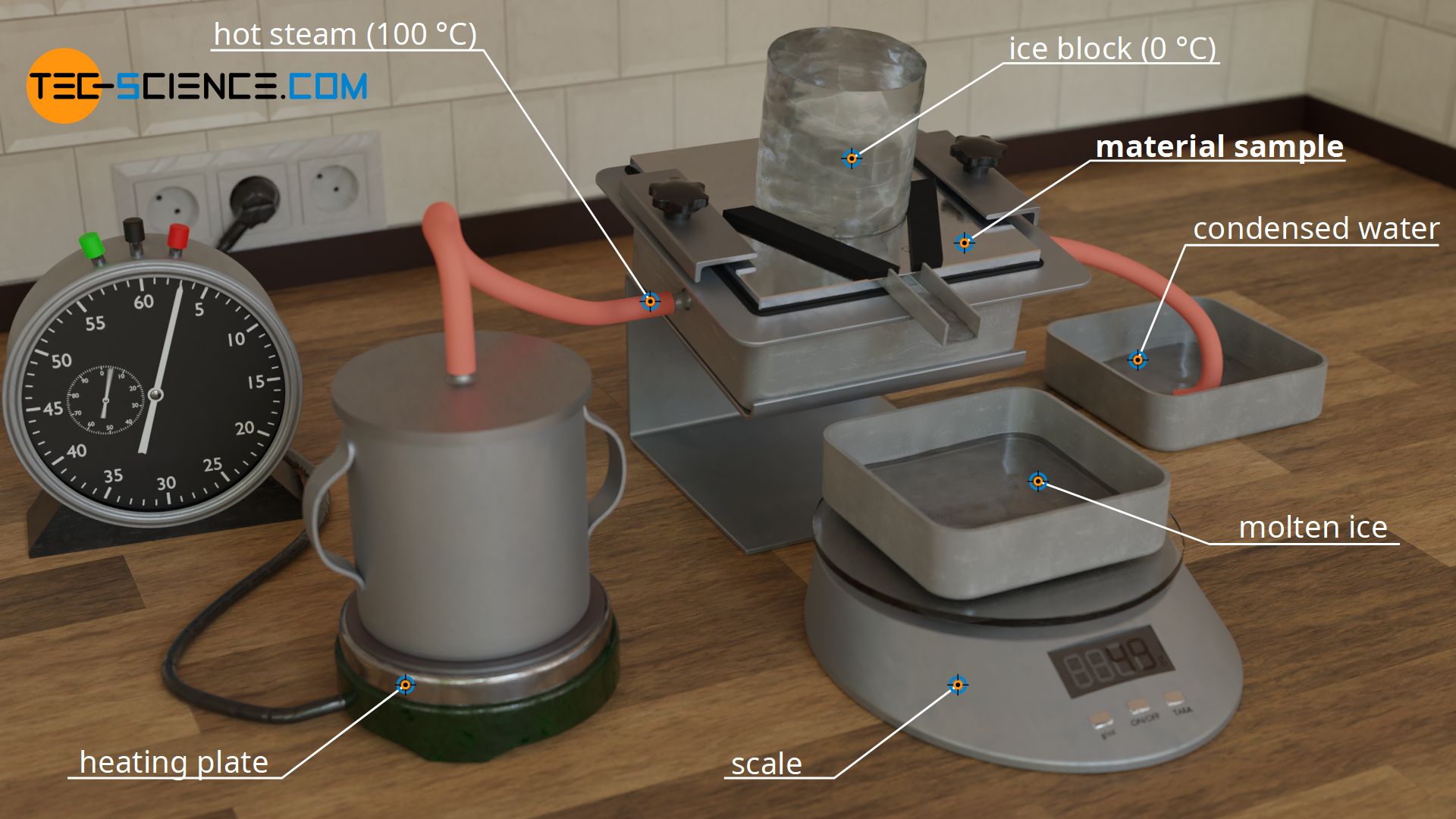 In this article you can learn more about the experimental determination of the thermal conductivity of materials using steam and ice.

Thermal conductivity is a measure of how well or poorly a material conducts heat. The thermal conductivity λ describes the relationship between a temperature gradient ΔT along a distance Δx and the resulting rate of heat flow Q* through the area A:

Detailed information about this equation, also known as Fourier’s law, can be found in the article on Thermal conductivity. In this article we will only focus on the experimental determination of thermal conductivity, which is based on the equation above:

In order to determine the thermal conductivity λ of a material with a thickness Δx and an area A, a temperature difference ΔT must first be applied and the resulting heat flow rate Q* must be determined.

In the following a relatively simple experiment will be presented with which the thermal conductivity of a material sample can be determined.

For this purpose, a slab-shaped sample is used, for whose material the thermal conductivity is to be determined. In the case shown, it is a metal plate. This metal plate has the thickness Δx = 10 mm and is heated from one side and cooled from the other. The figures below show the experimental setup.

However, the timing and collection of the melted water must not be started immediately after the ice block has been put on the specimen. First of all, a steady state must be established, i.e. you have to wait some time until the temperatures in the material do not change any more and a temperature gradient that is constant over time has been established. The thermal conductivity only refers to such steady states where the rate of heat flow is constant in time. The change of temperature while the sample is still warming up, however, is described by the so-called thermal diffusivity (although both quantities are linked together). This temperature propagation is a so-called unsteady state in which the rate of heat flow is not constant in time. In the simulation below the steady state is reached after about 10 seconds.

As a further quantity for calculating the thermal conductivity, the area A through which the heat flow passes is also required. This corresponds to the contact surface of the ice block. Note: Not the entire surface of the plate may be used as a basis, since the heat flow relevant for melting the ice block only passes through the area where the ice block is located. The heat flows outside of this area, which are considered one-dimensional, are transferred to the air and are not taken into account by the melting process (more about this later).

Cons of this experimental setup

A further disadvantage of the experiment described is that during the performance of the experiment there is no one-dimensional heat flow through the material, as Fourier’s law requires on a macroscopic scale. Heat, so to speak, does not flow straight through the sample, but also enters the heat conduction zone (measuring zone) laterally. The heat flow is therefore based on a larger surface area on the hot underside of the sample than on the upper side where the ice block is located (see figure below). This effect of the two-dimensional heat flow has less influence on the result, the thinner the sample material is in comparison to the surface. At the same time, however, the influence of thermal radiation increases, since this penetrates thin samples more strongly than thick ones.

The figure below shows the simplified simulation of the temperature distribution and thus the heat flow. Modelling was done with a constant temperature at the bottom of the plate and constant temperatures at the top. The temperatures towards the ice block and towards the environment were assumed to be sharply limited. The simulation shows the formation of a two-dimensional heat flow as it occurs in reality. In comparison, the figure also shows a one-dimensional heat flow as it is actually required for the Fourier’s law to be valid.

For the determination of the thermal conductivity according to equation (\ref{a}) to be valid at all, a one-dimensional heat flow must be ensured. This can be achieved, for example, by controlling the temperature outside the actual heat conduction zone (measuring zone). The temperature is chosen identically to the temperature of the cooled side. Therefore the sample plate around the ice block is also brought to a temperature of 0 °C.

Such a temperature-controlled ring, which guides the heat flow in a one-dimensional direction, is also known as a guard ring (guard for short). This principle of a guided heat flow is used, for example, in the so-called Guarded-Hot-Plate Method (GHP), which is described in more detail in the linked article.