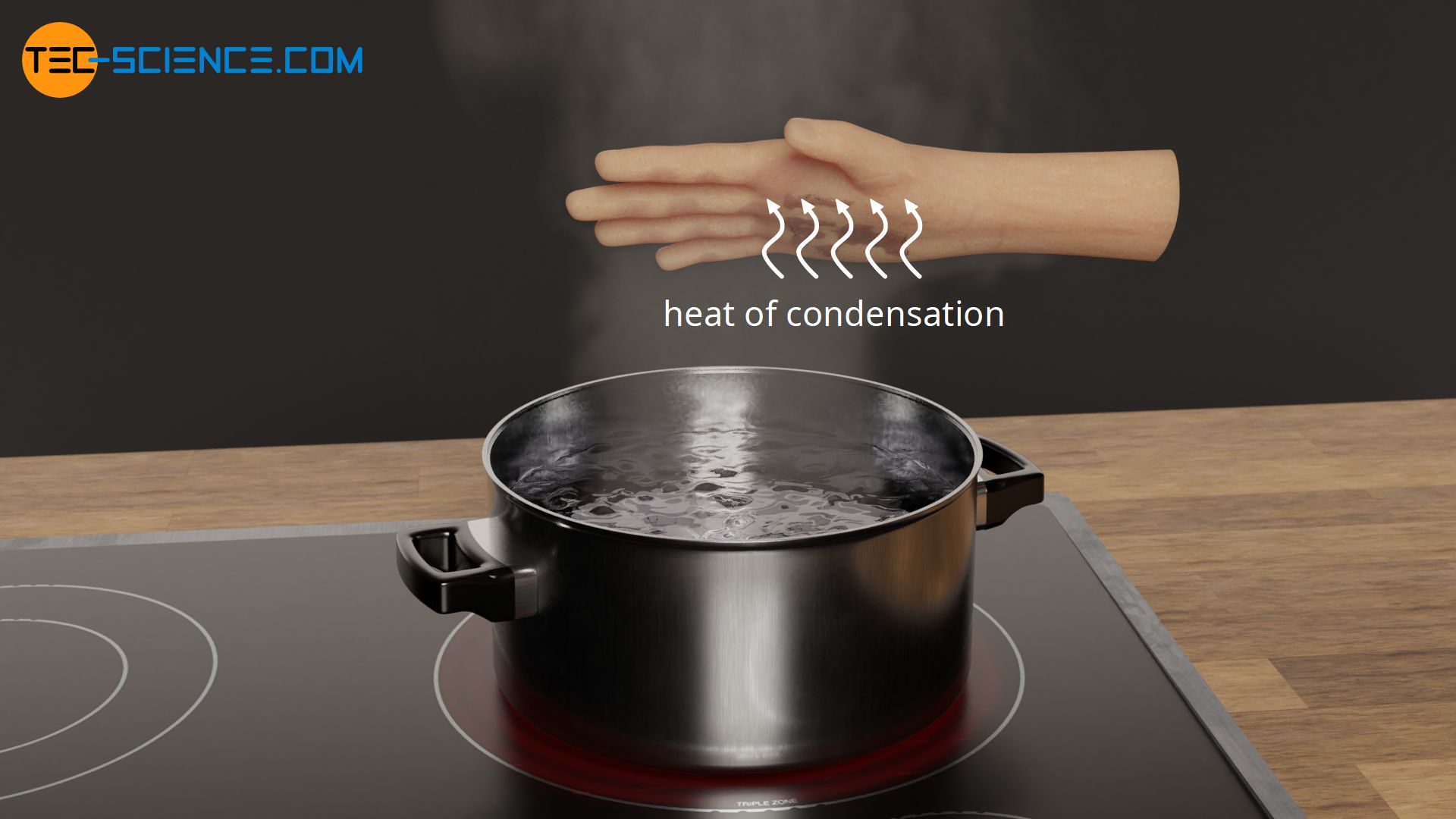 Steam burns are more dangerous than water burns because more heat is transferred due to the additional release of latent heat of condensation.

To vaporize a liquid, energy as heat must be transferred to the substance in order to break the intermolecular bonds so that the substance becomes gaseous. In the case of pure substances, the temperature remains constant until the liquid has completely vaporized. The heat added during vaporization therefore does not result in an increase in temperature, since it is used to break the intermolecular bonds (hydrogen bond). The heat to be added for the complete vaporization of a certain amount of liquid is also referred to as heat of vaporization or, more generally, as latent heat.

Water requires a very large amount of heat to vaporize. For example, to vaporize 1 kg of water, a heat energy of 2257 kJ is required. If we compare this amount of heat with the heating of water from 20 °C to 100 °C, only 336 kJ is required. Thus, more than 6 times as much heat is needed for vaporization as was necessary for heating! The transferred heat of vaporization cannot simply have disappeared due to the conservation of energy. Rather, this enormous amount of energy is stored as internal energy in the gas phase.

Water needs a multiple of the amount of heat for vaporization compared to heating up to boiling temperature!

This understanding now also explains why steam burns are generally much more painful and dangerous than water burns. If the relatively cool skin comes into contact with water vapor (steam), the water condenses there and heat of condensation is released and transferred to the skin. As already explained, due to the large amount of latent heat involved, there is a huge amount of thermal energy transferred. Thus, in contact with steam, significantly more heat is transferred to our skin than in contact with liquid water, although the temperature is the same in both cases (100 °C).

Steam burns are more dangerous compared to water burns because additional latent heat is transferred in the form of heat of condensation!

Note that the human perception of warm or cold is not based on temperatures, but on heat flows (transferred heat per unit time). Thus, although the temperatures are identical at 100 °C in both cases, condensation results in a much larger heat flow. This greater heat flow not only causes a psychologically warmer perception, but also leads physically to more dangerous burns. More information on the perception of warm and cold can be found in the article Why does metal feel colder than wood.