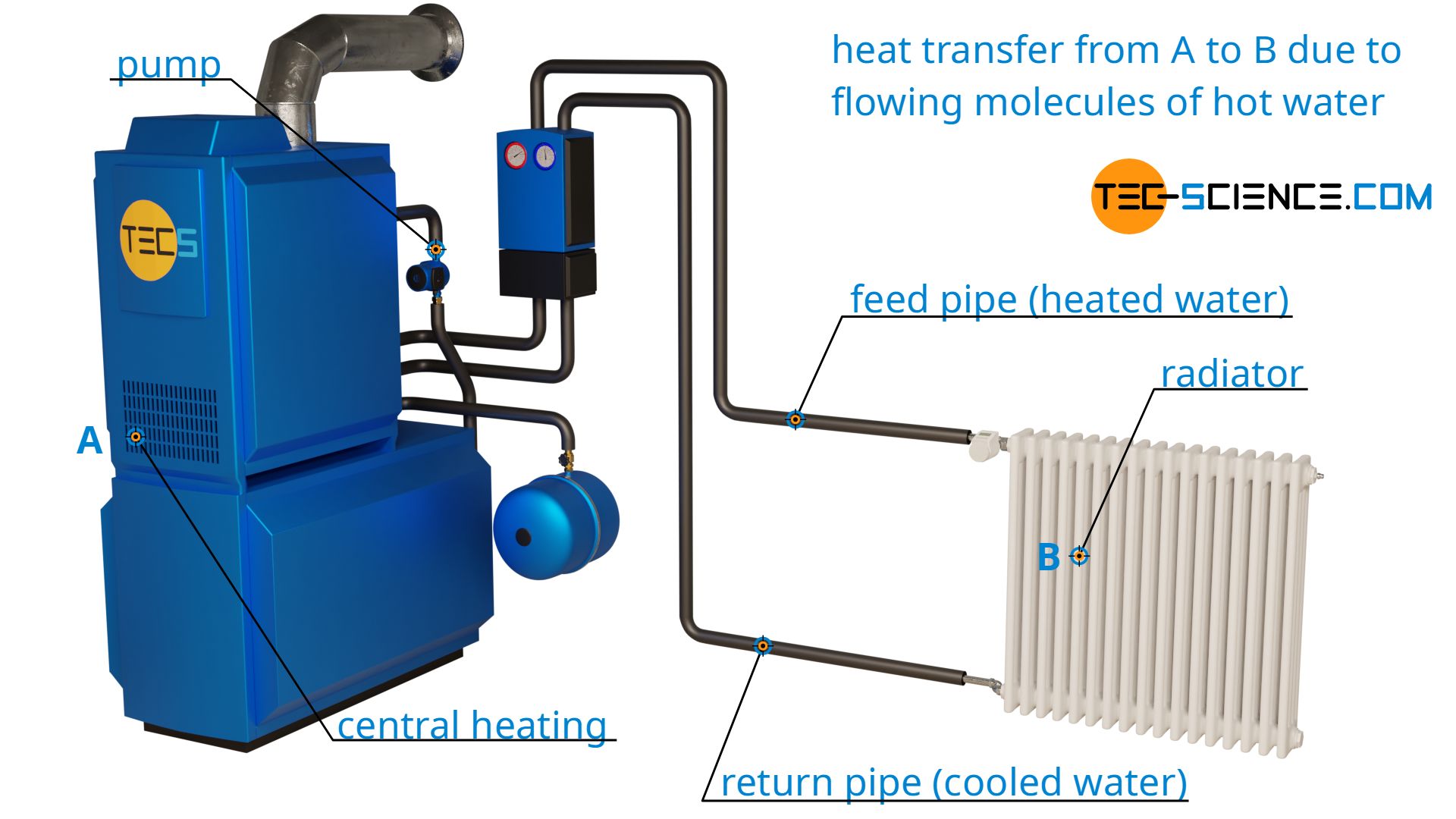 With heat transfer by thermal convection, heat is transported with a flowing substance. Convection only occurs in fluids, i.e. gases and liquids.

One possibility of heat transfer is that hot substances flow from one place to another and transport thermal energy accordingly. Such a transfer of heat is referred to as thermal convection. This type of heat transfer will be explained in more detail by the following examples and a simple experiment.

A heat transfer by thermal convection is found, for example, in a hair dryer. The heat source is a heating coil which heats the surrounding air. In order that this warm air now reaches the wet hair, a fan creates an airflow. This causes the heat to flow from the heating coil to the hair.

Another example that follows the same principle of heat transfer by convection is the central heating system. However, this does not transport the heat via an air flow, but via a heated water flow. The water flow is driven by a pump. This pump transports the water heated in the boiler via a pipe to the radiator (called feed pipe). In most cases, several radiators are arranged in series. For simplicity, however, only one radiator is shown in the figure below. After all radiators have been passed through, the cooled water flows back to the boiler via a pipe (called return pipe). There it is reheated and the cycle starts all over again.

Another example of thermal convection is the cooling of a chip of a graphics card (GPU). A solid metal body (called heat sink) with cooling fins sits on the chip. The GPU heat absorbed by the heat sink must be removed as quickly as possible to avoid overheating. This is done by a fan that is placed on top of the GPU and generates an air flow that passes through the cooling fins. The airflow absorbs the heat and then blows it away.

However, the fan is not always active. If the chip doesn’t produce a lot of heat, e.g. if it doesn’t have to do complex calculations to display graphics like in games, the fan usually stays off. In this case the natural effect that warm air is lighter than cold air is sufficient to transport the heat away from the heat sink. This means that the heated air rises by itself and transports the heat with it. So there is no need for an active fan to create a flow (although there is usually an air flow due to the PC fans).

To demonstrate the heat transfer by thermal convection, a simple experiment will be shown. A bent glass tube is filled with water. The water is colored in the lower part. This makes it easier to observe the flow of the water later. Now a Bunsen burner is attached laterally at point A, while a thermometer is inserted into the tube from above at point B. If the Bunsen burner is now turned on, a rise in temperature can be observed after a short time.

Obviously, heat energy was transported from heat source A (Bunsen burner) to point B (temperature sensor), where it caused a temperature increase. The heat was transferred by means of water molecules. These were first set in motion by the Bunsen burner at point A and caused the water temperature to rise accordingly. Due to the lower density of the warm water, the “hot” water molecules rose to point B and caused the thermometer to heat up accordingly. The rising of the hot water could be easily observed by means of the color particles introduced.

The principle of heat transfer by thermal convection is that the “hot” particles flow from a point A to B over a macroscopic distance. In this case, heat flows along with the substance , so to speak. In the experiment described above, water serves as the carrier medium for heat or, in the case of the hair dryer, air. The word convection comes from the Latin term convectum which means to carry. According to this literal meaning, heat is carried along with a substance. The animation below illustrates the principle of thermal convection.

With thermal convection, heat flows along with a flowing substance. Convection only occurs with flowing materials, i.e. with gases and liquids. These are also called fluids (from the lat. fluidus for “flowing”).

The drive for thermal convection can, as in the case of the above experiment, be caused by differences in density that occur naturally when a liquid or gas is heated. However, gravity can also directly cause such natural flow processes. For example, think of a river that flows over a waterfall into another body of water. In such cases one speaks therefore also of natural convection or free convection.

Natural convection or free convection refers to heat transfer by currents caused either directly by gravitational forces or by density differences between the cold and warm spots in a liquid or gas.

The formation of natural convection currents can be seen, for example, when water is heated in a pot. The thermal image below shows in real speed the temperature behavior during the heating of water in a pot. It becomes clear that the heated and thus “light” water rises from the heat source in the middle of the pot and is transported to the outside, while the cooler and thus “heavier” water sinks in the peripheral areas. The cooler water at the bottom is then heated by the hotplate and rises to the top when heated. This results in a natural mixing, which accelerates the heating of the water enormously.

If the water were heated from above instead of from below through the stove top, convection currents would not form to the same extent. Eventually, the cooler water would gather at the bottom, without a heat source there. The already heated water, on the other hand, would remain near the water surface. There would be no mixing and the heating process would be very slow in this case (mainly by heat conduction, and water is actually a relatively poor heat conductor as is shown in the linked article on an experiment).

If, on the other hand, convection currents do not occur naturally due to differences in density or due to gravity, but are forced by mechanical means, then one speaks of forced convection. Stirring around in the cooking pot described above with a cooking spoon would then be such forced convection. Also the heat transfer of a hair dryer or a central heating system are forced processes. In the case of a hair dryer, a fan forces the heat flow and in the case of a hot water heating system, a pump. Also the mentioned fans for the cooling of PC components are used to generate forced convection currents.

If convection currents are forced in a mechanical way (e.g. by a fan or pump), this is called forced convection.

If as much heat as possible is to be transported, water is used very often. This has several reasons.

On the other hand, water in liquid state can flow very well and is available almost free of charge compared to other liquids. These properties make water an excellent medium for heat transport by thermal convection. This is why water is used in heating systems or as a cooling medium in cars or in gaming PCs to cool electronic components.