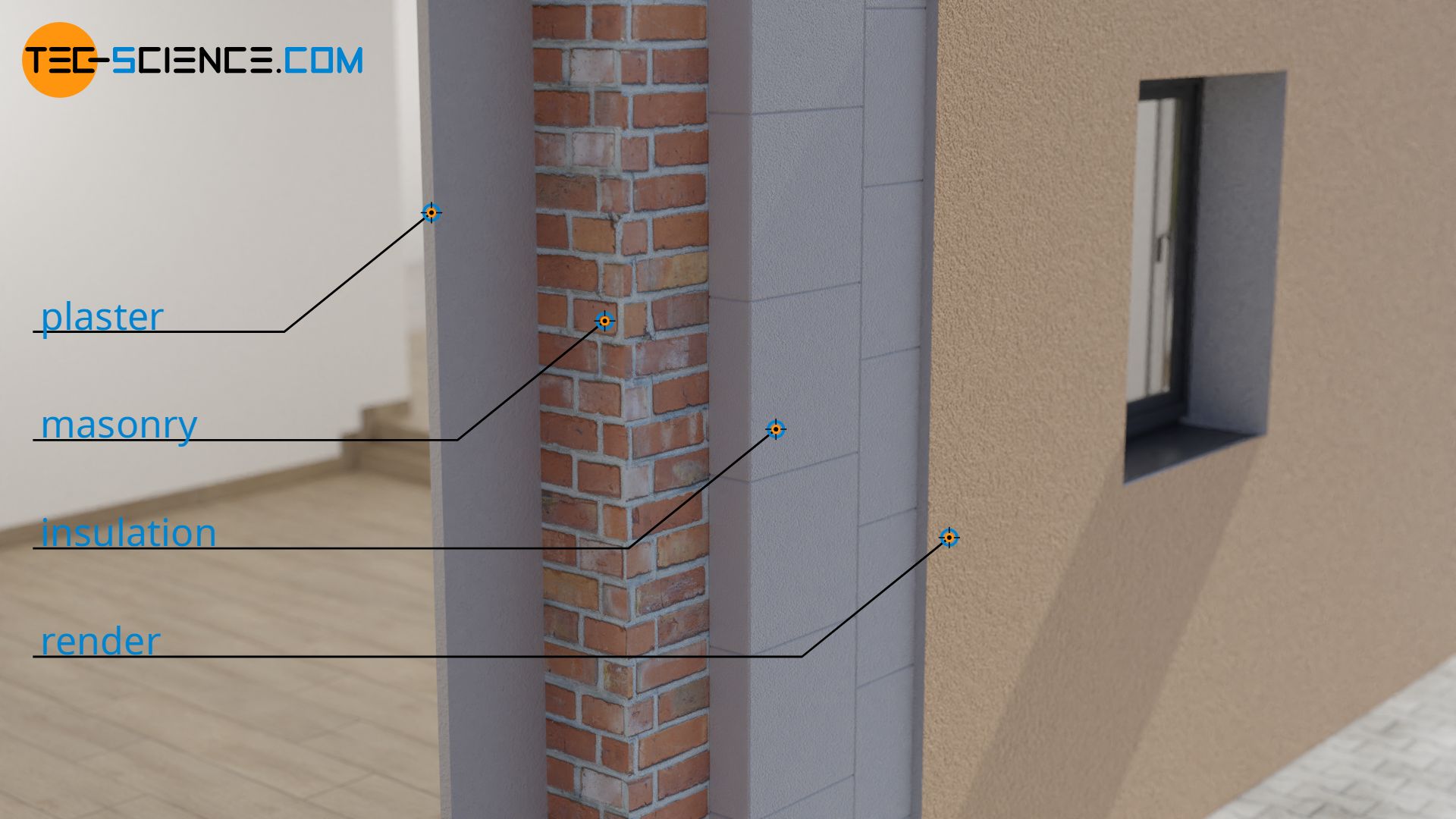 The thermal transmittance (U-value or U-factor) describes the heat transfer through a solid object, which is located between two fluids (gas or liquid) with different temperatures.

Definition and unit of the U-value

The U-value U indicates how much heat energy per unit time and unit area is transmitted through a solid object at a temperature difference of the fluids of 1 Kelvin (1 °C). The U-Value is therefore also called thermal transmittance.The U-value is therefore given in the unit “Watt per square meter and Kelvin” W/(m²⋅K). The heat transferred per unit time and unit area is also called heat flux q*.

The higher the U-value, the more heat flows through an object within a certain time and the lower the insulation. Low U-values therefore mean good thermal insulation properties.

According to equation (\ref{def}), for a given temperature difference ΔT in the steady state, only the amount of heat Q passing through a surface area A within the time Δt has to be determined. Special heat flow meters (HFM) are used to measure the heat flow.

Significance of the U-value

The U-value is particularly important for the envelope of buildings. In building engineering, the fluids are air. In this case, windows, masonry, plaster or other insulating materials serve as heat transmitting solids. These components should prevent the heat transfer between the interior of the house and the environment as much as possible. With regard to thermal insulation, the aim is always to use materials with the lowest possible U-values in order to achieve the greatest possible insulation effect.

Using the U-value of objects, the heat flux q* passing through a component can be determined from the present temperature difference ΔT:

If the area A of the object is known, then the rate of heat flow Q* transmitted through the component can be determined:

The amount of heat Q that has passed through over a time duration Δt is then finally obtained by the following formula:

Calculation of the U-value (thermal resistances)

The thermal conductivity λ of a material indicates how much heat per unit time and unit area flows through the material at a given temperature difference ΔT.

The greater the thermal conductivity of the material, the greater the heat transfer due to thermal conduction. For a given temperature difference, the resulting heat flux q*λ is significantly dependent on the thickness Δx of the material (see Fourier’s law) – for example, within a certain time less heat passes through a thick wall than through a thin wall.

Since the combination of thermal conductivity and thickness of the material is a property of the component, these quantities are combined to new quantity: the thermal transmittance of conduction Λ. Note that this quantity does not describe the overall thermal transmittance (U-value) of the component but only the heat transfer due to thermal conduction):

The thermal transmittance of conduction is a component-dependent quantity that describes the heat transfer through a component due to thermal conduction!

The thermal resistance of conduction is a component-dependent quantity that is a measure for thermal insulation of a component with regard to thermal conduction!

The heat transfer coefficient α describes how much heat per unit time and unit area at a given temperature difference ΔT flows through the interface between a fluid and a solid or vice versa.

The index s stands for surface, and expresses that this heat flux refers to the interface between fluid and solid.

Remark: In building engineering, the heat transfer coefficient is often denoted by the letter h instead of α.

The thermal resistance of convection is a component-dependent quantity that is a measure for thermal insulation of a component with regard to thermal convection!

In this respect, thermal radiation is already taken into account by the thermal resistance of convection according to equation (\ref{rk}):

In order to also take measures to limit heat loss through radiation, hot water pipes are therefore usually wrapped with reflective foil in addition to a thermal insulating layer. This minimizes radiation losses due to the reflections taking place and thus prevents heat transfer by radiation to the greatest possible extent.

Note that the thermal resistance of convection on the inside is usually different from that on the outside. This is especially true if a component is made of different material layers and the outer and inner surfaces are therefore made of different materials, each of which has a different thermal resistance. Especially in buildings, wind speeds also play a role, which are obviously different inside the building than outside. This also means that the convective heat transfer on the inside of the wall is different from that on the outside.

If the considered component is an assembly of several different material layers, the sum of the respective thermal resistances is to be taken as a basis (note that there is no thermal convection between the individual layers):

Example of U-value calculation in the envelope of a building

In the following, the U-value of a building wall will be calculated. From inside to outside, the wall is constructed as follows:

For a simplified calculation, the following values for the thermal resistances of convection depending on the direction of heat flow are given according to DIN EN 6946:

The values of thermal conductivity of the specified material layers can be found in table books. With the respective layer thickness the thermal resistances of conduction can be determined according to equation (\ref{a}):

The reciprocal value of the total thermal resistance finally gives the U-value of our building wall:

The U-value of the wall is 0.17 (mostly designated without units) and is thus below the value of 0.24 as prescribed by the German Energy Saving Ordinance (EnEV). In this case the U-value is significantly influenced by the thermal insulation layer, without which the U-value would be 1.11. Without thermal insulation, the heat loss through the building wall would therefore be about 6.5 times as high.