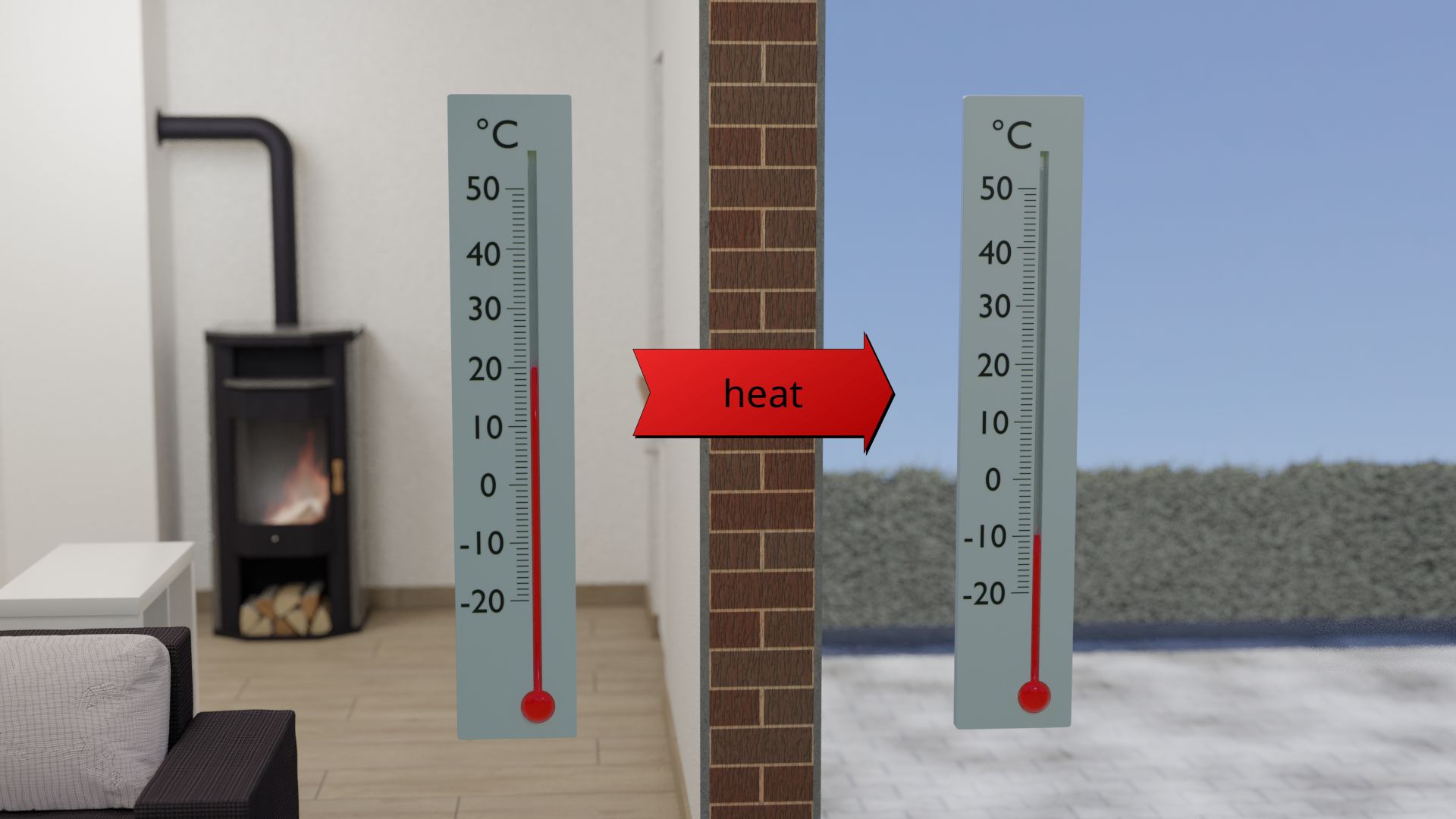 Thermal conductivity is a measure of how well or poorly a material conducts heat energy (measure of the strength of heat conduction)!

In general, heat can be transferred in three different ways (for more information on the different types mentioned below, see the article Heat transfer):

Especially in solids, heat conduction is of great technical importance, but also in thin gases at elevated temperatures, heat conduction predominates over thermal radiation and convection. Thus, for example, house walls or insulation panels foamed with air should only conduct heat to a small extent. This ensures that in winter only a small amount of heat penetrates the building walls to the outside. This prevents the building from cooling down too quickly. But this has also the advantage that, with low heat conduction, only a small amount of heat penetrates into the building from the outside in summer. In this way, the inside of the building remains pleasantly cool.

Due to the special importance of heat conduction, it will therefore be characterized in more detail in the following. Everyday experience already shows that different materials conduct heat better than others. Metals are generally very good heat conductors, whereas plastic or wood usually conduct heat only to a lesser extent. For this reason, handles on hot metal objects such as oven doors, for example, are made of wood (see also the article Human thermal response). For the same reason, metal kettles usually have a plastic handle.

Independent of the material, the first question that arises is what other parameters influence how much heat a material conducts.

Influence of the temperature difference

The heat flow through an object is all the greater, the greater the temperature difference from one side of the object to the other!

Influence of the thickness of the material

Radiators in older buildings, which for optical reasons are somewhat recessed into the building walls (radiator niches), are therefore very unfavorable in two respects for energetic reasons. On the one hand, the building wall is relatively thin there, which already causes a large heat flow. On the other hand, the heating system is also located there, i.e. there is a very high temperature on the inner wall. The temperature difference between inside and outside is also relatively high, which increases the outgoing heat flow even more! The installation of reflective foil behind the radiator brings (contrary to what many manufacturers claim) almost no perceptible insulation effect. Reflective foil only helps against thermal radiation, but not against the far greater effect of heat conduction!

The heat flow through a heat-conducting object is the smaller the thicker the object is!

Influence of the surface area of the material

The heat flow is also directly dependent on the area through which the heat flow passes, i.e. the cross-sectional area perpendicular to the direction of the heat flow. In the case of a building wall, this is the area of the wall. The larger the area, the more heat can pass through the surface or object. Consequently, the heat flow is also relatively high for large surfaces. Therefore, heating costs are generally higher for buildings with many large windows (which usually conduct the heat better than the building walls) than in buildings with only a few small windows. A lot of heat penetrates through the large window area, i.e. the heat flow through it is relatively high.

The reduction of a heat flow by a reduction of the surface area is unconsciously also apparent in us humans. The crouching of the body in cold weather is exactly such an instinctive behavior, which is based on the principle of reducing the surface area. Of all geometric shapes, the sphere has the smallest possible surface area in relation to its volume and is therefore extremely favorable from an energetic point of view. By cowering together one tries to take on the shape of a sphere. With this one is trying to create the smallest possible surface area in contact with the cold environment. In this way one achieves a low heat flow and the body stays warm longer.

A closer look shows that the heat flow is proportional to the surface area. This can be easily understood. For example, one can imagine two identical surfaces on a building wall. The same heat flow passes through both surfaces. Now, in your mind you take both surfaces together to form one large one, i.e. you double the surface. Obviously, twice the heat will then flow through twice the area. So the heat flow and the area are proportional to each other:

The increased heat flow through larger surfaces is used for example for radiators. For this reason, radiators are usually not built in one big flat piece, but consist of many exposed pipes. This increases the surface area, which leads to an overall greater heat flow. The apartment gets warm faster.

The operating principle of cooling fins is also based on the increase in surface area and the correspondingly higher heat flow. Only that in this case heat is not supplied but dissipated. This means that the object can be cooled more quickly. The figure below shows the use of cooling fins to cool the chip of a graphics card (GPU).

This relation applies independently of the material, i.e. for any material the heat flow will be proportional to the temperature difference and to the surface area and reciprocal to the thickness. However, by introducing a material-dependent proportionality constant λ this relation can finally be formulated as an equation. This equation is also known as Fourier’s law.

Fourier’s law describes the heat flow that passes through a material by heat conduction!

The proportionality factor λ in the above equation is called thermal conductivity and is largely determined only by the material of the object. The thermal conductivity is expressed in the unit W/(m·K) (“watt per meter and kelvin”). A thermal conductivity of e.g. 2.4 W/(m·K) means that with at a material thickness of one meter a heat flow of 2.4 watt (i.e. 2.4 Joules per second) passes through an area of one square meter if the temperature difference is one Kelvin.

Thermal conductivity is a measure of how well or poorly a material conducts heat energy. (“measure of the strength of heat conduction”)! It applies only to the heat transfer by thermal conduction, not convection or radiation!

It should be noted again that the thermal conductivity only describes the heat transfer by heat conduction inside a material. Heat transport at the interface due to thermal convection are not considered. When heat is transported through a building wall, there are generally many different materials that affect the overall heat transfer. From the inside to the outside this could be for example: wallpaper → plaster → brickwork → insulation wall → render. Such heat transfer through materials and their interfaces are discussed in more detail in the article Thermal transmittance (U-value).

Information on the experimental determination of thermal conductivity can be found in the linked article.

Equation (\ref{q}) describes the heat flow as a function of geometric quantities of the material such as area and thickness. By rearranging this equation, however, these geometric dependencies can be easily eliminated:

Heat flux is the thermal power per unit area!

In this context, the thermal conductivity of a material thus describes the relationship between an existing temperature gradient and the resulting heat flux. The thermal conductivity of 2.4 W/(m·K) already mentioned as an example can therefore also be interpreted as follows: At a temperature gradient of 1 K/m a heat flux of 2.4 W/m² passes through the material. In this interpretation, neither the surface area nor the thickness of the material plays a role. These quantities are already “included” in the heat flux and the temperature gradient, so to speak. The above equation is therefore independent of geometrical properties!

Also the statement often heard in this context, that Fourier’s law only applies to one-dimensional heat flows with plane, parallel surfaces, is irrelevant in this context. Such a limitation applies only to the equation (\ref{q}), which describes the heat flow on a macroscopic scale, but not to equation (\ref{r})! Equation (\ref{r}) makes a statement about the heat flow density in a single point of a material depending on the temperature gradient there. Any surface has no relevance at all in such a point. Equation (\ref{r}) forms the basis for the heat equation, which also describes three-dimensional heat flows in arbitrarily shaped bodies with non-parallel surfaces.

The tables below show a selection of different materials and their thermal conductivity (see Wikipedia and energie-lexikon). The values given refer to a temperature of 20 °C. It can be seen that solids and especially metals have relatively high thermal conductivities, whereas polymers mostly have lower coefficients. Even lower values are generally found with liquids, which are only beaten by gases. The differences are mainly due to the characteristic atomic structure. More about this in the article Heat transfer by thermal conduction.

The thermal conductivity generally decreases from metals, polymers and liquids to gases!

What is striking about metals is the relatively high thermal conductivity of copper. This is why copper is often used, for example, as a material for building cooling elements such as PC coolers. Heat can thus be dissipated very quickly from the heat source. Silver would have an even higher thermal conductivity, but is much more expensive.