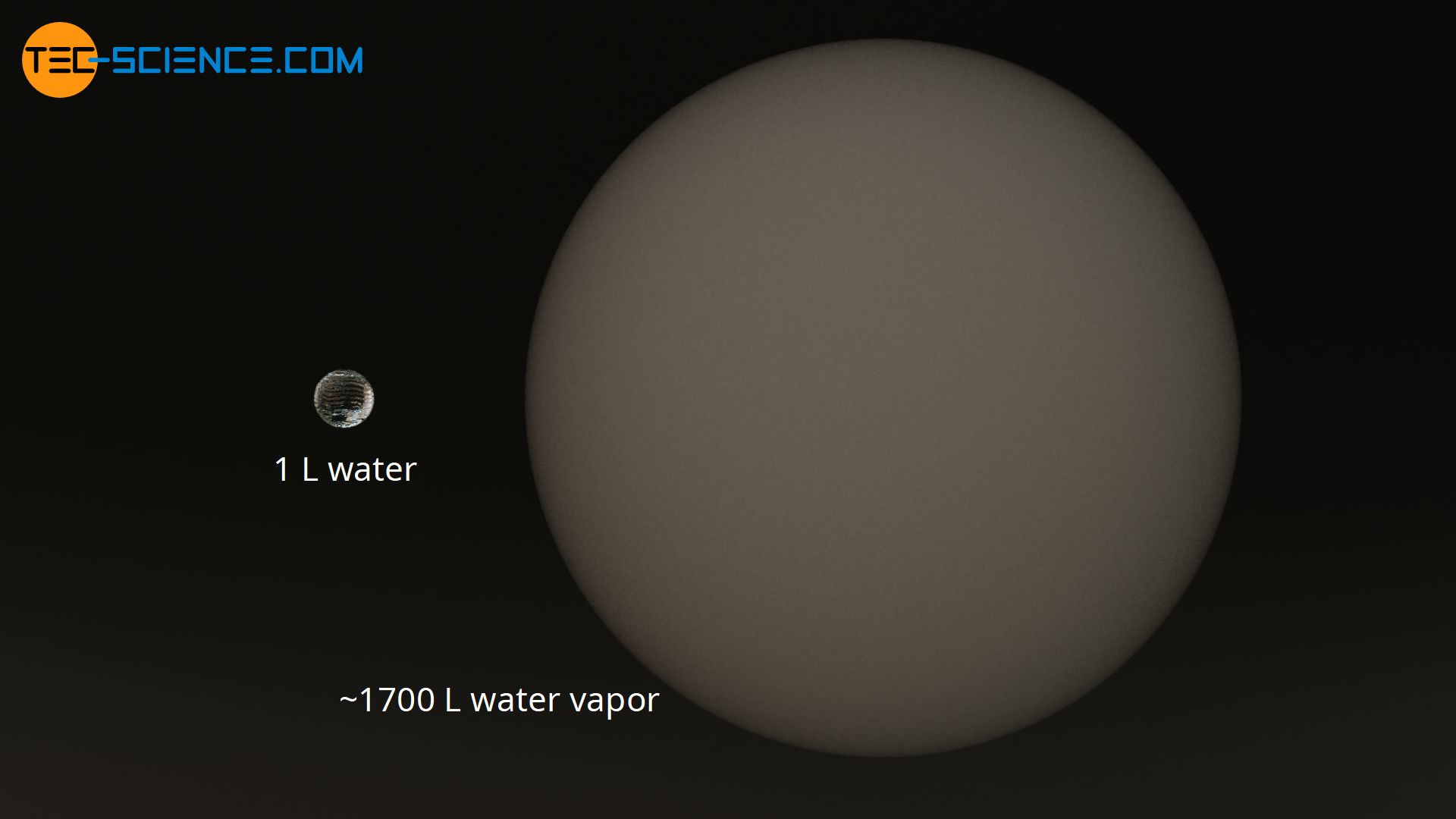 For isobaric vaporization, the added heat of vaporization (process quantity) leads to a change in the enthalpy of the substance (state variable).

Increase in volume during vaporization

In the article Specific latent heat of vaporization, it was explained that the heat of vaporization is necessary for breaking the intermolecular bonds. In fact, however, when a liquid vaporizes, it is not only the bindung energies that must be overcome. In general, a substance also expands greatly during vaporization. Steam, for example, occupies a volume almost 1700 times greater than liquid water at the same pressure of 1 bar. Thus, one liter of liquid water becomes about 1700 liters of water vapor after vaporization!

Energy is also required for this expansion of the volume of a substance against the acting ambient pressure (displacing the vapor into the environment). This energy to be added is also supplied in terms of heat and is already taken into account in the heat of vaporization! In most cases, vaporization takes place in an open system. The vaporizing liquid can thus expand freely at constant ambient pressure. This is also referred to as isobaric vaporization. In this case, the energy W required for the change in volume can be determined from the product of pressure p and volume change ΔV:

This energy is also referred to as pressure-volume work or displacement work due. Note, however, that this energy to be added is not supplied in the form of mechanical work, but also as heat. So don’t be misled by the term work.

The amount of energy required to generate the gas volume during vaporization can be thought of as the expansion of a balloon. Energy is required to inflate the balloon. In a figurative sense, this corresponds to the generation of the gas volume against the acting ambient pressure.

Note that the heat of vaporization and the enthalpy of vaporization are identical in value, but have different thermodynamic meanings! The enthalpy is a state variable which describes the energetic state of a substance on the basis of the internal energy and the pressure and volume (all three variables are state variables!). Heat, on the other hand, is a process quantity that only describes the process of energy transfer as heat into or out of a thermodynamic system. The heat of vaporization transferred across the system boundary is the cause of the change in enthalpy of the system.

Enthalpy of vaporization using the example of water

For water, the pressure-volume work during vaporization is to be determined in the following. At first, 1 kilogram of liquid water at a pressure of 1 bar occupies a volume of about 1 liter. After complete vaporization, the volume has increased to about 1692 liters (this value can be determined using the Van der Waals equation). The change in volume is therefore ΔV = 1691 liters. Consequently, an energy of around 169 kJ is required to change the volume: