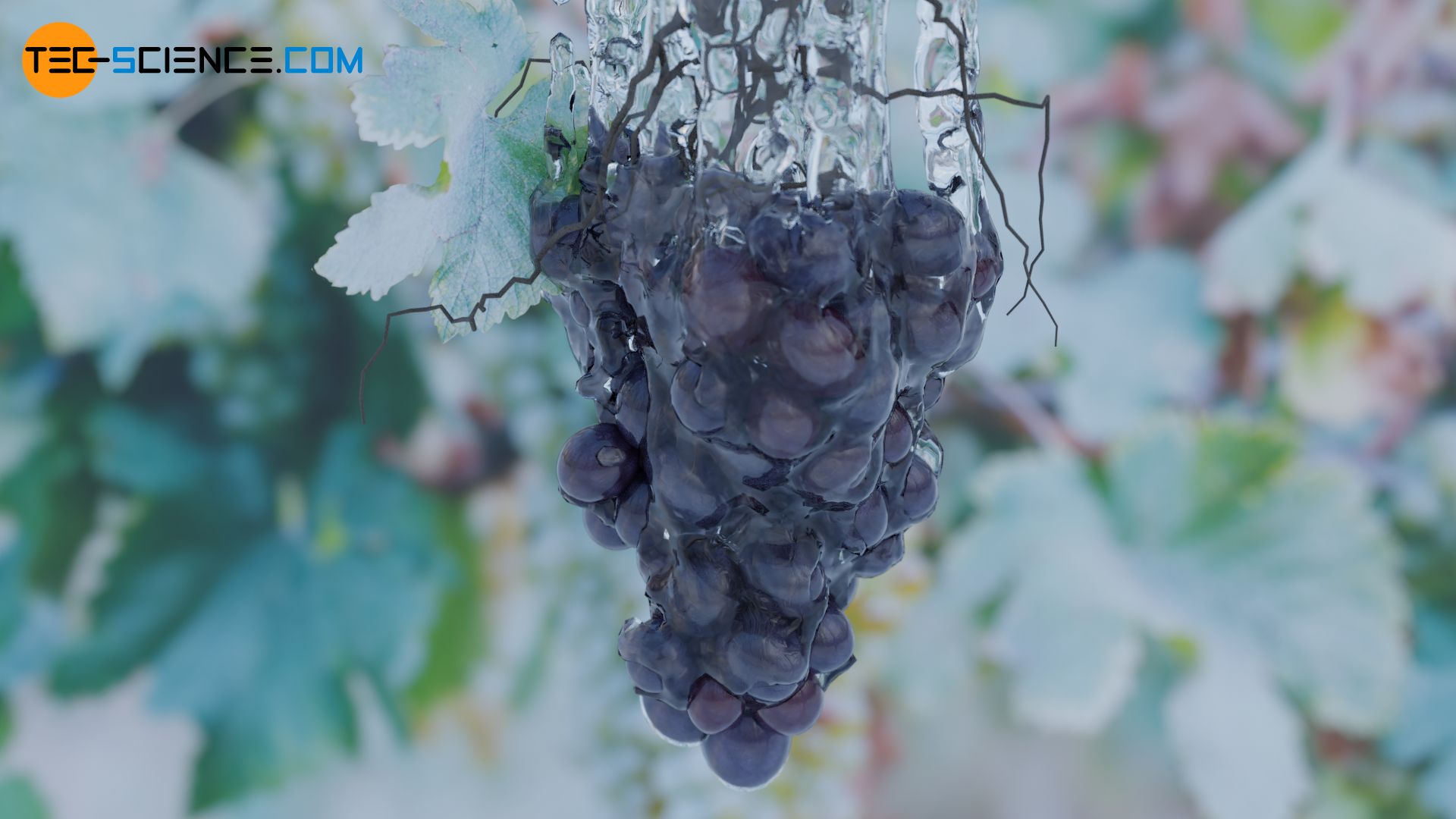 With sprinklers for frost protection, the crop stays protected from low temperatures by the heat of solidification released when the water freezes.

If growing fruits are exposed to sub-zero temperatures (frost) on cold spring nights, they are in danger of freezing. The harvest of entire vineyards or other plantations is in danger of failing. As paradoxical as it may seem at first, the solution is the freezing of the plants by sprinkling with water!

The sprayed water mist forms a water film around the plant, which then cools down. The solidification process of the water finally starts at a temperature of 0°C. During the freezing of the water, latent heat of solidification is released (also known as heat of crystallization). Thus, although heat is drawn from the plant by the cold environment on the one hand, heat is simultaneously added to the plant by the released heat of crystallization on the other hand. This ultimately means that the temperature does not drop further during the freezing of water and remains constant at 0°C despite the surrounding subzero temperatures. The plant is thus protected from temperatures below zero, which would otherwise cause the cell water in the plant to freeze.

The following example illustrates the enormous amount of heat released when water freezes. During the freezing of 1 kilogram of water, a latent heat of solidification of 334 kJ is released. With this amount of heat, starting from room temperature, you could bring 1 kilogram of water to a boil! This example shows how much heat is released when water freezes and thus protects the plant by preventing the temperature from falling below 0°C.

Note that the freezing point of the cell water of plants (and also of most other living organisms) is -2 °C, which is somewhat below the freezing point of water anyway, due to the substances dissolved in it. The plants thus have a kind of natural frost protection. Since the temperature of the water freezing on the plant does not drop below 0 °C during, the cell water inside the plant remains liquid.

During sprinkling with water, the crops or plants remain protected from sub-zero temperatures due to the heat of solidification released during freezing!

Of course, this method only works as long as the solidification process continues and thus the release of heat of solidification is ensured, so that the temperature in the plant does not drop below 0 °C. Therefore, this method must be maintained by permanent sprinkling with water as long as there is a risk of the plant freezing due to frost. If, on the other hand, the sprinkling of water were interrupted, the water film would freeze completely. After complete freezing, the temperature of the plant would drop below 0 °C and the plant would eventually freeze to death!