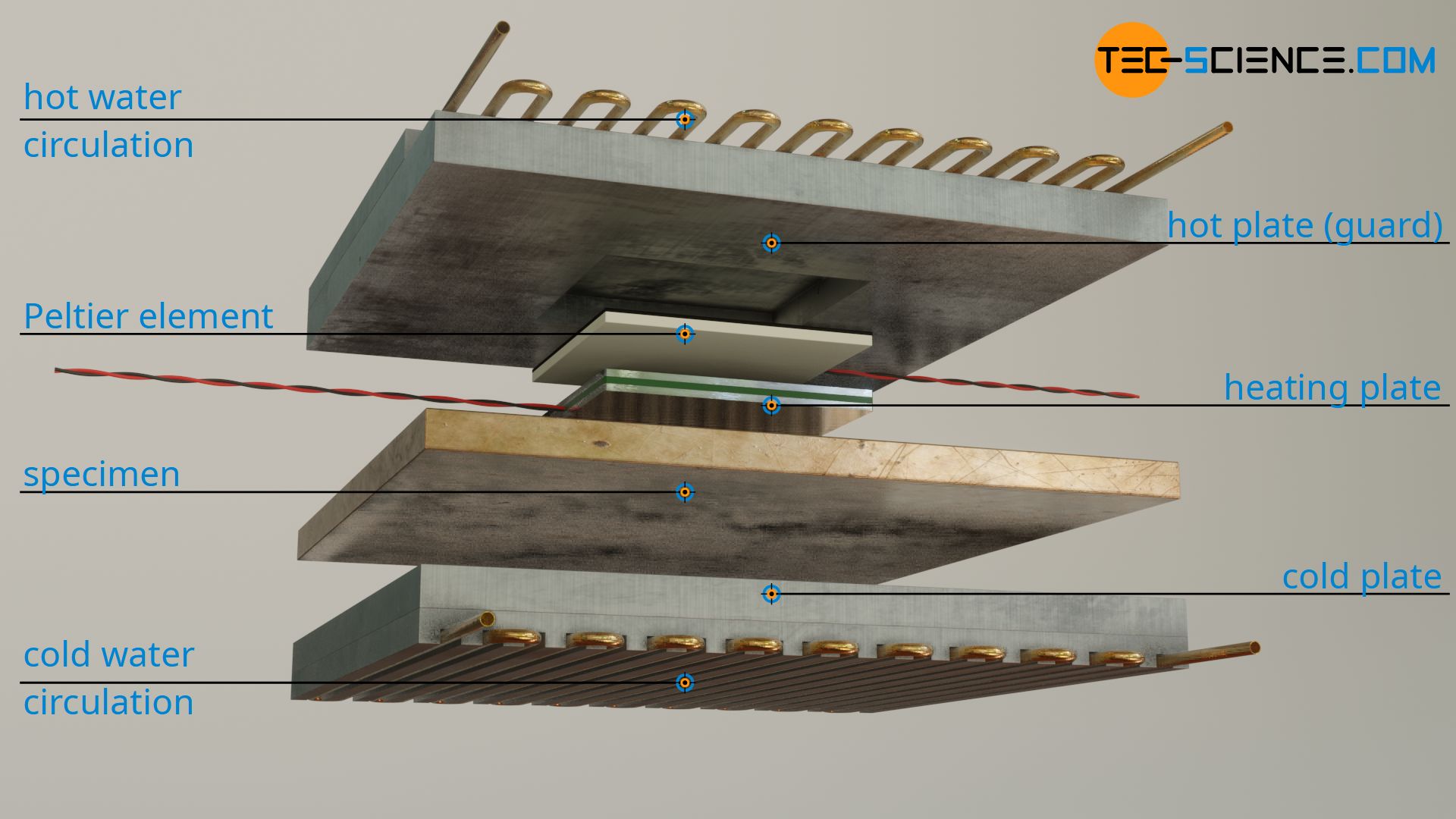 With the Guarded-Hot-Plate method (GHP) the thermal conductivity is determined by the electrical power output of a hot plate with guided heat conduction.

Thermal conductivity is a measure of how well or poorly a material conducts heat. The rate of heat flow Q* through a material can be determined by the following equation. In this equation, Δx denotes the thickness of the material along which the heat flows and A is the area through which the heat passes. The temperature drop ΔT corresponds to the temperature difference along the thickness Δx of the material. For these given parameters, the heat flow ultimately depends on the property of the material and is described by its thermal conductivity λ.

This means, that the thermal conductivity λ of a material can be determined by generating a heat flow Q* through a slab-shaped sample of thickness Δx and area A and measuring the temperature difference ΔT:

In the article Experimental setup for determining the thermal conductivity, an experiment based on this idea has already been explained. However, there was a temperature difference and the heat flow rate was determined by melting of an ice block. With the Guarded-Hot-Plate method, which will be presented in the following, the heat flow is generated by an electric heater and the resulting temperature difference is measured.

Design of a Guarded-Hot-Plate apparatus

With the guarded hot plate method, a material sample is heated from one side by an electrically heated plate. The heat output (= rate of heat flow) corresponds to the electrical power supplied to the heating. The heating plate is embedded in a recess of a metal plate (called guard), which is separately tempered to the same temperature as the heating plate. In most cases the temperature of the guard is controlled with hot water circulation system. The bottom side of the sample is also often temperature controlled with water, but with a lower temperature.

The generation of the heat flow by a heated hot plate and the surrounding guard gives this method the name Guarded-Hot-Plate method (GHP).

With such an apparatus, an easily measurable temperature difference ΔT is obtained over the sample thickness Δx. Using the supplied electrical power Q* (= heat output) the thermal conductivity λ of the specimen can finally be determined. The area A to be taken as a basis for the calculation corresponds to the area of the heating plate, since the heat emitted ideally penetrates the sample along a straight path and therefore refers to this area. In order to come as close as possible to this ideal case where heat only flows in one direction and not to let any heat flow off to the side, the guard is there. This will be discussed in more detail in the next section.

This is exactly where the guard comes into play, whose basic idea has already been explained in detail in the article Experimental setup for determining the thermal conductivity. Such a guard is only a solid metal body with a recess into which the heating plate is inserted. As far as heating is concerned, the heating plate and the guard are two completely separate systems, even if both are heated to the same temperature. While the heating plate is heated electrically, the guard is usually temperature controlled with a water circulation system (even if theoretically a second electric heater could be used).

The two-dimensional heat flows can be further minimized by placing the apparatus in a closed housing to reduce convection flow at the edges of the sample. In addition, the inside of the housing can also be temperature controlled by heating rings to further optimize the required one-dimensional heat flow. This is particularly relevant for thermal conductivity measurements with increased or decreased temperatures.

Monitoring the temperature of the heating plate and guard

Field of application, advantages and disadvantages