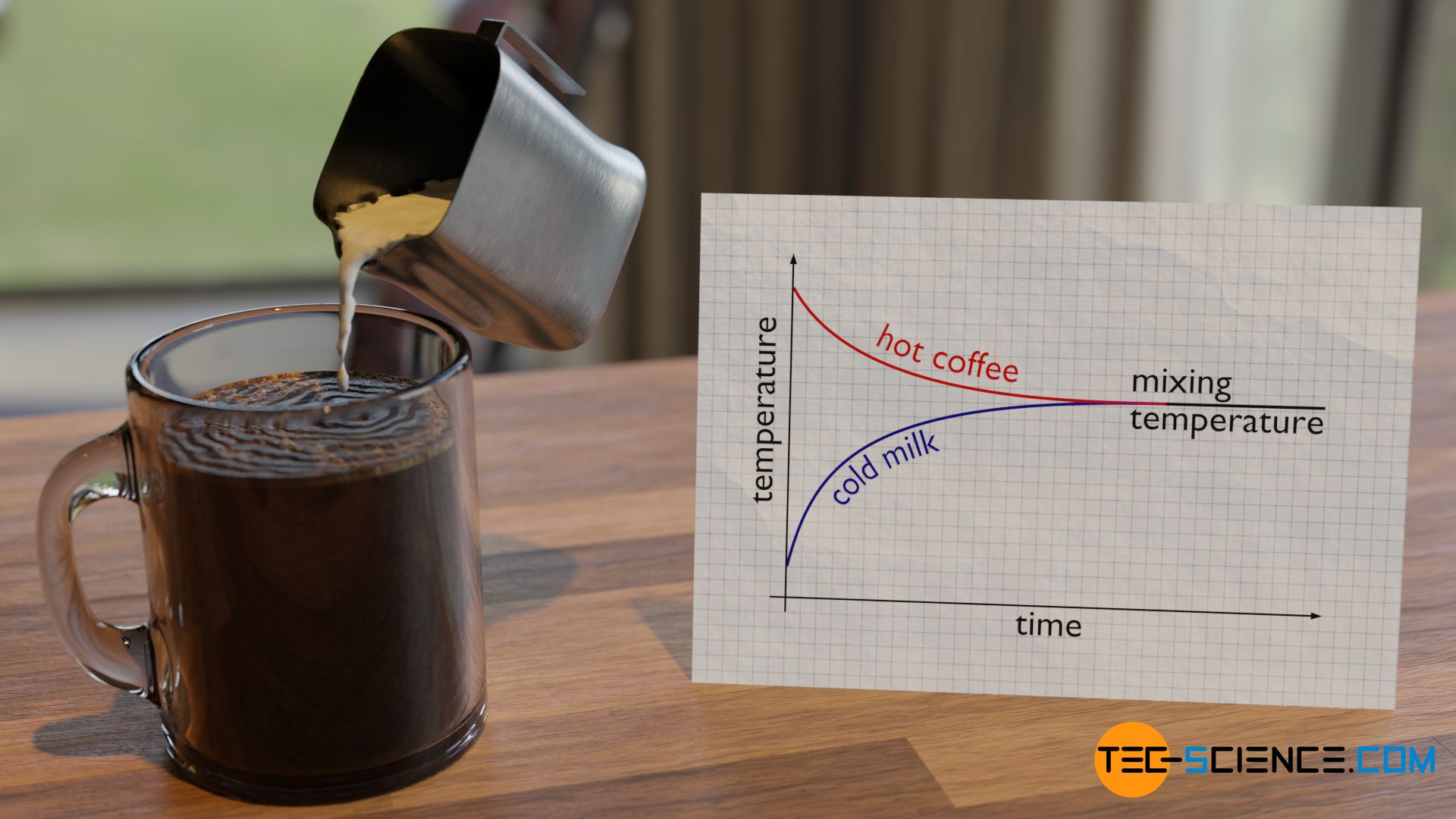 In thermodynamics, heat is the transport of energy due to a temperature difference. Heat in this respect is never “contained” in an object!

Equalization of temperature of two substances

With the help of the particle model of matter, this process of temperature equalization can be clearly understood. First, the particles in coffee have a higher kinetic energy than those in milk because of the higher temperature. In simple terms, the molecules in coffee are faster than those in milk. When the milk is poured into the coffee, the different particles constantly collide due to their Brownian motion. The “cool” and therefore slow milk molecules are hit by the “hot” and therefore fast coffee molecules.

The relatively slow milk molecules become faster as a result. This is accompanied by an increase in temperature. Conversely, the fast coffee molecules are slowed down by the slow milk molecules when they collide. The fast coffee molecules are thus slowed down, which is accompanied by a reduction in temperature. This exchange of energy between the milk particles and the coffee particles eventually leads to a mutual approximation of the kinetic energies over time and thus to a common mixing temperature (see also the article on the Equipartition theorem).

One can clearly understand the balancing of kinetic energy with the following model. For this purpose, two chambers are considered, which are initially separated from each other by a dividing wall. In the left chamber there are balls that move relatively fast. In the right chamber, however, the particles move relatively slowly. The balls in the left chamber thus represent a substance with high temperature and the balls in the right chamber represent a substance with low temperature.

If one now opens the dividing wall, the balls of different speeds collide permanently. This causes the faster balls to transfer part of their kinetic energy to the slower particles. After a sufficiently long time, the energies have equalized and a common mixing temperature has been reached.

In the model described in the previous section as well as in reality, collisions still take place between the particles even after the mixing temperature has been reached. However, from a macroscopic point of view, these collisions no longer lead to a (net) exchange of energy. While a particle may become faster again at one point, another particle slows down at another point. From a macroscopic point of view, the thermal state of equilibrium is thus maintained. In this context one also speaks of a so-called dynamic equilibrium or in this case thermodynamic equilibrium.

Thermodynamic equilibrium is defined as a state in which there is no more exchange of energy at a macroscopically measurable level, i.e. in particular a common mixing temperature has been reached!

The concept of heat

In the thermodynamic sense, heat therefore only refers to the actual process of transferring energy from a hot object to a cooler object. For this reason, heat is a so-called process quantity (see also article The process quantities: heat and work).

In thermodynamics, heat is usually denoted by the symbol Q. Since it is an energy quantity, it has the unit J (“Joule”).

The terms temperature, heat and internal energy are not correctly distinguished, especially in everyday life. However, this is important for understanding thermodynamics. For this reason, we would like to clarify the terms with an illustrative example.

Two vehicles driving one behind the other are considered. In front is a relatively slow motorbike, followed by a faster moving car. Both vehicles can be assigned a certain kinetic energy according to their speed and mass. This kinetic energy stands in the figurative sense for the temperature of a substance.

The term heat only comes into play when the faster car hits the slower motorbike. In this case a part of the kinetic energy is transferred from the car to the motorbike. It is precisely this “impact energy”, which is transferred due to the different speeds (“different temperatures”) during the collision, that corresponds to heat in the figurative sense.

In this case, the energy transfer is used to make the slower motorbike faster (increase in kinetic energy), i.e. to increase the temperature in a figurative sense. At the same time, the faster car loses exactly this amount of energy and thus becomes slower (reduction of kinetic energy). Consequently, the temperature is reduced in the figurative sense. To the same extent as the overall energy state of the faster car decreases, the overall energy state of the motorcycle increases due to the conservation of energy (deformation energies are neglected).

*) The term “releasing heat” is often used and can hardly be avoided linguistically, but is fundamentally misleading. It suggests that an object contains heat, which it can release. However, heat is never the content of an object and therefore cannot be given off. Heat refers only to that amount of energy that is drawn from the internal energy of one object and which is used to benefit the internal energy of the other object!

Therefore, the absorbed heat of an object does not necessarily have to benefit the kinetic energy of the molecules, but can benefit the different forms of internal energy. Consequently, a heat supply does not necessarily have to be associated with a temperature increase. A simple example that illustrates this is the evaporation of water on a hotplate. In spite of the permanently supplied heat of the hotplate, the temperature of the water does not change during evaporation. In this case, the heat supplied obviously does not result in an increase in temperature. Rather, the heat during evaporation is used to change the binding energies (which are part of the internal energy) so that the substance changes from the liquid to the gaseous phase.

Equalization of temperature of solids

The process of energy transfer by heat does not only take place in substances where the free movement of molecules can cause collisions, as is the case in gases or liquids. Even without a mixing of molecules, energy can be transferred between two substances as heat. This can already be seen in a simple experiment in which two solids with different temperatures are brought into contact with each other. Although the molecules of the two solids obviously cannot mix, an equalization of the temperature can be observed there as well over time.

In this case the energy transfer can be traced back to the oscillating particles at the contact surface of the two bodies. Thus the more strongly vibrating molecules of the hotter object collide at the contact surface with the weaker vibrating molecules of the cooler body. As a result, the relatively slowly vibrating particles of the cool object are excited to stronger vibrations or the strong vibrations of the hotter body are “damped”. This also gradually leads to an equalization of the different vibration intensity and thus to an equalization of the temperature.

However, a transfer energy as heat can also occur without direct contact between two bodies! This is due to the fact that every body emits electromagnetic radiation depending on its temperature (see article Blackbody radiation). This temperature radiation is made visible in thermal imaging cameras, for example. The electromagnetic heat radiation can cause the molecules of another object to vibrate without direct contact with it.

More information on how heat can be transferred can be found in the article Heat transfer.