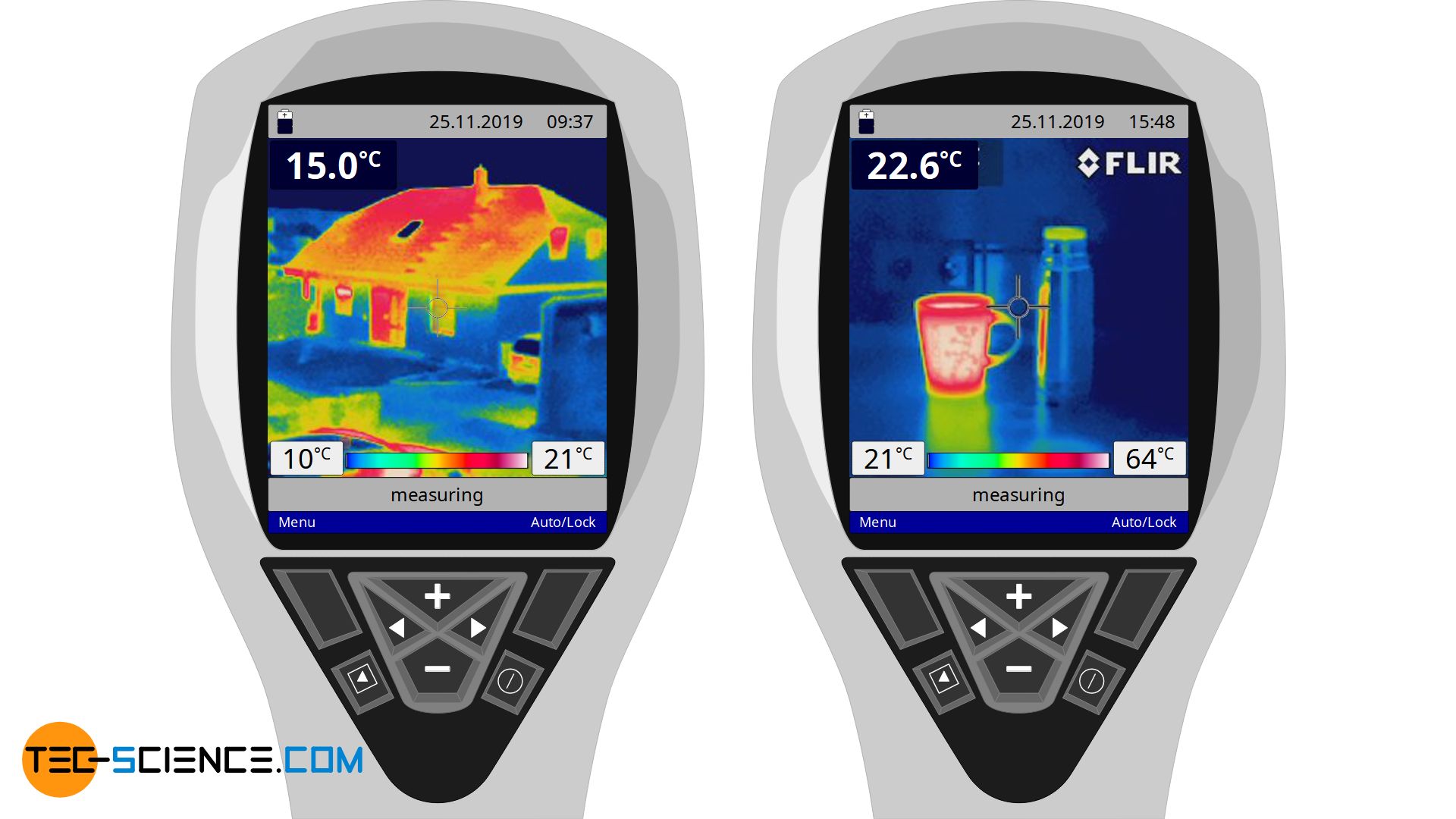 Heat transfer is the transport of thermal energy from a warmer object to a cooler object. A distinction is made between convection, conduction and radiation.

The figure below shows a thermal image of a building. Due to the color coding, the spatial temperature distribution is clearly shown. In this case, the cooler areas are shown bluish and the hotter areas reddish to white. From this, conclusions can be drawn as to where the heat flows out of the building relatively strongly.

While in this case the walls are obviously relatively cool and the heat hardly penetrates through them, the heat increasingly escapes through the window pane to the outside. Especially in the cold season, one is interested in avoiding such heat flows. In this way, the interior of the building does not have to be heated excessively, which is not only good for the environment but also for your wallet!

The next example shows a cup filled with hot tea and in comparison tea in a vacuum flask (thermos). It can be seen that in the case of the cup, the heat obviously penetrates very strongly to the outside, which leads to a large warming of the cup. The temperature on the outside of the thermos, however, is much lower (the red stripe on the thermos in the thermal image is only the reflection of the cup’s thermal radiation!). This is an indication that the thermos effectively prevents the flow of heat. It can therefore be assumed that the tea does not cool down as quickly in the thermos as in a cup.

In contrast to the cases just mentioned, there are also applications where a strong heat transfer is desired. Namely, wherever heat needs to be dissipated as quickly as possible. This applies, for example, to the chip of the graphics card shown below. The heat must be taken away from the chip as quickly as possible to avoid overheating. For this purpose, a metal body called heat sink with cooling fins is attached, which conducts the heat very well away from the chip and transfers it to the surrounding air. In the case of more powerful graphics cards with greater heat generation, fans are also fitted to blow the heated air away from the cooling fins even faster.

With thermal convection, heat is transported together with a streaming substance. An example for such a heat transfer by thermal convection is a hot water heating system that heats water in the boiler and then transports it to the radiator via a pump.

Heat transfer by thermal convection is only possible with substances that have the ability to flow. This therefore only applies to gases and liquids (called fluids). In solids, on the other hand, heat cannot be transported by flow processes because the particles contained in them are firmly bound to a certain location. Heat transfer by thermal convection is therefore not possible in solids.

More detailed information on heat transfer by thermal convection can be found in the linked article.

With heat transfer by thermal conduction, heat is transported through a material. This is the case with a radiator, for example. Its exposed pipes conduct the heat through the material to the outside and release it into the room air.

Thermal conduction occurs not only with solids, but also with liquids and gases. The principle of heat conduction is essentially based on collisions or oscillations of the particles contained in the substance. However, the particles do not move macroscopically over long distances, i.e. they do not flow through the material as is the case with thermal conduction. Rather, heat energy is only ever transferred from particle to particle.

In liquids and gases (and also in metals!), the heat energy is transferred mainly by collisions of the particles (in metals these are the electrons of the electron gas). In solids, on the other hand, the atoms excite each other to oscillate one after the other and thus transmit the associated heat energy from atom to atom.

More detailed information on heat transfer by thermal conduction can be found in the linked article.

Thermal convection and thermal conduction always require a substance or rather the particles contained therein to transfer heat. Heat transport by thermal radiation, on the other hand, takes place without the presence of a substance or particles. In this case heat is transferred by electromagnetic radiation and this also through the vacuum!

An example of heat transfer by radiation can be seen with the sun. Its radiation penetrates the vacuum of space and thus warms our earth. In principle, however, every body emits a certain amount of thermal radiation depending on its temperature (see also article Blackbody radiation). Thermal imaging cameras make this thermal radiation visible.

More detailed information on heat transfer by thermal radiation can be found in the linked article.