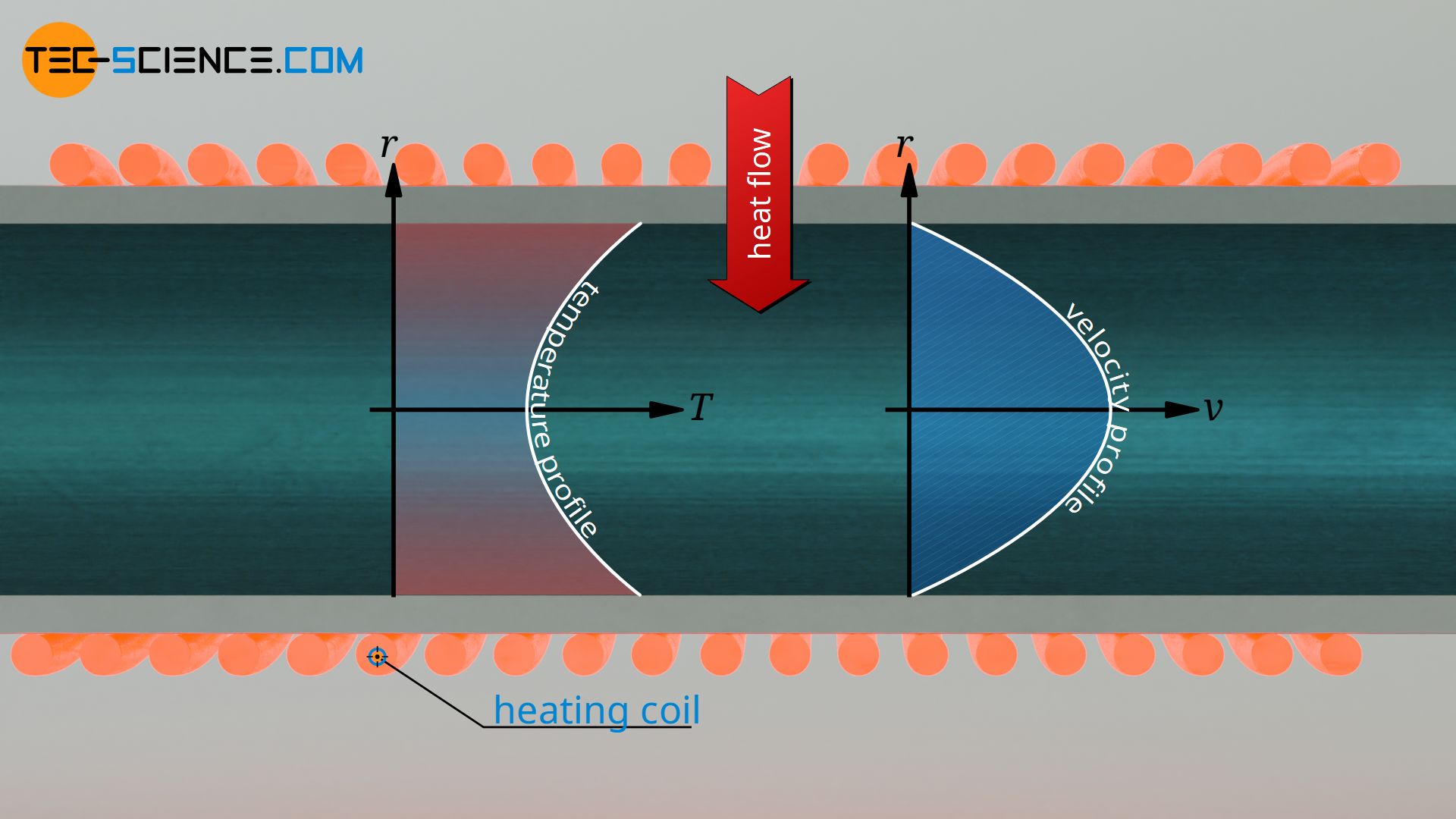 The Prandtl number is a dimensionless similarity parameter to describe the transport of heat and momentum.

The ratio of the thickness between the velocity boundary layer and the temperature boundary layer is reflected in the so-called Prandtl number. The dimensionless Prandtl number Pr is defined as the ratio of momentum transport (expressed by the kinematic viscosity ν) and energy transport by thermal conduction (expressed by the thermal diffusivity “a”):

Importance of the Prandtl number for technical practice

At this point one can already see the practical significance of the Prandtl number. If one investigates the convective heat transport of a flowing fluid in a laboratory on a reduced scale, the knowledge gained can only be applied to the real scale if the Prandtl number is identical. This ensures that transport of momentum and energy take place to the same extent. In this case one can therefore assume similar conditions for heat transport.

One can also imagine a heated pipe that transfers heat to a fluid flowing. In this context, the Prandtl number describes how well heat is conducted through the fluid at the pipe wall and transported away by the flow. This is decisive for the entire convective heat transfer. Therefore, the Prandtl number (besides the Reynolds number) is of special importance for the calculation of the Nusselt number, which describes convective heat transfer.

For oils with increased viscosity, however, the hydrodynamic boundary layer is thicker than the thermal boundary layer. The relatively low thermal conductivity results in heat not penetrating the flow as strongly. At the same time, the high viscosity of the oil influences the flow over a wide range, i.e. a relatively large hydrodynamic boundary layer is formed. In these cases the Prandtl numbers are significantly higher than 1, e.g. glycerine, which is highly viscous at room temperature, has a Prandtl number of over 11,000. However, the Prandtl number decreases with increasing temperature due to the associated decrease in viscosity.

In practice, one often has to deal with pipe flows that are used for cooling or heating. The aim is to transfer as much heat as possible from the wall to the fluid (or vice versa). In this context the question arises whether large or small Prandtl numbers are advantageous.

Let us consider a flow in a pipe that is heated from outside. According to Fourier’s law of thermal conduction, a large heat flux between wall and fluid is obtained when the temperature gradient at the wall is very high.

The temperature gradient on the wall is therefore always the decisive factor for the convective heat transfer. However, it is also influenced by the flow velocity. For Newtonian fluids a parabolic velocity profile is developed inside the pipe (see Hagen-Poiseuille equation). The higher the mean flow velocity, the faster the heat that has penetrated the fluid is transported away. The heat accumulates less at the wall, so to speak, which in turn leads to a greater temperature gradient. High flow velocities therefore also favor convective heat transfer. Since the flow velocity can be expressed by the Reynolds number, the following statement is valid:

Thus, the product of Prandtl number and Reynolds number is a measure of the magnitude of convective heat transfer. Therefore a new dimensionless quantity can be defined, the so-called Péclet-number Pe:

In this formula, L denotes the characteristic length of the system, e.g. the diameter of a pipe or length of a plate. The Péclet number is a dimensionless similarity parameter which describes the ratio between momentum flux and heat diffusion. As already explained, the Péclet number has a significant influence on convective heat transfer in pipe flows (see article Calculation of Nusselt numbers).

In the case of liquid water, the Prandtl number at a pressure of 1 bar ranges from 13.44 (at 0 °C) to 1.75 (at 100 °C). With the formula given below, the Prandtl number can be determined in the temperature range between 0 and 90 °C with a maximum deviation of 1 % from the literature value. The temperature is to be used in the unit “degrees Celsius”.