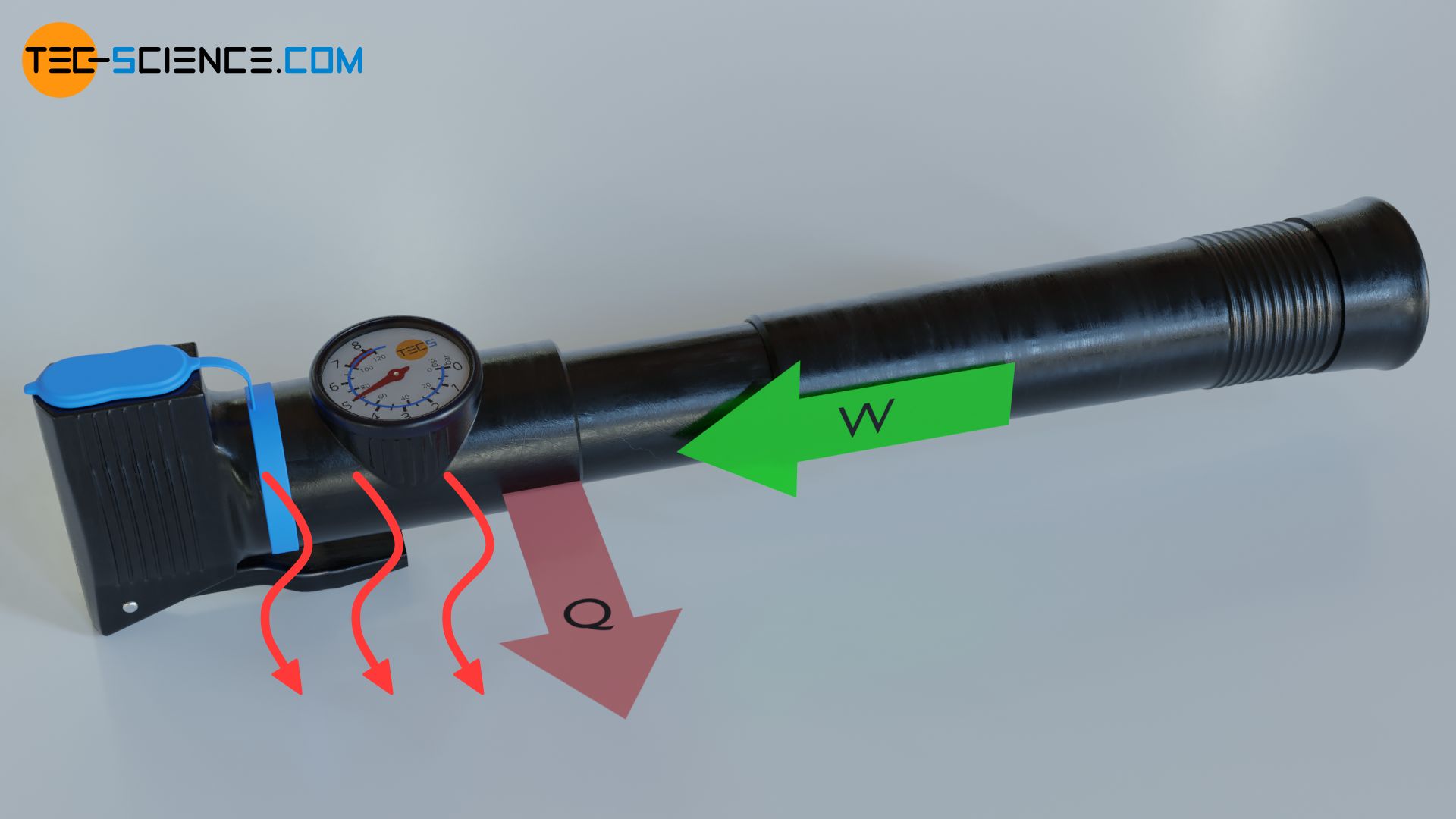 Work and heat are process quantities that describe the process of a supply of energy (“energy in transit”)! Learn more about it in this article.

Work and heat transferred to a substance

Energy can be transferred to a substance in various forms, for example as heat. Imagine a gas confined to a cylinder and heated by a Bunsen burner. Energy as heat is thereby transferred from the surroundings to the gas (the gas temperature increases).

However, energy can be transferred to a substance not only by such a thermal process, but also by a mechanical process. This is especially the case with compressible substances such as gases, when they are compressed under force and thus involving a high amount of work (“work = force x displacement”). Imagine a gas confined in cylinder, which is closed by a piston. The gas is compressed by pushing the piston into the cylinder. The work done by the piston is transferred to the gas (the gas pressure increases).

Work and heat transferred by a substance

Not only can energy be transferred to a substance but also by a substance. For example, the above mentioned gas heated by a burner flame can also transfer energy as heat to another object. For this purpose the gas is brought into contact with the other object via the cylinder wall. In this way, the hot gas inside the cylinder heats the substance outside the cylinder (for example the ambient air). The gas transfers heat to the surrounding air. Energy as heat is released by the gas (the gas temperature decreases).

However, a substance can not only transfer energy through such a thermal process, but also by a mechanical process. Imagine the above example of compressed gas inside the cylinder under high pressure. If the piston is placed vertically and an object is put on it, the gas lifts the object when the piston is pushed out. In this way work is done on the piston by the gas (the gas pressure decreases).

To demonstrate this, we consider a gas confined in a cylinder which is closed by a piston. The gas is heated with a Bunsen burner. The transfer of heat increases the temperature of the gas. This in turn leads to an increase in gas pressure. The gas under high pressure pushes the piston out of the cylinder and lifts an object. Obviously work is done on the piston and on the object by the gas while the object is lifted. During the heating and lifting, heat is converted into work.

Devices working according to such a principle, which (partially) convert heat into work, are also called heat engines. Internal combustion engines in cars or jet engines are typical examples of heat engines.

Substances (especially gases) can also convert work into heat. If, for example, a gas is compressed, the (mechanical) energy transferred to the gas will cause an increase in the kinetic energy of the gas molecules and thus an increase in temperature. In everyday life, this phenomenon can be seen, for example, when inflating a bicycle tire with an air pump. Besides the increase in pressure, the air inside the pump heats up very strongly due to the permanent compression.

If the hot gas now comes into contact with the housing, the housing is heated. You can feel this clearly with your hand. Energy as heat is thus transferred from the gas to the housing and to the surroundings. Devices working according to this principle, which convert work into heat, are also called heat pumps. Heat pumps can be found, for example, in heating systems, but also in refrigerators (in these cases heat pumps are called chillers).

On the one hand, energy as heat or as work can be transferred from the surroundings to a substance and on the other hand, energy can later be transferred by the very same substance to the surroundings. This raises the question where and in what form the energy is stored in the substance between these actions, since according to the understanding of thermodynamics obviously no heat or work can be contained in a substance? The answer to this question can be found in the article Internal Energy!