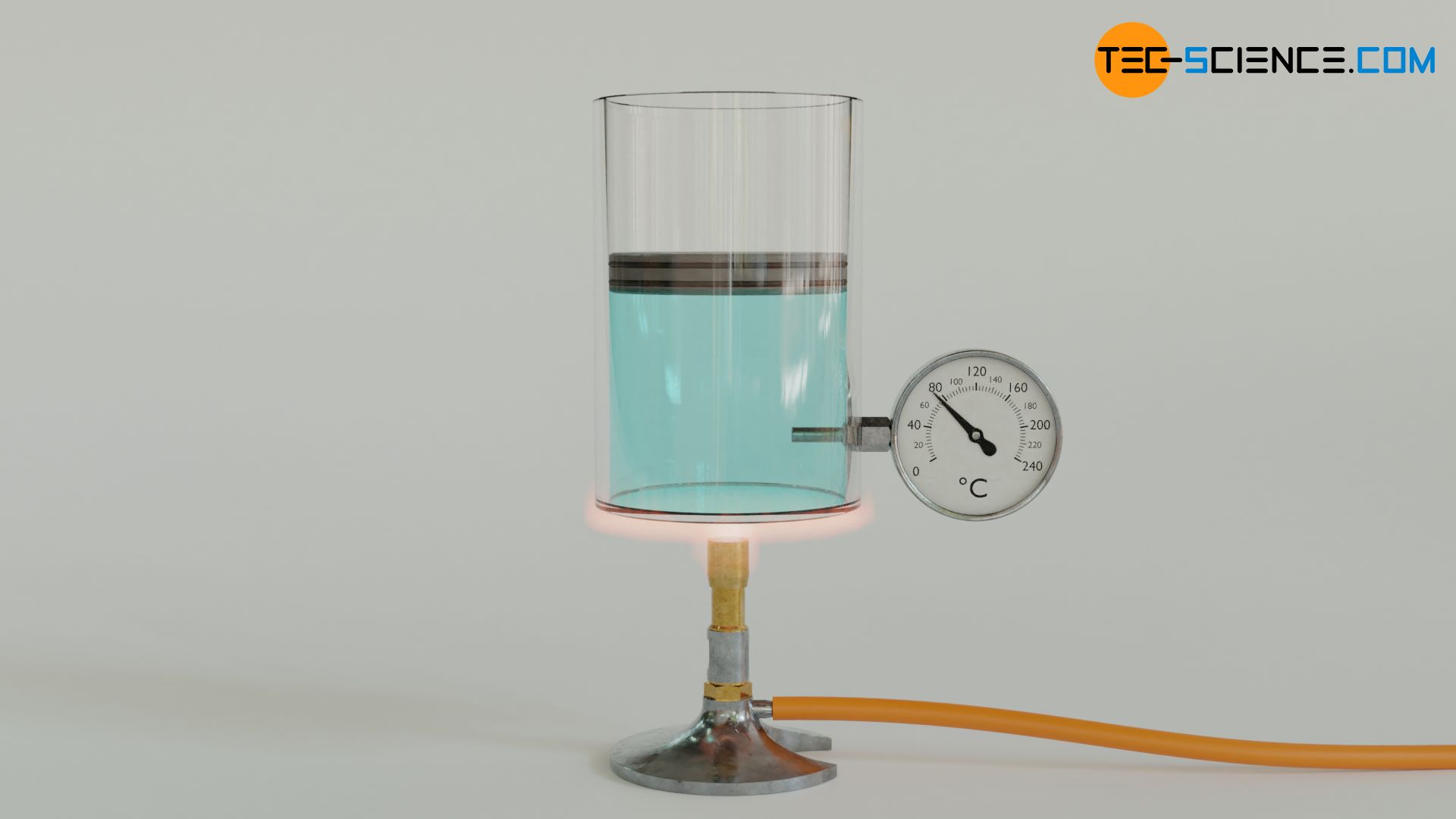 In this article, learn more about the calculation of volume, temperature, work, and heat in an isobaric process in a closed system.

A change of state of a gas in which the pressure does not change is also called an isobaric process. This means that the same pressure applies to all the states through which the gas passes between the initial and final state.

How to achieve an isobaric process

The “external” forces can therefore be used to determine the “internal” force of the gas, and with the piston area A finally the gas pressure p. In the present case, the “external” force is on the one hand the weight force FG of the piston (including any weights attached to the piston). On the other hand, the force Famb also acts on the piston, which is due to the ambient pressure! This ambient force can be calculated from the ambient pressure pamb and the piston area A (Famb=pamb⋅A). By setting up the balance of forces, the acting force of the gas Fgas can be calculated:

Thus, the gas acts with this force Fgas on the piston surface A, which leads to the following gas pressure p:

Equation (\ref{de}) shows that the gas pressure obviously depends only on quantities which do not change during the entire thermodynamic process. The gas pressure thus always remains constant for the entire change of state. Therefore, the lifting of the piston is an isobaric process.

Relationship between volume and temperature (law of Gay-Lussac)

Any two states within an isobaric process are consequently linked by the constant quotient of volume and temperature:

In this equation cv denotes the specific heat capacity and m the mass of the gas. If equation (\ref{p}) is used in equation (\ref{du}) after factoring out the temperature T1, the change in internal energy can also be expressed in terms of the volume ratio V2/V1 (=T2/T1).

Note: The negative sign results from the sign convention, since with an increase in volume (expansion: ΔV>0) the gas obviously does work on the piston and the pressure-volume work is to be counted negatively (Wv<0). Conversely, a reduction in volume (compression: ΔV<0) is to be counted positively, since work is done on the gas (Wv>0).

The pressure-volume work Wv can therefore also be determined from the difference between the final and initial temperature of the isobaric process:

Finally, the first law of thermodynamics can be used to calculate the heat energy Q absorbed or released by the gas for an isobaric process. The transferred heat is determined from the difference between the change in internal energy ΔU and the pressure-volume work Wv:

At this point, the constant quantities cv and Rs can be combined to form a new constant cp, resulting in the following relationship between the transferred heat Q and the temperature change:

The reason why these constants are combined to form a new constant becomes apparent when comparing the upper formula with the formula for the transferred heat of an isochoric process:

The transferred heat according to equation (\ref{q}) can also be expressed by the ratio of final and initial volumes for a given initial temperature T1:

Note on the specific heat capacities

Note that it is evident from equation (\ref{q}) that the isobaric heat capacity cp is always greater than the isochoric heat capacity by the value of the specific gas constant Rs. This means that more heat has to be transferred in an isobaric process than in an isochoric process if the same temperature change is to be achieved.

The reason for this is that in an isobaric process the supplied heat energy Q does not completely benefit the change in internal energy ΔU and thus the temperature increase. This is because part of the supplied heat is converted into pressure-volume work Wv. For this reason, more heat energy must be supplied so that, minus this pressure-volume work, sufficient energy is still available for the change in internal energy and thus for the temperature increase.