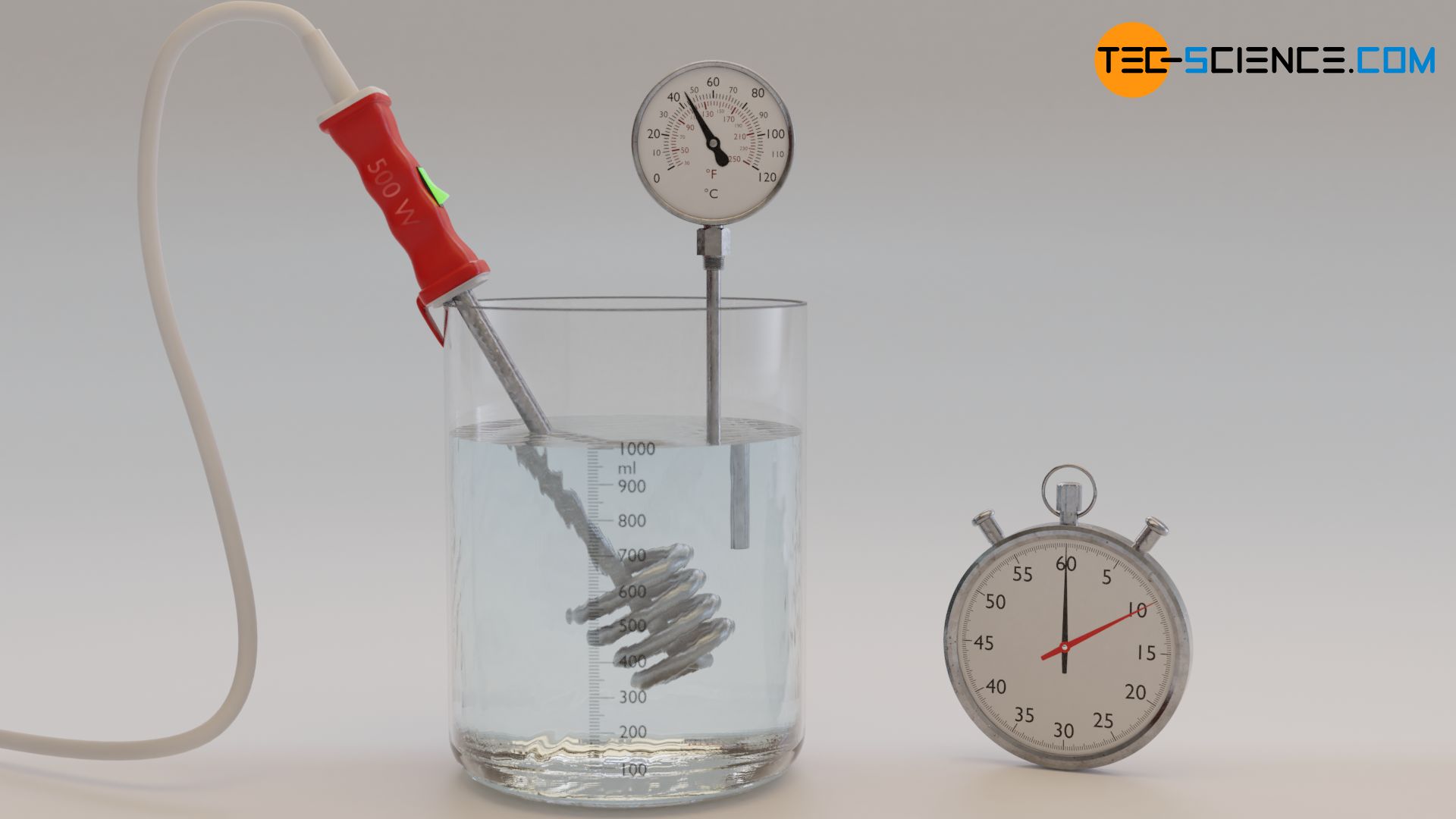 The specific heat capacity indicates how much heat must be absorbed by a substance of mass 1 kg in order to increase its temperature by 1 K (1 °C).

Such a “slow” behavior of water to react to a heat transfer is very clearly shown in the climate of some regions. In regions that are located near large amounts of water, temperature fluctuations over the course of the year are significantly smaller than in regions without large amounts of water in the vicinity. Water masses obviously change their temperature much less compared to land masses when they are heated in summer or cooled in winter (see climograph of Aberdeen and Green Bay in the figure below).

The question arises how to calculate the temperature change for a given amount of heat to be absorbed or released for the different substances. Or, to put it the other way round: what amount of heat must be transferred in order to achieve a certain change in temperature?

Another influencing factor is the mass of the substance to be heated. It can be assumed that the greater the mass to be heated, the more heat must be absorbed by the substance. This is also shown by everyday experience when heating water on a hotplate. Heating a large amount of water takes much longer than heating a smaller amount of water, i.e. for large amounts of water, more heat must be transferred to achieve the same temperature change as for a small amount.

In order to systematically investigate the above-mentioned parameters influencing the amount of heat, water is used as an example in the following. For this purpose, a certain mass of water is heated with an immersion heater and the temperature change is measured over time. The experiment is then repeated with different masses of water.

The figure below shows the evaluation of the experiment with an immersion heater of 500 W power. The values on the horizontal axis on which the time is plotted were also converted into a amount of heat according to formula (\ref{q}). In principle, there is a linear relationship between the heat transferred and the increase in temperature.

Thus, the amount of heat that must be transferred to cause a given temperature change and the mass of water to be heated are proportional to each other:

Thus, the quotient of heat Q and the product of mass m and temperature change ΔT is constant and can be defined as a proportionality constant. This proportionality constant is called specific heat capacity c and is a material property of the substance to be heated. For water, the specific heat capacity in the present experiment is determined to be 4.8 kJ/(kg⋅K) (literature value: 4.2 kJ/(kg⋅K)). To find out why the experimentally determined value is larger than the literature value and how this systematic error can be corrected, see the article Calorimeter for determining the specific heat capacities of liquids.

Thus, as a material-dependent quantity, the specific heat capacity c describes the relationship sought between the transferred heat Q and the resulting temperature change ΔT for a given mass m:

The specific heat capacity of substances can not only be understood as a mere proportionality constant, but can also be interpreted very clearly. A specific heat capacity of e.g. 4.2 kJ/(kg⋅K) (spoken: “four point two kilojoules per kilogram and kelvin”) means that for a mass of water of 1 kilogram, a quantity of heat of 4.2 kJ is required to heat the water by 1 °C (1 K).

The specific heat capacity of a substance indicates how much heat is required to change the temperature of mass 1 kilogram by 1 Kelvin (1 °C)!