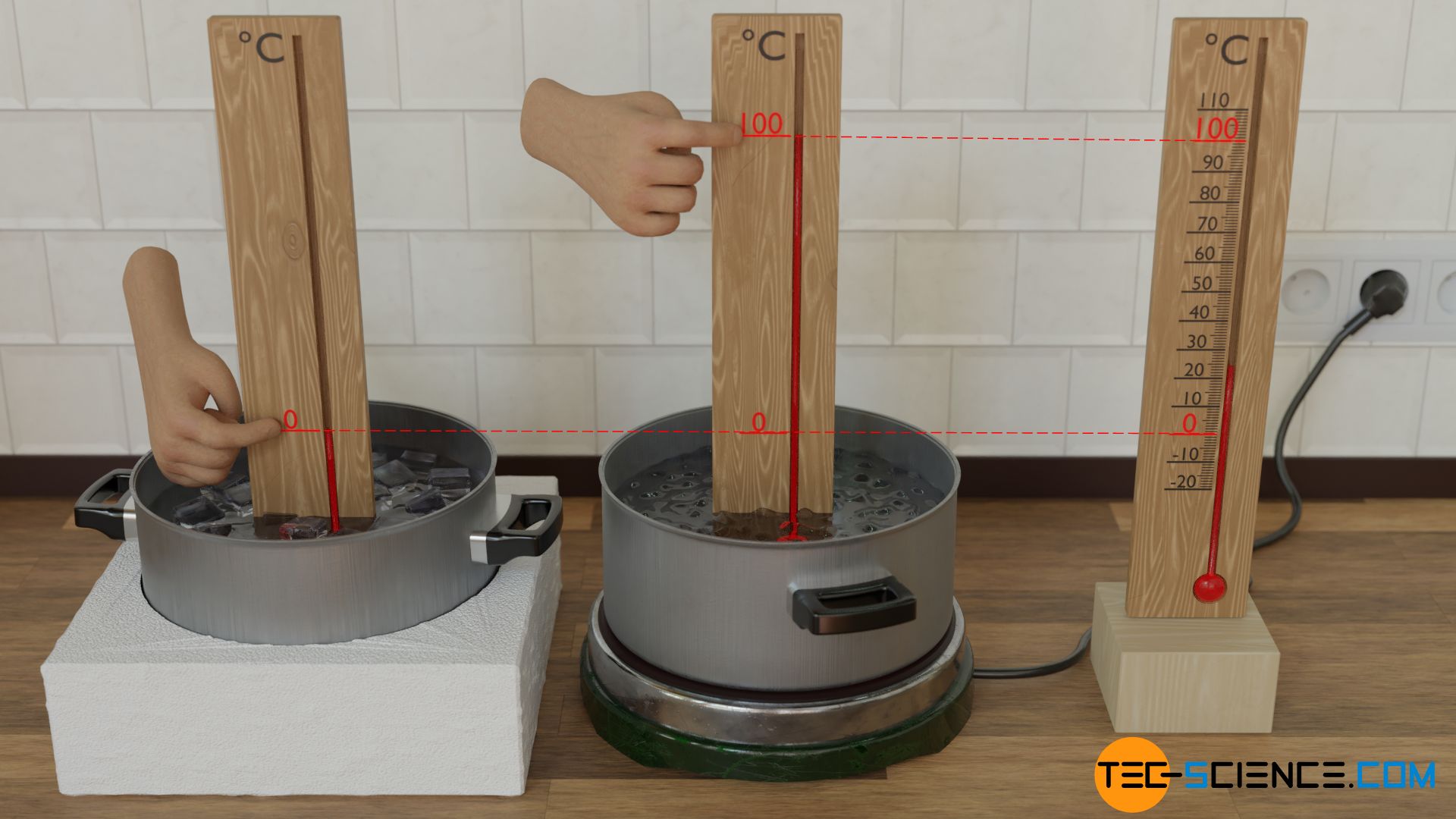 Learn more about the origin of the Celsius, Fahrenheit, and Kelvin temperature scales in this article.

In everyday life, temperature is often understood as a quantity that expresses the property of a substance to be “hot” or “cold”. In fact, however, such a perception of hot or cold depends on various factors. Among other things, it depends on the thermal conductivity of the substance. For example, metal feels much cooler than wood at low temperatures due to its higher thermal conductivity, although both have the same temperature.

On the other hand, the human perception of temperature (human thermal response) depends on the “prehistory” of our skin with which we touch objects. For example, if we hold a hand in ice water and then put it in a pot of warm water, it feels much hotter than if we hold an uncooled hand in the pot with warm water.

Temperature is a measure of the kinetic energy of a particle in a substance!

This kinetic energy is also noticeable in the thermal expansion of substances. At high temperatures, the particles are very strongly in motion and thus occupy a larger space. In so-called liquid-in-glass-thermometers exactly this principle of thermal expansion is used to determine the temperature. A thermometric liquid* in glass tube (also called capillary tube) expands when heated and contracts when cooled. A calibrated scale can then be used to read off the respective temperature that led to the corresponding thermal expansion.

Depending on which reference points are used to determine the scale and thus to measure the temperature, there are three main temperature scales:

The different temperature scales are described in more detail in the following sections.

*) A liquid is considered thermometric if its volume changes uniformly with temperature and is therefore suitable for use in liquid-in-glass-thermometers. In the past, highly toxic mercury was used for this purpose; today, a coloured alcohol mixture is used (e.g. ethanol).

In many countries it is common to measure the temperature of substances by means of the so-called Celsius scale. When the Swedish astronomer Anders Celsius defined the Celsius scale at the time, two reference points were used. One is the melting point of water and the other is its boiling point of water (both at an ambient pressure of 1 bar).

The German physicist Daniel Fahrenheit wanted to avoid negative temperature values on his temperature scale for everyday life. In the 17th century (well before Celsius), he therefore thought about the lowest possible temperature, which he could produce in his laboratory without technical aids.

He experimented with a cooling bath of water, ice, and ammonium chloride and was able to produce a minimum temperature of -17.8 °C. He used this temperature to determine the zero point of his Fahrenheit scale (0 °F). As a further reference point, Fahrenheit used the human body temperature and assigned the value 100 °F to it (37.8 °C) . The temperature values obtained on the Fahrenheit scale are denoted by the unit degrees Fahrenheit (°F).

The decisive handicap of the Fahrenheit scale was that the reference point defined by body temperature is not exactly reproducible. Everyone has a different body temperature depending on their daily form and physical activity.

Conversely, the following formula applies to the conversion of a given temperature in the unit degress Fahrenheit to degress Celsius:

The figure below shows the comparison of the two temperature scales.

The Celsius scale and also the Fahrenheit scale are not very scientific due to the arbitrary determination of the reference points. Rather, a thermodynamical temperature scale should take into account the fact that temperature is a measure of particle motion. The temperature at which the particles no longer have any kinetic energy (i.e. are completely at rest) should therefore be used as the (absolute) zero point for a physically meaningful temperature scale.

Such an absolute “zero point” is used for the so-called Kelvin scale. The temperature at which the particles of a substance no longer have any motion is defined as the zero point. This temperature therefore represents the lowest possible temperature and is therefore also referred to as absolute zero.

Absolute zero denotes the temperature at which the particles of a substance no longer have any kinetic energy, i.e. are completely at rest! Absolute zero is at -273.15 °C on the Celsius scale and -459.67 °F on the Fahrenheit scale!

The figure below shows the comparison of the different temperature scales.

In everyday life it is not really possible whithout further ado to cool substances so strongly that the temperature at absolute zero (on the Fahrenheit scale or the Celsius scale) could be determined directly. In addition, the atomic particles are not directly visible in order to be able to judge whether the point where the particles are motionless has actually been reached. In this section, therefore, an experiment for determining absolute zero is to be shown, which then leads to the implementation of the Kelvin scale.

In order to determine the temperature at absolute zero, at which the particles are completely motionless, the following considerations are made:

This means, that absolute zero can be determined by examining the laws between temperature and volume for an (approximately) ideal gas in more detail and then determining the temperature at which the volume should theoretically become infinitely small.

Helium comes closest to an ideal gas, which is why it makes sense to study the relationship between temperature and volume of helium more closely. The examination of this temperature-volume relationship can be done with a glass tube containing helium (or in the simplest case air).

The glass tube is sealed with a droplet of mercury to prevent the gas from escaping while at the same time allowing it to expand and contract. The gas volume can therefore always adapt to the given temperature at a constant ambient pressure. The different temperatures can be adjusted for example with a heat gun. The volume which the gas occupies at a certain temperature can be read off directly from the scale on the glass tube.

In this experiment, it makes sense to first heat the gas to the maximum and to record the temperatures and volumina during cooling, as the cooling is much more uniform than the punctual heating with the heat gun. This ensures that the entire gas has a uniform temperature and does not only become hot here and there.

If the experiment is now carried out for different temperatures and the resulting temperature-volume relationship is graphically represented, a linear connection becomes apparent. This means that the volume increases continuously with an increase in temperature and decreases uniformly with a decrease in temperature. With the help of this regularity a prediction can now be made which lowest possible temperature can be expected at an infinitely small volume (which means at absolute zero).

Note that the same temperature at absolute zero will also be obtained again and again when other types of gas are used. For this reason, this temperature value is called absolute zero, which applies to all substances in the world.