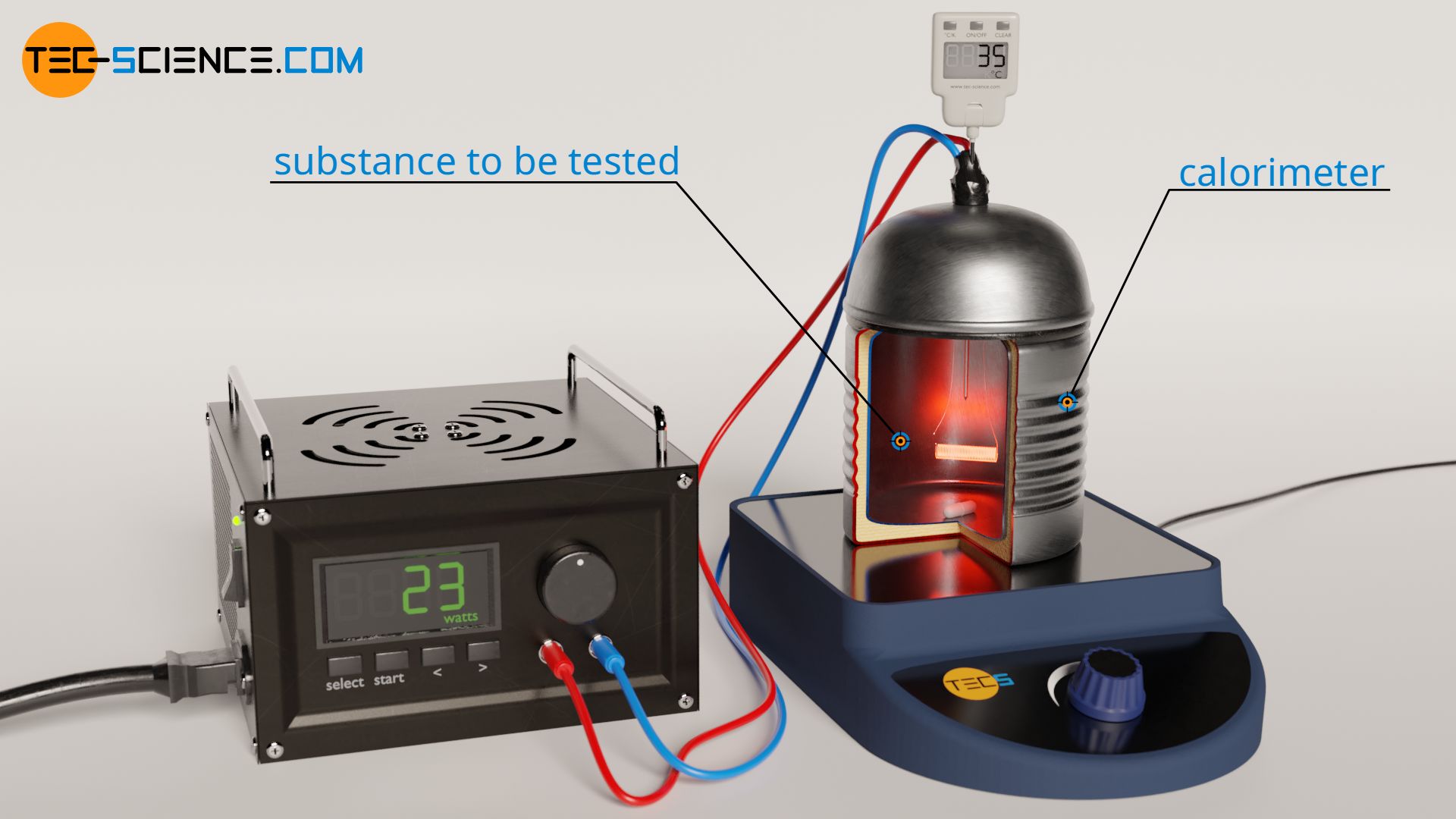 Calorimetry deals with the measurement of heat energy.These measurements are based on temperature changes, which are used to determine the amount of heat involved.

With such a test setup it should be ensured that the liquid is heated evenly. Otherwise, the thermometer would only measure a punctual temperature which is not representative for the entire liquid. Without uniform heating, the temperature of the liquid near the heat source would be significantly higher than further away from it. Thus, during heating, the liquid should always be well mixed. This can be achieved by using a magnetic stirrer. In this case, the calorimeter stands on a plate that generates a rotating magnetic field. This rotating field causes a stir bar to rotate and thus mixes the liquid.

In principle, heat transfer to the surroundings can be prevented by very good thermal insulation (at least for the duration of the experiment), but heating of the inside of the calorimeter cannot be prevented. The heat emitted by the heating coil will therefore always be transferred to the calorimeter to a certain extent and will not be completely absorbed by the water! Therefore, heat loss cannot be prevented. It is therefore important to take such heat losses into account. This is done by explicitly taking into account the absorption of heat by the calorimeter in the energy balance.

The heat capacity C of the calorimeter can be determined in advance by mixing experiments (see next section). In this way, the specific heat capacity cs of the liquid can finally be determined relatively accurately on the basis of the emitted heat Qt and the temperature change ΔT:

Definition of the “water value”

Determination of the heat capacity of the calorimeter

For this purpose, the energy flow of the mixing process is considered in more detail. The entire system is ultimately heated by the warm water of mass m2. The heat Q2 emitted is divided into an amount of heat Q1 which heats the cold water of mass m1, and an amount of heat Qc which heats the calorimeter. The heat energy Q2 emitted by the water water of mass m2 is determined by the temperature difference between the initial temperature T2 and the final mixing temperature Tm. The absorbed heat energy Q1 of the water mass m1 is calculated in an analogous way. Likewise this applies to the absorbed heat Qc of the calorimeter, where C is the unknown heat capacity of the calorimeter.

Note: According to the historical definition of the “water value” W – i.e. as equivalent water mass having the same heat capacity as the calorimeter – that quantity C would still have to be divided by the specific heat capacity of water cw:

Influencing factors on the heat capacity of the calorimeter

Note that the heat capacity C of the calorimeter is not a constant parameter! It depends on the following influencing factors:

Due to the influencing factors mentioned above, the heat capacity of the calorimeter should therefore be determined in advance under conditions similar to those that will later be present during the actual measurement. This means in particular:

A special type of calorimeter is the so-called bomb calorimeter. A bomb calorimeter is used, for example, to determine the energy content of food. To do this, the sample to be analyzed is first placed in a vessel known as a bomb. The bomb is then filled with oxygen and placed under high pressure. This bomb is now placed in a water bath inside the calorimeter. Electrical energy is used to ignite the sample, similar to the ignition of a bomb, which gives this calorimeter its name. The temperature increase of the water bath can then be used to calculate the heat released by the combustion of the sample (= energy content of the food).