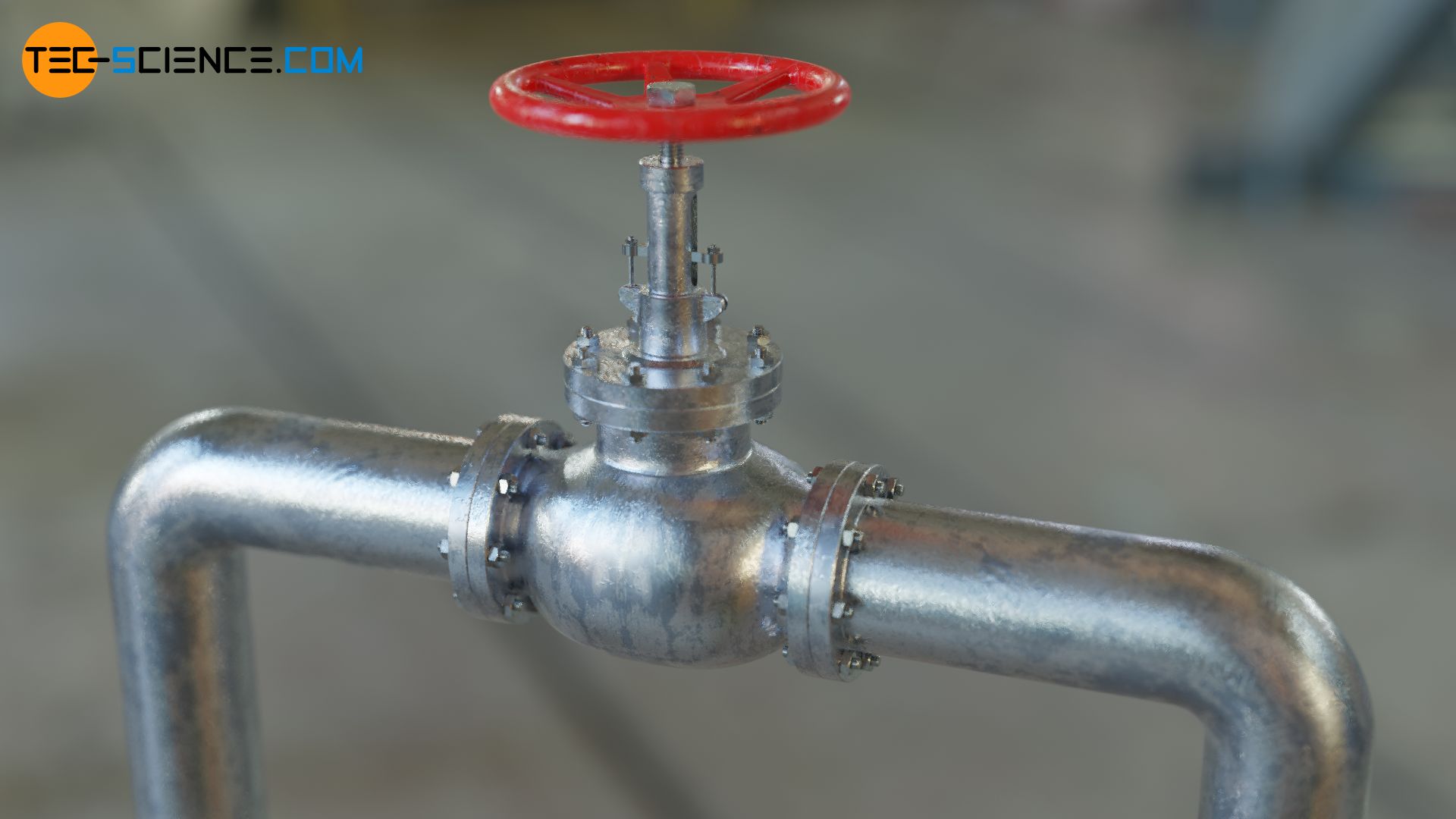 When fluids flow through pipes, energy losses inevitably occur. On the one hand, this is due to friction that occurs between the pipe wall and the fluid (wall friction). On the other hand, frictional effects also occur within the fluid due to the viscosity of the fluid (internal friction). The faster the fluid flows, the greater the internal friction effect (see also the article on Poiseuille flow).

Further flow losses are caused by turbulences in the fluid, especially at fittings, which serve as obstacles for the flow. Although these turbulences contain kinetic energies, they do not transport them through the pipeline from a macroscopic point of view, but remain in place, so to speak.

In the article Venturi effect it was already shown in detail that pressure can also be understood as volume-specific energy. In this context, pressure indicates how much energy per unit volume is contained in a fluid. Thus, if pressure means energy, then a loss of energy inevitably means a loss of pressure. The friction and flow effects described above are thus accompanied by a corresponding pressure loss (pressure drop).

The (static) pressure loss in pipelines is associated with the loss of mechanical energy that inevitably occurs when a fluid flows through a pipe system.

In the following, we only consider incompressible flows such as liquids or slow flowing gases.

Regardless of whether the flow is laminar or turbulent, the pressure loss or pressure drop through a pipeline is described by a dimensionless similarity parameter. This so-called Darcy friction factor f basically describes the relationship between pressure loss Δpl (energy loss) and the kinetic energy contained in the flow in the form of the dynamic pressure Δpdyn. In addition, the ratio of inner pipe diameter d and pipe length L must be taken into account.

In this equation d denotes the inside diameter of the pipe and L the length of the straight pipe section along which the pressure drop is Δpl. The Darcy friction factor is also referred to as resistance coefficient or just friction factor.

The flow velocity refers to the mean flow velocity of the fluid in the pipe. Note that in both turbulent and laminar flow there is no uniform velocity distribution across the pipe cross section, but a typical velocity profile (see Poiseuille flow).

The Darcy friction factor (resistance coefficient) is a dimensionless similarity parameter to describe the pressure loss in straight pipe sections!

The friction factor can also be calculated mathematically based on the geometry of the pipe, as will be shown later.

Note that this formula only applies to straight pipe sections. In pipe elbows, further losses usually occur due to the redirection of the flow, which leads to pressure losses. These component-dependent pressure losses (individual resistances) are taken into account separately by a minor loss coefficient ζ. More about this later.

If equation (\ref{vol}) is used in equation (\ref{def}), then the following formula for the pressure loss at a given volume flow rate is finally obtained:

The diameter obviously influences the pressure loss to the fifth power and thus has a decisive influence. In general, the larger the diameter, the lower the pressure loss! Note that the friction factor f is, however, dependent on the flow velocity. The flow velocity in turn depends on the volumetric flow rate and thus on the pipe diameter! So, these variables generally influence each other.

The pressure loss resulting from the viscosity due to the internal friction of the fluid (“toughness”) has already been derived in detail for a laminar flow in the article on the Hagen-Poiseuille equation:

In this equation Δpl,lam denotes the pressure drop along a pipe section with the inside diameter d and the length L when a fluid with the dynamic viscosity η flows laminar through the pipe with the mean velocity v or the volume flow rate V*.

The Darcy friction factor flam for a laminar pipe flow can be determined by using formula (\ref{lam}) in equation (\ref{lambda}):

It has already been said that friction is not only present within the fluid itself, but that friction effects also occur in general between the fluid and the pipe wall. However, since the fluid adheres to the wall anyway (no-slip condition) and the laminar layers cover the roughness of the wall, this has no additional influence on the pressure loss. The total pressure loss is therefore given only by equation (\ref{a}) for a laminar flow. The situation is different for turbulent flows, which will be discussed in more detail in the next section.

In turbulent flows, the roughness of the pipe wall has a great influence on the friction factor. For this purpose we take a closer look at the situation of the fluid on the rough pipe wall. First of all, even in turbulent flows, the fluid particles located directly on the wall adhere to it due to the no-slip condition. However, no turbulence can form in the immediate vicinity of the wall, as cross-flows are prevented by the wall (the fluid cannot flow through the wall). For this reason, a so-called laminar sublayer, also referred to as viscous sublayer, forms directly at the wall.

A pipe is considered hydraulically smooth when the viscous sublayer completely covers the surface roughness. The pressure loss is lowest in this case!

However, this roughness parameter as an absolute measure of the roughness of the pipe wall is not suitable for characterizing the influence on the turbulent flow. The roughness must always be considered in relation to the entire flow cross-section, i.e. the inner diameter of the pipe. The ratio of absolute roughness k and pipe diameter d is also called relative roughness ε:

The relative roughness indicates the percentage of the total pipe diameter taken up by the roughness.

For hydraulically smooth pipes, the viscous sublayer covers the roughness of the wall. In this case, the relative roughness ε in the Colebrook-White equation must be set to zero, regardless of the value actually obtained:

If the surface roughness of the pipe wall protrude completely from the viscous sublayer, the friction factor is determined almost exclusively by the wall roughness and is independent of the Reynolds number. The scientist Nikuradze derived the following explicit equation for such hydraulically rough pipes to determine the pipe friction coefficient:

Any pressure loss in a pipeline must be compensated by the power of an appropriate pump. The power loss Pl due to the pressure loss Δpl depends on the volume flow rate V*:

At this point it must again be noted that the friction factor f is dependent on the Reynolds number and thus on the flow velocity. The flow velocity, in turn, depends on the volume flow rate and the pipe diameter!

Only for laminar flows, there is an explicit relationship between the Reynolds number and the friction factor according to equation (\ref{a}). In this case, the pressure loss for laminar flows can be directly put into the formula for the power loss (\ref{v}) according to equation (\ref{lam2}). In the case of laminar pipe flows, the following relationship then applies:

Conversely, a so-called equivalent pipe length Le can be given for individual components. These components can then be imagined as additional pipe sections. In the equation given below, the Darcy friction factor f corresponds to the friction factor of the actual pipes.

For only one pipeline of total length L with constant inside diameter d and thus constant mean flow velocity v the following formula applies: