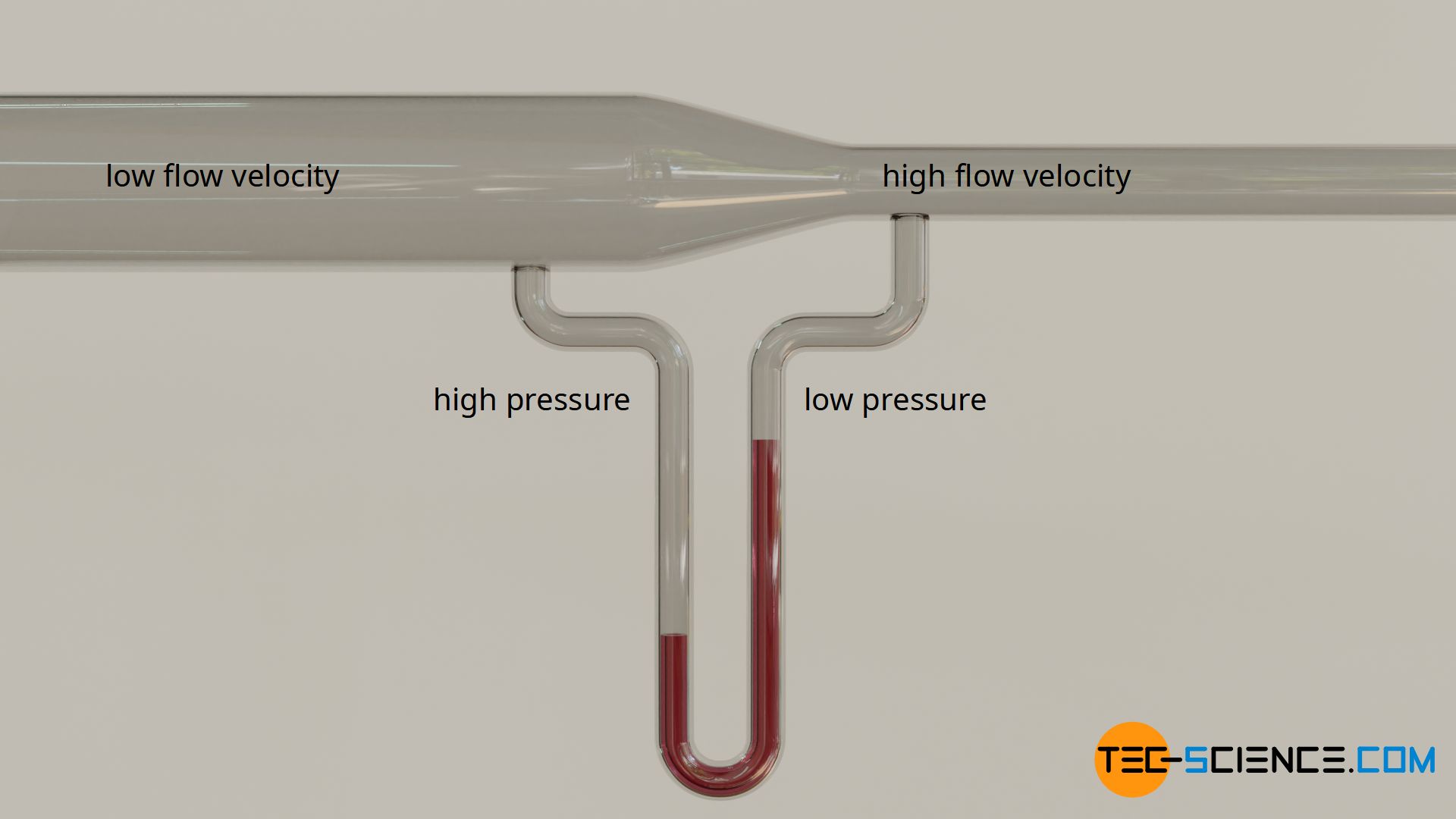 The Venturi effect describes the decrease of (static) pressure in flowing fluids with increasing flow velocity due to a constricted section.

Pressure is usually measured in the unit N/m² (force per unit area). If this quotient is extended by the unit meter (m), then the pressure can also be interpreted formally as energy per unit volume:

How can pressure be depicted as volume-specific energy? For this purpose we consider a water tank which we fill with a pump from the bottom. Filling the tank with water requires energy, because the water in the tank has to be pressed upwards against gravity. The work necessary to lift the water is done by the pump.

We imagine a manually operated piston pump. The pump presses the water through the pipe with a piston. We can determine the force required for a pump stroke from the stroke length of the piston Δs and from the pressure p acting on the piston surface area A. We assume that the tank is sufficiently large so that the water level practically does not change during a stroke. In this case we can assume a constant force during the stroke. The work done per stroke (ΔW) can be calculated using the following formula:

The product of piston area and stroke length corresponds to the pushed in volume ΔV (displaced volume). The work ΔW performed by the pump was converted into potential energy of the fluid. Let us now reverse this process in our thoughts. In this case, the water pressure p pushes the piston back by the distance Δs and performs work ΔW on the piston. The fluid volume ΔV with the pressure p was obviously able to do the work ΔW. If you rearrange equation (\ref{w}), then the pressure obviously also makes a statement how much energy per unit volume is present in a fluid and can be converted into mechanical work accordingly:

Pressure can be interpreted as volume-specific energy (energy per unit volume), which indicates how much potential energy is contained in a volume of a fluid and can be converted into mechanical work!

The energetic interpretation of the pressure has far-reaching consequences. Let us consider a pipe through which water flows without friction. At a reducer the pipe is brought to a smaller diameter. The same mass that flows into the reducer must also flow out on the reduced side, because mass cannot accumulate or be destroyed in the reducer (continuity equation). However, the same mass can only be transported through a reduced pipe section if the flow velocity increases accordingly. This is exactly what happens inside the reducer, i.e. the fluid is inevitably accelerated.

Acceleration means an increase in the kinetic energy of the fludis. However, energy can not increase out of nothing (inside the reducer there is no pump installed, which could have delivered that energy). Knowing about energetic interpretation of pressure, only one answer remains: increase of kinetic energy can only come from pressure. However, this also means that the pressure in the constricted section with the higher kinetic energy must be lower. That this is indeed the case can be confirmed by pressure gauges attached to the pipes.

The Venturi Effect refers to the decrease of static pressure in flowing fluids with increasing flow velocity due to energy conservation!

Demonstration of the Venturi effect

The Venturi effect can be demonstrated impressively on a vertical tube mounted on a plate with a hole. Another plate with additional weight is held against this plate from below. When air is blown through the pipe, the lower plate is not pressed down but upwards! The reason for this is the Venturi effect. Because of the small gap between the two plates, the air flows very fast. The static pressure between the plates decreases. So on the top side of the lower plate there is a lower pressure than on the bottom side. The plate is therefore pressed upwards by the greater ambient pressure at the bottom.

The pressure drop with increasing flow velocity can be clearly shown for gas flows. For this purpose, the pipe sections of different sizes are connected to a liquid-filled U-pipe. The higher pressure in the pipe section with the slow flowing gas pushes the liquid in the direction of the lower pressure pipe section with the faster flowing gas. Such an arrangement for generating a pressure difference, in particular the generation of a negative pressure, is also called a venturi tube or venturi nozzle. This principle is used to operate pneumatic suction cups, for example.

By the way: If the flow velocity in a tapering pipe section reaches the speed of sound, the flow velocity in the supersonic range can only be further increased if the cross-section increases again. Such a pipe shape is also referred to as a de Laval nozzle. The typical constriction and subsequent enlargement of the cross section to generate supersonic flows can be seen in rocket engines, for example. The outer visible part of the rocket engine is the supersonic part of the de Laval nozzle.

Where does the apparent contradiction come from?

So where does the apparent contradiction come from, that the pressure decreases with increasing speeds. In this context one often imagines a jet of water directed at one. Experience shows that the higher the speed of the water jet, the greater the force and thus the pressure we feel. There is nothing wrong about this observation, but the conclusion is!

The same argument applies if, for example, we hold a plate in a water current and then claim that the pressure increases with increasing flow velocity. The pressure that we feel is not the pressure in the flowing state, but the pressure that is created when the flow slows down the plate. If you want to measure the static pressure in a flowing fluid, the flow itself must not be slowed down. This is exactly what the Venturi tube does by measuring the pressure sideways as it flows past. This principle is also used to determine the dynamic pressure using a Prandtl tube.