Home Thermodynamics Heat Why does the temperature remain constant during a change of state (phase... 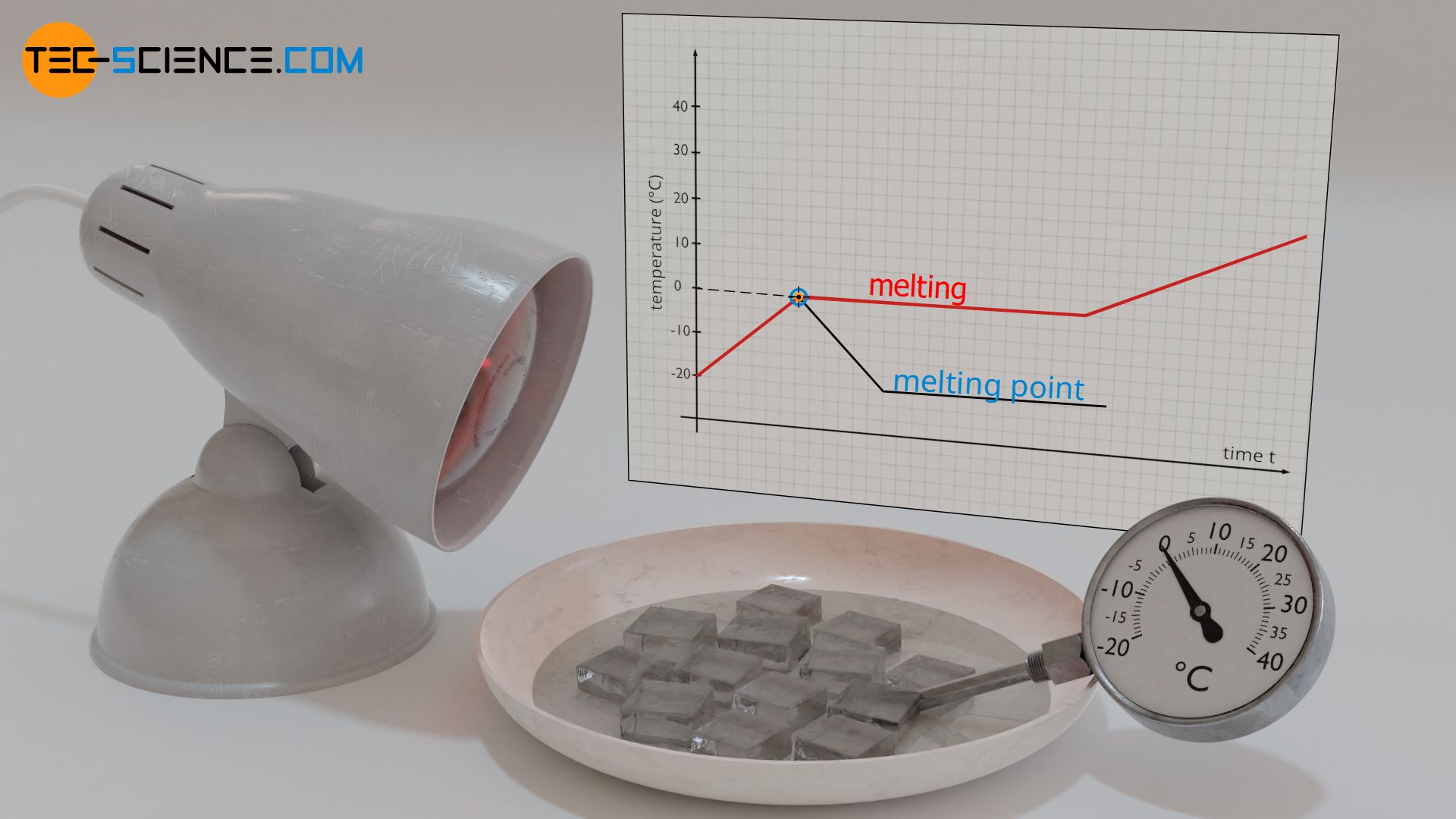 During a change of the state of matter, the supplied energy is not used to increase the kinetic energy of the molecules, but to change the binding energies. Therefore, the temperature remains constant.

Constant temperature during vaporization and melting

Not only when water melts or vaporizes do the temperatures remain constant, but also in the reverse cases,when gaseous water condenses or liquid water solidifies. This phenomenon of constant temperature can generally be observed when the state of matter of a substance changes (also called phase transition or phase change). This is not only true for water, but can be observed for all pure substances.

The question arises as to why the temperature does not change despite the transfer of heat energy during a phase change. And is this also true for mixtures of substances?

Cause of temperature increase when heat is transferred

Since, on the other hand, the temperature remains constant in the case of a phase transition, the energy supplied can obviously no longer benefit the kinetic energy of the molecules. Using the example of the vaporization of a liquid, the atomic processes that take place are explained in more detail below.

If the liquid is now heated, the binding forces are loosened up by the stronger particle movements. In a figurative sense, this would correspond to an overstretching of the rubber bands due to the increasing movement (increasing distance). At some point, the motion of the molecules will be so strong that rubber bands will wear out and thus lose elasticity. In this state, the boiling point of the liquid is reached and the molecules are hardly elastically connected with each other.

At this boiling point, the kinetic energies of the individual molecules are greater than the binding energies between the molecules. The motion of the molecules is, so to speak, stronger than the bond between the molecules. In the figurative sense, this would correspond to the point where the molecules have enough energy to break the rubber bands that normally hold them together. Those molecules that have broken free of the bonds can now move freely and are no longer bound to the liquid – they have become gaseous. Note that in general, intermolecular binding forces also act in the gaseous state, but these are significantly lower compared to the binding forces in the liquid or solid state!

The heat energy supplied during vaporization therefore does not benefit the increase in kinetic energy and thus the increase in temperature, because the heat energy is used to break the molecules loose from the intermolecular binding forces (change in internal energy). For this reason, the temperature remains constant during vaporization until the change of state is complete. Only then can the kinetic energy and therefore the temperature be further increased.

During a phase transition the supplied energy is not used to increase the kinetic energy of the molecules, but to change the binding energies (increase in internal energy)!

When a gaseous substance condenses, it emits the previously absorbed heat of vaporization (in this case called heat of condensation). This process can also be illustrated with rubber bands. While the molecules in the gaseous phase can move relatively free, the molecules in the liquid state are held together by stronger intermolecular forces. The process of condensation thus corresponds to the “capture” of the molecules with the help of rubber bands. Thereby, the flying molecules hit the network of already captured molecules of the liquid phase with full force.

Atomic processes during melting and solidification

Therefore, energy is also required to break the molecules free from the strong binding forces during melting. This is provided by the heat input during melting. This heat input does not lead to a further increase in temperature until all intermolecular bonds have been broken and the substance has melted. Only then can the supplied heat be used to increase the kinetic energy – the temperature of the liquid rises.

The amount of heat required to completely melt a substance is called the heat of fusion. More information specifically on this can be found in the article Specific heat of fusion and heat of solidification (latent heat).

Changes in the state of matter at non-constant pressure

In the article Why does water boil faster at high altitudes? it has already been explained in detail that the boiling temperature changes with the ambient pressure. Such pressure dependence occurs not only in vaporization or condensation, but generally in any kind of phase transition. Therefore, melting temperatures or solidification temperatures are also pressure-dependent. Thus, the temperature remains constant during a change of state only if the pressure remains constant at the same time.

If, for example, water were to be brought to the boil in a so-called pressure cooker, the temperature would no longer remain constant during vaporization. A pressure cooker seals the pot of water gas-tight. Compared to liquid water, however, gaseous water occupies a much larger space. In a pressure cooker, however, gaseous water cannot expand. The pressure therefore increases continuously as the water vaporizes (a relief valve usually limits the pressure to a maximum of 2 bar). With the continuous increase in pressure, the boiling temperature also rises permanently during vaporization. Consequently, the temperature does not remain constant in this case.

In the case of phase transitions of pure substances, the temperature remains constant only if the pressure is kept constant at the same time (isobaric process)!

Phase of transition of mixtures of substances

In the case of mixtures of substances, the temperature generally no longer remains constant during phase transitions, but the temperature change merely slows down in the process!