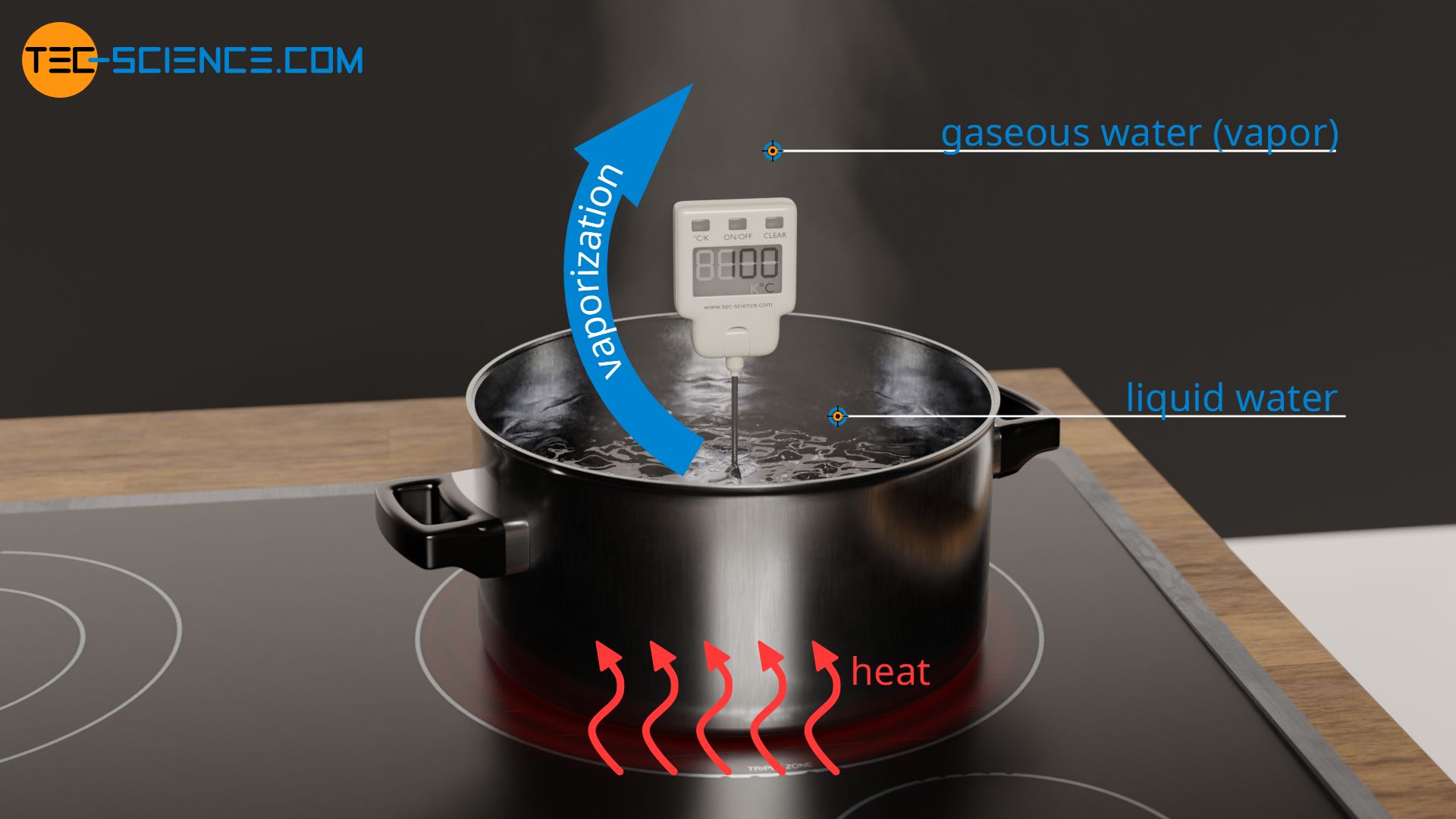 If a liquid is heated more and more, then at some point the boiling point is reached. At this point, the state of matter changes and the liquid finally begins to vaporize (also referred to as boiling). During vaporization, no further increase in temperature is observed for pure substances, despite the continued supply of heat energy. During vaporization, the energy obviously no longer benefits the increase of the kinetic energy of the molecules, which would otherwise mean an increase in temperature (see also article Temperature and particle motion).

During vaporization, energy must be added to break the intermolecular bonds. In the case of pure substances, the temperature of the liquid remains constant until the process of vaporization is completed!

More detailed information on this can also be found in the article Why does the temperature remain constant during a change of state (phase transition)?

The fact that heat has to be supplied permanently to drive the breaking of intermolecular bonds is evident, for example, in the boiling of water. If water is boiled in a pot, the water only vaporizes as long as the hotplate remains switched on. However, if the heat supply is interrupted, the water also stops boiling.

The heat of vaporization (enthalpy of vaporization) is the heat energy to be added to a liquid at its boiling point in order to completely vaporize a certain amount of the substance!

Experimental determination of the heat of vaporization

Using water as an example, the heat of vaporization required to vaporize a certain amount of water is to be determined experimentally in the following. For this purpose, water is first heated to boiling temperature with an immersion heater. Then, the vaporization of the water mass over time is observed using a balance on which the experimental setup is placed.

First, the water is heated to boiling temperature with the immersion heater. When the water begins to vaporize, the experiment can be started at any time. To do this, the balance is reset to zero and the time measurement is started. The water gradually vaporizes and the vaporized mass is displayed on the balance. At regular time intervals, the displayed mass of the balance is recorded. At each time t, the added heat of vaporization Qv up to that point can be determined using formula (\ref{q}). In this way one obtains a statement which amount of heat led to the vaporization of which mass mv.

If one plots the vaporized mass as a function of the added heat, then a proportional relationship becomes apparent. This means that in order to vaporize twice the amount of water, twice the amount of heat must be added. The evaluation of the experimental data shows that about 120 kJ of heat are necessary to vaporize 48 g of water. With a supplied heat energy of about 240 KJ, twice the water mass of 96 g has then finally vaporized.

In the case of water, the heat of vaporization to be added is more than five times as great as the amount of heat that would have had to be used to heat the water from 0 °C to 100 °C. This relatively large heat of vaporization is one of the reasons why a fire is extinguished excellently with water.

If the experiment described above is carried out with a water-alcohol mixture or with other liquids instead of pure water (e.g. molten metals that are vaporized), it can be seen that these substances vaporize at different rates. Consequently, more or less heat energy is required to vaporize a given mass of the substance. The specific heat of vaporization is therefore dependent on the substance.

It should be noted that the specific heats of vaporization are indirectly influenced by the ambient pressure, since this changes the boiling temperatures (see also the article Why does water boil faster at high altitudes?)! However, since most liquids are vaporized at an ambient pressure of 1 bar, the specific heat of vaporization usually refers to the boiling temperature at 1 bar.