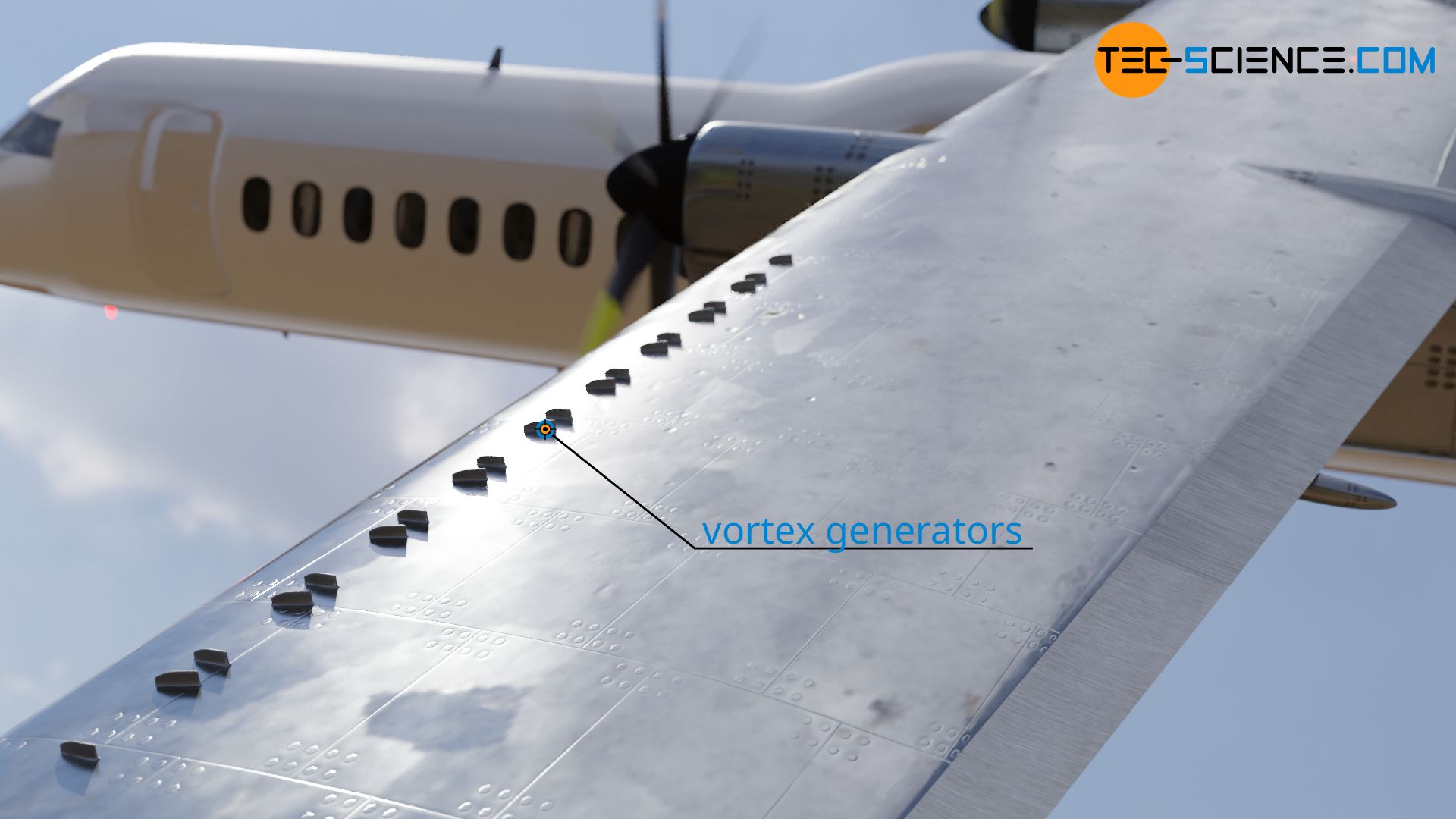 In the case of a boundary layer separation (flow separation), the flow can no longer follow the profile of the body around which it flows and separates turbulently from it.

When a fluid flows around a body, forces act between the fluid and the surface due to the viscosity. These intermolecular forces are the caue for the drag, among other things. However, due to the forces acting, the surface of the solid body also tries to bind the fluid to itself. This also leads to the fluid adhering to the surface (no-slip condition). The layer above this adherent fluid layer will not be able to simply tear itself away from it, because intermolecular attraction and pressure forces also act between the layers. As a result, any flow flowing around a body is tempted to follow the profile of the surface.

When flowing around a body, the fluid tries to follow the profile of the surface!

As long as the contour of a body has smooth transitions and the internal cohesion of the fluid (viscosity) is large enough to resist the inertial forces, a flow can follow the contour. A typical hydrodynamic boundary layer develops around the body, the thickness of which is largely influenced by the viscosity.

In the case of sharp transitions or when flowing around blunt bodies, however, the fluid is often no longer able to follow the profile. The boundary layer or flow begins to detach itself from the body surface. This is referred to as a boundary layer separation or flow separation. Downstream of the separation point, vortices often form, resulting in a turbulent flow. A flow separation is particularly dangerous on the wings of an aircraft, as this also causes a loss of lift and the aircraft is in danger of crashing. In aviation such a dangerous flow separation is called stall.

In the case of a boundary layer separation (flow separation), the flow can no longer follow the profile of the body around which it flows and separates turbulently from it.

As already mentioned, the boundary layer separation is obvious at sharp transitions. However, a stall can also occur even with smooth transitions. This is the case if the flow slows down considerably when flowing around a body. As a result, the static pressure can increase so much that it suddenly pushes the flow in the opposite direction. This results in a recirculation area, which causes a flow separation. Since a deceleration of the fluid occurs with every body, the danger of boundary layer separation therefore also exists with every body around which the fluid flows!

Depending on the shape of the body, the resulting adverse pressure gradient can become very large due to the decrease in speed and the boundary layer thickness increases significantly. In the case of the cylinder, the adverse pressure gradient even becomes so large that the flow is forced back against the actual flow direction. This results in a backflow area and the laminar flow detaches itself from the contour at this point. A so-called turbulent wake is formed behind the body. Such a turbulent wake can often be seen with ships in water and is also called dead water.

From a mathematical point of view, flow separation begins at that point on the surface where the flow is pushed back so strongly that the velocity gradient in the y-direction becomes zero (there is now a inflection point in the velocity profile!). According to Newton’s law of fluid friction, this means that the shear stress at the wall, the so-called wall shear stress τw, also becomes zero.

The separation of the boundary layer takes place at the point where the wall shear stress becomes zero! The fluid particles follow the pressure drop which acts against the main flow direction (recirculation area).

Effect of flow separation on drag

Because after the separation point the flow no longer adheres the surface of the body, the skin friction drag is almost zero. At the same time, however, the pressure drops considerably due to the energy dissipation in the turbulent wake. This leads to a significant increase in pressure drag, which is far greater than the reduction in skin friction drag. In total, the parasitic drag (air resistance) thus increases very strongly in the event of a flow separation.

The separation of the boundary layer reduces the skin friction drag, but the pressure drag increases much more, so that the overall drag significantly!

The flow around a body can not only be laminar, but also turbulent at increased Reynolds numbers. In general, a laminar flow around the body should be aimed for, since this reduces flow losses to a minimum. However, this is only the case if it is ensured that no boundary layer separation occurs. If, on the other hand, this cannot be ensured, then turbulent boundary layers should be aimed for. This may sound a paradox, but a turbulent boundary layer can usually follow the profile of a body longer than a laminar flow. The reason for this is the increased transport of momentum between the fluid layers, which leads to a steeper velocity profile within the boundary layer.

This fact is taken advantage of, for example, with golf balls. The dimples in the golf ball cause vortices and lead to a turbulent flow around the golf ball. The separation point shifts downstream and the drag is reduced to only a quarter, which makes the golf ball fly much further.

So-called turbulators (vortex generators) on the wings of aircraft act in a similar way. Often many small vanes are mounted on the wing for this purpose. These vanes create a transition from a laminar to a turbulent flow. The turbulent boundary layer, which remains longer on the wing, not only reduces drag but also the risk of hard stall. Another possibility to achieve a targeted turbulent flow around wings is the use of so-called blast turbulators. Air is blown out through small holes in the wing. This also causes the laminar flow to change into a turbulent flow.

Turbulators can also be found in racing cars. These are designed to move the flow separation as far back as possible so that the flow is still attached in the rear of the car for as long as possible.

Depending on the outline of the body being flowed around, a flow that has been detached can also reattach itself to the surface. The figure below shows the laminar flow around a vehicle. At point A, the flow separates and below it forms a kind of circulating air cushion, so that the flow can reattach to the surface at point B. This area is also called the separation bubble.

A separation bubble is a recirculation area in a flow field, which is created by the separation and reattachment of the flow!

The transition from laminar separation and turbulent reattachment takes place by disturbances in the flow, which build up like waves and finally become unstable. This wave-like build-up of the flow is also known as Tollmien-Schlichting waves.

As already explained, such a separation bubble has a considerable influence on the pressure distribution over the wing. The drag rises strongly, which is why separation bubbles on airfoils should be avoided. This is where the turbulators come into play once again. They force the turbulent transition so that, ideally, the more energetic boundary layer remains connected to the wing without separation, or at least the separation point is shifted as far back as possible.

A boundary layer can also be separated from the pipe wall in the case of flows through pipes. This is the case, for example, with sharp edges around which the flow is diverted. Separation bubbles are formed at the edges. Such dead spots resulting from flow separation mean flow losses and should be avoided. This can be achieved constructively, for example, by attaching guiding devices.

The Kármán vortex street is the periodic vortex separation around a body at high Reynolds numbers!

The vortex shedding frequency f is given by the dimensionless Strouhal number Sr. It results from the characteristic length L (e.g. diameter of a cylinder) and the flow velocity v:

The Strouhal number is usually in the range of 0.1 to 0.3, so that in many practical cases a value of 0.2 can be assumed. For such cases, the vortex shedding frequency f can be calculated with the following formula:

If, for example, a overhead power line with a diameter of 30 mm is flowed around with a wind speed of 15 m/s, this results in a vortex shedding frequency in the order of 100 Hz. Since these frequencies are in the audible range, this can be perceived as a low buzzing noise.

However, the periodic vortex shedding can sometimes bring a great danger. The structures around which the flow passes can begin to oscillate very strongly due to resonance if the vortex shedding frequency corresponds to the natural frequency of the structure. The famous collapse of the Tacoma Narrows Bridge in 1940 was attributed to such a phenomenon.