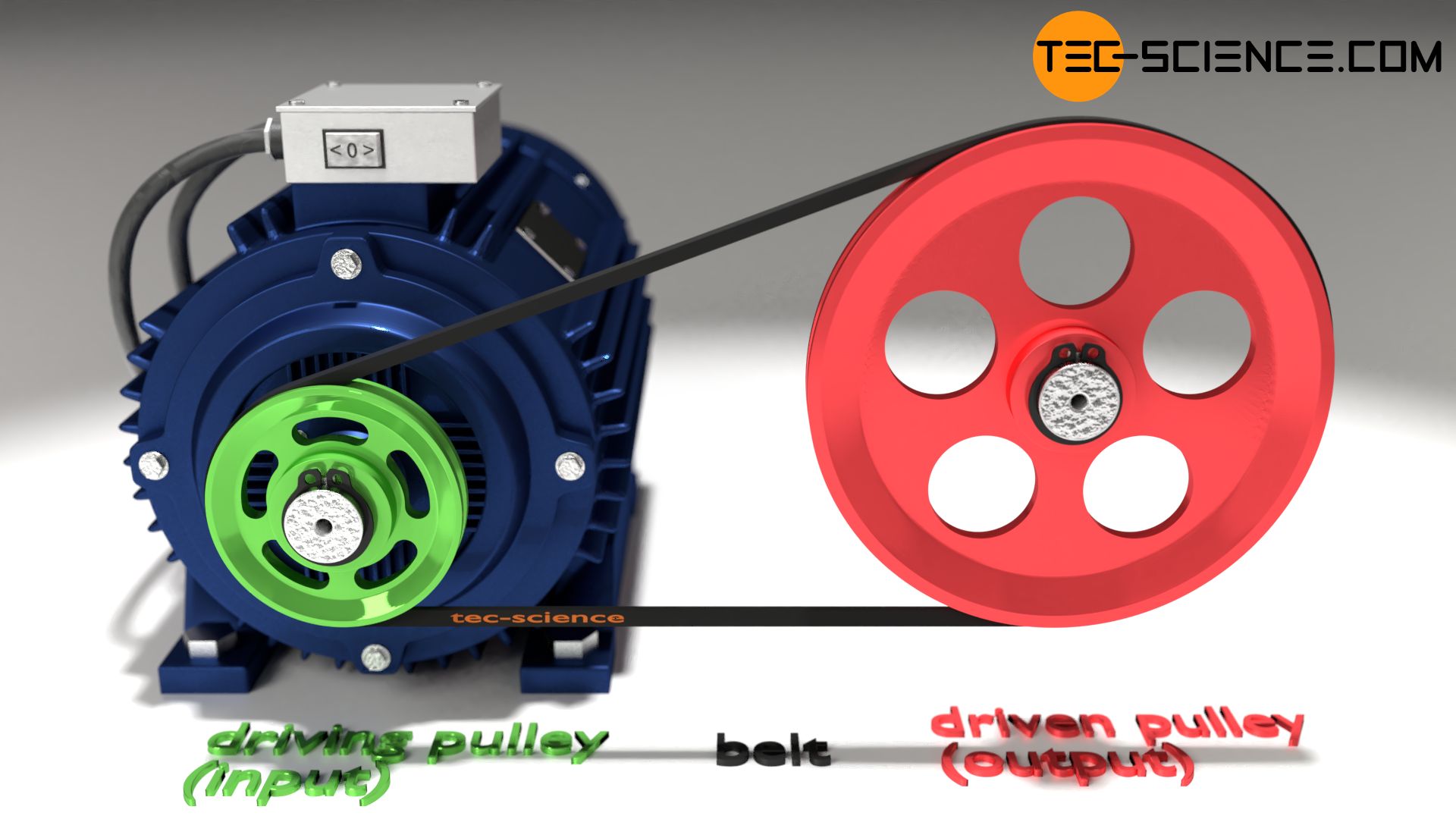 In belt drives, the power transmission between the driving pulley and the driven pulley is usually force-locked by flexible belts.

In belt drives, the power transmission is generally friction-locked by frictional forces between the belt and the pulley (exception: toothed belt drives)!

In the case of friction-locking power transmission, the belt must be pressed against the pulley with a certain contact force. This is the only way to ensure that the frictional force is large enough to prevent the belt from slipping over the driven pulley or the driving pulley from rotating faster than the belt.

Ideally, the maximum force to be transmitted corresponds to the maximum static friction force acting between the belt and pulley. If the force to be transmitted is greater than the static friction force, the belt slips over the pulley and only the lower sliding friction force is effective (called sliding slip). As a result of the relative motion between belt and pulley, the belt wears very heavily and becomes unusable in a very short time. Such a sliding slip of the belt or pulley must therefore be absolutely avoided.

The maximum transmittable force with belt drives corresponds to the static friction force between belt and pulley!

Two parameters have a special influence on the static friction force and thus on the maximum transmittable force. Firstly, the belt tension, which ensures that the belt is pressed against the pulley with a certain force and can thus generate the necessary static friction force. On the other hand, the belt must wrap the pulley sufficiently tightly so that the necessary adhesive contact can be made.

To be able to transmit high forces, the belt must be wrapped around the pulley as much as possible and the belt tension must be as high as possible!

Tight and slack side of a belt

Note that on the slack side, the belt is also exposed to a tensile load! The acting tensile loads are smaller than on the tight side but still present and they must even be present. Because if no belt forces would act on the slack side, this would mean nothing else than that the belt would have no tension. However, a belt tension is absolutely necessary so that the belt can press against the pulleys and thus generate the necessary static friction for power transmission. Special tensioning systems ensure that the belt tension is maintained during operation (see section Belt tensioning systems).

The high belt forces on the tight side cause the elastic belt to be tensioned relatively strongly. The belt is stretched and will then sag slightly in the less stressed belt section on the slack side. Only if the belt drive is not under load the belt forces on both sides are equal and there will be no sagging. Note that depending on the direction of rotation of the belt drive, the tight side and slack side as well as the associated deflection are reversed (see animation above).

In the following, a single-stage belt drive with two pulleys that are wrapped around by a common belt is considered. The magnitude of this wrap is described by the wrap angle \(\varphi\).

The wrap angle is defined as the angle between the run-up and run-off of the belt on the pulley.

The larger the wrap angle, the more adhesive surface the belt has and the greater the frictional force or the force that can be transmitted. However, it must be noted that the pulleys of a belt drive are wrapped to different degrees by the belt if the pulleys have different diameters!

The maximum transmittable force is usually limited by the smaller of the two pulleys (usually the driving pulley), as this pulley has a smaller wrap angle compared to the larger driven pulley. In addition, the greater curvature causes greater bending stresses in the belt, which also limit the transmittable belt force.

So called idler pulleys can be used to increase the wrap angle. These are usually placed near the actual pulleys to achieve the greatest possible wrapping effect. If these pulleys are used to tension the belt at the same time, they are also called tensioner pulleys.

To increase the wrap angle and thus the transmittable force, idler pulleys can be used!

The figure below shows a belt drive of a dryer drum as an example of the use of an idler pulley (the drum itself serves as the output pulley). In order to increase the wrap angle on the drive shaft and thus ensure sufficient power transmission, a idler pulley was used.

To ensure that wrapping is not reduced under load, the slack side should be arranged over the tight side!

However, the change of the wrap angle under load plays a subordinate role in practice and can often be neglected (especially with high coefficients of friction). See also the article Power transmission of a belt drive.