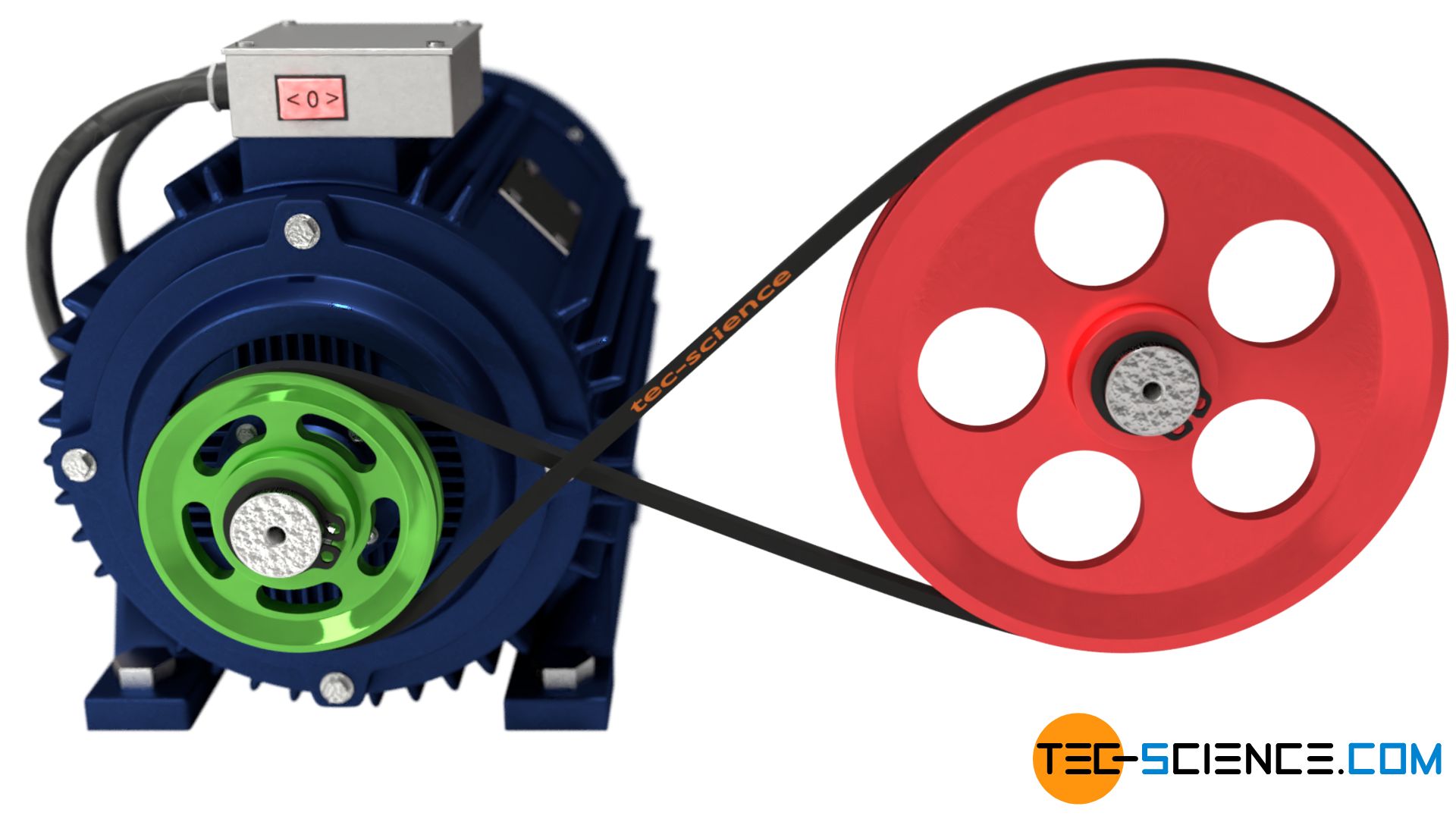 Learn more about the advantages and disadvantages of belt drives compared to gear drives in this article.

Compared to a gear drive, a belt drive can be used to bridge greater distances between two shafts in a simpler way. Chain drives also offer this advantage and are therefore used for bicycles where a relatively large distance has to be covered between pedal and rear wheel.

Frictionally operating belts such as flat belts or V-belts also offer a natural overload function. In contrast to gear drives, overload simply causes the belt to slip through (sliding slip). This protects the transmission from major damage. In the worst case, only the belt needs to be replaced and not the entire gears and shafts as in the case of a damaged gear drive.

Another advantage of belt drives is the elasticity of the belts compared to rigid gears. This offers good damping characteristics (shock absorption), especially in the case of sudden torque changes. This is why belt drives are used, for example, in grinding plants or stone crushers. The starting and stopping behaviour is also damped accordingly and is not as jerky as with rigid gear drives. Note, however, that a high elasticity of the belt also results in increased elastic slip. Belts can therefore not be made too elastic, but neither can they be designed too inelastic, as otherwise the positive shock absorption properties would be missing.

An additional advantage of belt drives over gear drives is their insensitivity to angular misalignment as long as the axes continue to run in a parallel plane to each other. In many cases, such a misalignment is even deliberate. This makes it easy to redirect the direction of rotation. If the axis of the output shaft is turned by 180° and the belt is crossed, the original direction of rotation can easily be reversed. In contrast to an open belt drive, this is also referred to as a crossed belt drive.

Belt drives do not have to be lubricated in comparison to gear drives. This reduces maintenance costs accordingly. Belt drives also have lower noise emissions than gear drives, since no metallic teeth engage but only relatively soft, elastic belts drive the pulleys. This enables the transmission of high rotational speeds.

In addition, pulleys are usually not complete solid wheels, as is often the case with gears. Pulleys usually have recesses to reduce weight and manufacturing costs. As a result, belt drives are generally lighter than comparable gear drives.

However, the above-mentioned advantages of belt drives are also countered by disadvantages. Depending on the ambient conditions, belts are subject to more or less severe ageing phenomena, i.e. they lose their elastic properties over time and must be replaced. For this reason, belts can only be used within a certain temperature range. In addition, over time the belts become plastically stretched, so that they have to be re-tensioned at regular intervals.

Another disadvantage of some belt types such as flat belts or V-belts is the associated slip, which reduces the efficiency of the transmission accordingly. Slippage can only be prevented with timing belts due to the positive force transmission.

In some cases, the increased space requirement of a belt drive compared to a gear drive can also have a disadvantage. This is due to the fact that the belt pulleys cannot be placed directly against each other, while the toothed wheels of gear drives can even mesh with each other and thus be set up in a more space-saving manner. In addition, the wrap angle decreases with decreasing centre distance, so that wrapping can become unacceptably small. Although this can be compensated by idler pulley, it not only increases the design effort but may also increase the required space again.