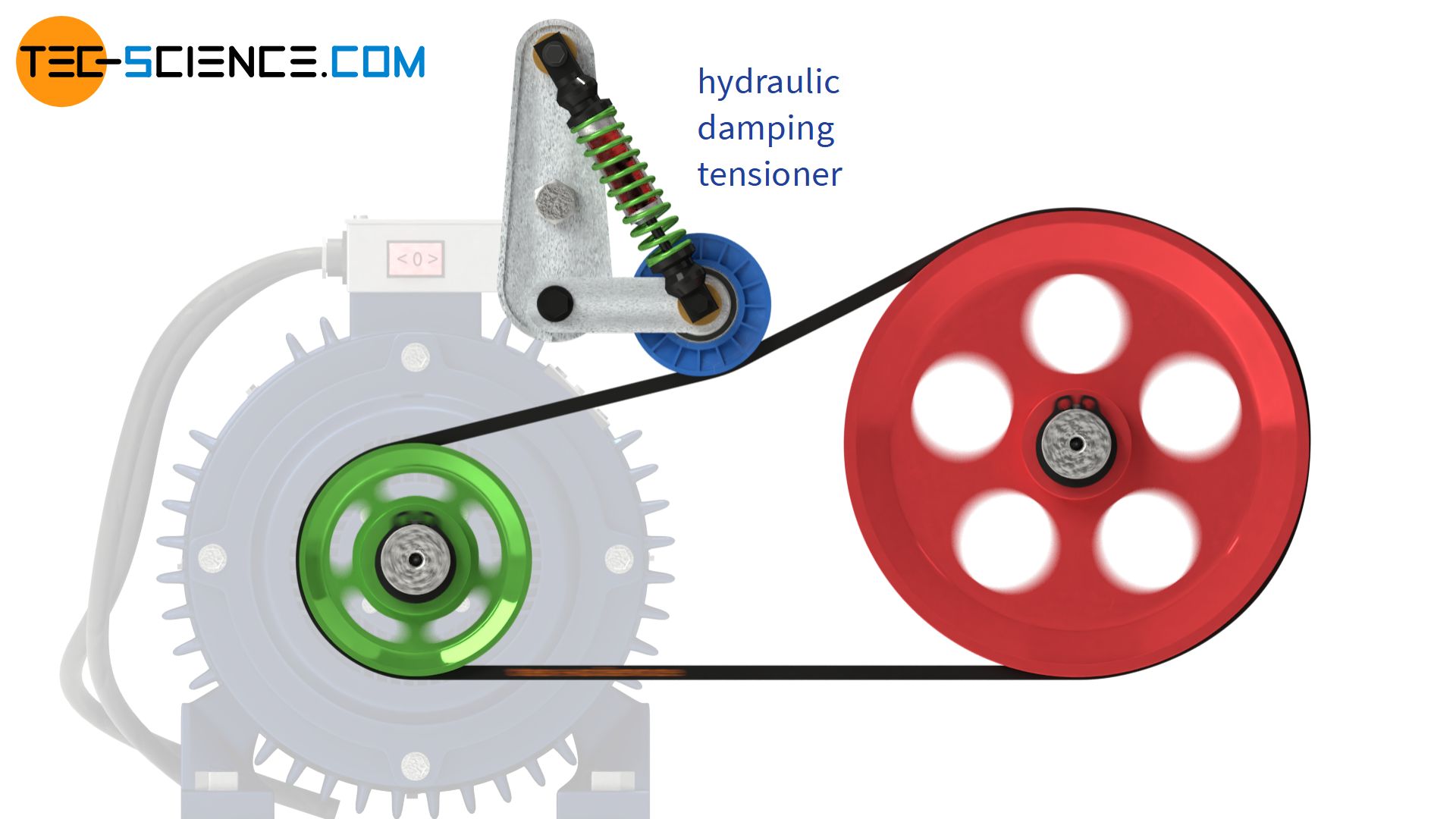 Various belt tensioner systems are used to maintain the tension in the belt. The most important ones are described in more detail below.

Why mus belt tension be assured?

The importance of the belt tension for power transmission has already been explained in the article How does a belt drive work?. Despite the pre-tension (initial tension), however, the belt tension will change during operation due to plastic deformation or temperature. For this reason, belt drives must often be kept on tension by so-called tensioning systems.

It must also be borne in mind that a belt will have to be serviced over time and therefore have to be removed from the pulley and remounted. This is hardly possible when the belt is under tension, so that the tension must be removed when the belt is changed and must be tensioned again after installing by means of tensioning devices (belt tensioners).

If such pulleys are merely used to deflect the belt, then these are generally referred to as idler pulleys. Idler pulleys are used, for example, in multiple drives in which one driving pulley drives several other pulleys. Idler pulleys can also be used for long belt lengths to reduce belt vibrations. Such pulleys can also take over the function of a guide at the same time, so that the belt does not jump off the pulley. Such pulleys are called guiding pulleys or guide rollers. Guiding pulleys often have protrusions (called flanged pulleys) on the left and right, between which the belt is held in track.

Another way of generating a belt tension is by an eccentric mounting of the tensioner pulley. The desired belt tension can then be set by rotating the pulley to a certain position. In addition, torsion springs can be installed in the pulley, which then allow dynamic adjustment of the belt tension during load changes.

Another way of tensioning a belt is by means of a lever arm to one end of which the tensioner pulley is attached and held in place by a spring.

However, if frequent load changes occur during operation, this tensioning system can be excited to strong vibrations. Hydraulic damping systems such as those found in door closers, for example, can therefore be used to absorb shocks. A piston is then placed in oil, which provides the necessary damping effect due to its viscosity.

Besides the use of tension pulleys, the belt tension can also be applied by adjusting the driving pulley itself. When so-called motor slide bases are used, the entire motor is mounted on a movable slide which runs in a fixed guide.

The position of the carriage on the guide and thus the belt tension can be adjusted. However, if the belt tension decreases or if there are strong load changes, the motor slide base does not automatically adapt to the changed conditions but must be readjusted manually.

A dynamic adaptation of the belt tension to the existing load conditions (or to plastic expansion processes) can be achieved by using a self-tightening motor base. The motor is screwed onto a pivoting motor base, whereby the centre of gravity of the entire system is designed in such a way that the motor tends to tilt backwards. At an inclination of about 15° to 20°, the motor base with its weight ensures a permanent and almost constant belt tension.