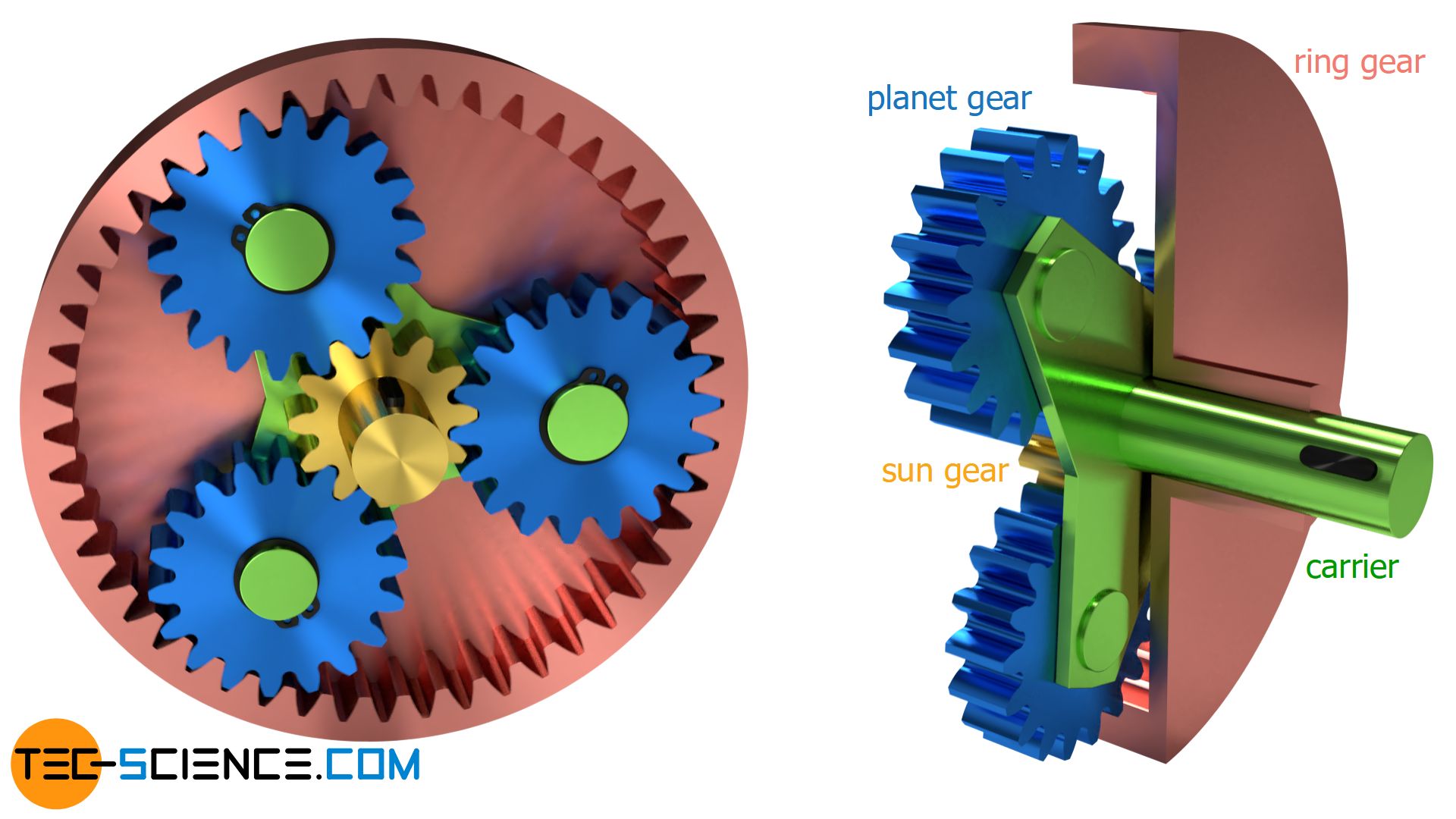 A planetary gear is an epicyclic gear in which several gears (planet gears) mesh with a central gear (sun gear).

So-called stationary gearboxes are characterised by the fact that the gear wheels have stationary axes of rotation. The figure below shows a 2-stage stationary transmission with three gears. An input gear drives an output gear by an idler gear (intermediate gear).

The transmission ratio i1 or i2 of the respective gear stages is determined by the ratio of the corresponding number of teeth on the idler gear zidler and input gear zin or output gear zout.

Instead of the externally toothed output gear, a ring gear with internal toothing can also be used in principle. As long as the number of teeth is not changed, this has no effect on the overall transmission ratio according to the equation (\ref{i}). Only the sense of rotation of the output gear will change as a result.

Note that the number of teeth of the idler gear according to the equation (\ref{i}) has no effect on the overall transmission ratio anyway and can therefore be arbitrarily chosen in principle!

A disadvantage of the present gearbox is that the input shaft (as well as the output shaft) is subjected to a bending load by the one-sided flank force. In the figure below, F denotes the reaction force of the idler gear acting on the tooth flank of the input gear.

However, bending stresses can be avoided if several intermediate gears are arranged symmetrically so that the flank forces compensate each other in their bending effect. In the case obtained with three idler gears, the input and output shafts are no longer subjected to bending load but only to torsion.

Mounting the idler gears on a carrier

In principle, the present gearbox already forms the pre-stage of a planetary gear. The last step consists only of mounting the idler gears on a so-called carrier. The carrier itself is connected to a shaft and is guided coaxially through the output shaft, which is designed as a hollow shaft.

At this point, the necessity of a symmetrical arrangement of the planet gears becomes also apparent, as otherwise enormous unbalance forces would occur at high rotational speeds.

With a planetary gear, different transmission ratios can be achieved, depending on the shaft at which the input or the output takes place and the gearwheel that is locked firm. The different transmission ratios will be explained using the example of the planetary gear shown below. The sun gear has zs = 12 teeth, the planet gears zp = 18 teeth and the ring gear zr = 48 teeth.

The derivation of the transmission ratios shown in the following will be discussed in detail in a separate article due to their complexity.

The highest transmission ratio of i=5 is obtained in this case when the gearbox is driven by the sun gear and the ring gear is fixed. The output then takes place by the carrier. Obviously, the lowest transmission ratio of i=0.2 (=1/5) is obtained when input and output are reversed while the ring gear remains fixed. The direction of rotation of the input and output shafts is maintained in both cases.