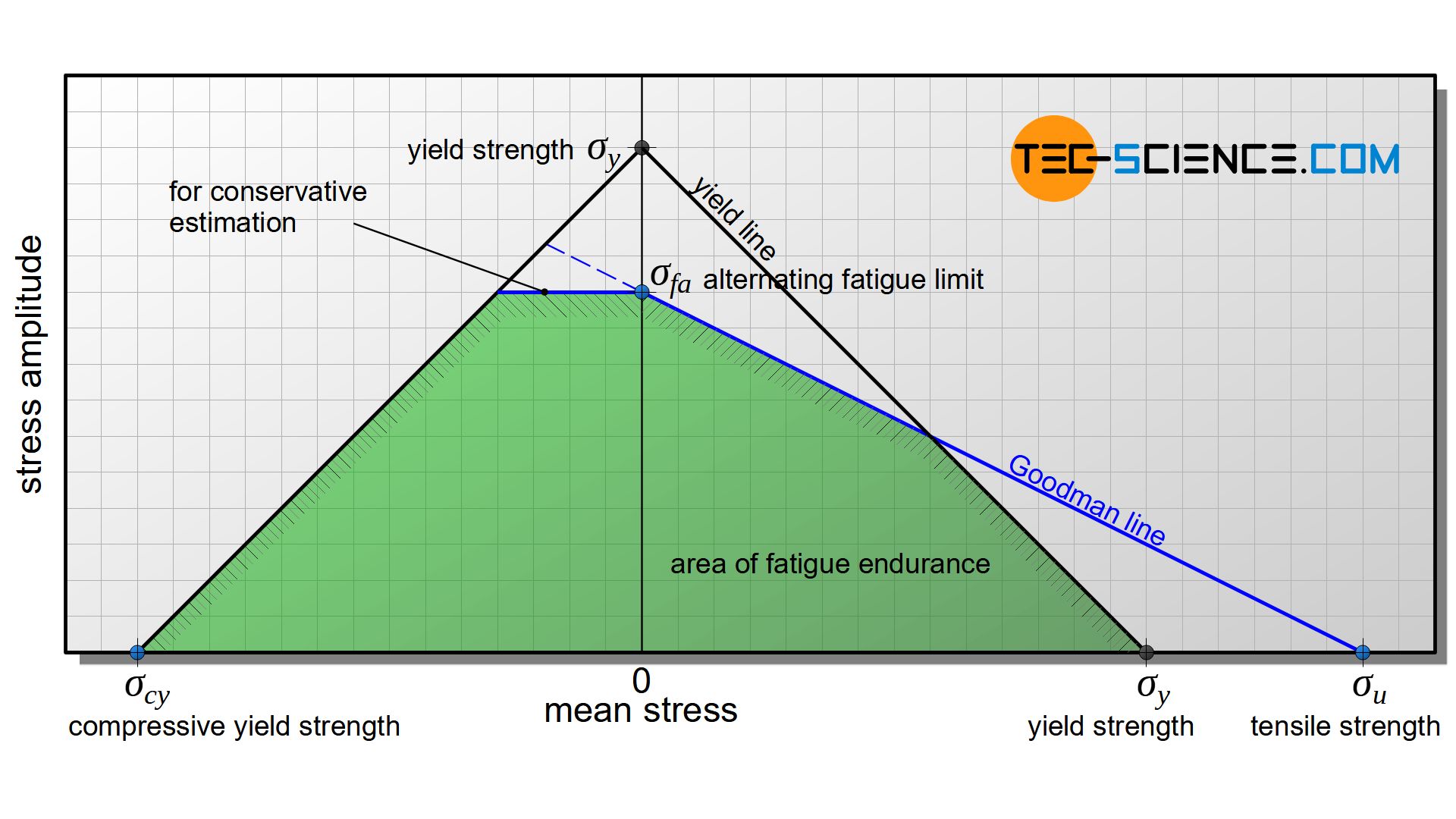 Fatigue limit diagrams according to Haigh or Smith show the maximum yieldable stress amplitude as a function of the mean stress.

Although the Wöhler curve is suitable for the evaluation of fatigue tests, it is not informative for the engineer. For example, a Wöhler curve only applies to a certain mean stress. With dynamically loaded components, however, the mean stress often changes in practice, which in turn influences the fatigue strength. In order to show the influence of the mean stress on the fatigue strength, many further curves for the most different mean stresses would have to be included in the stress-cycle diagram. The clarity would suffer greatly from this.

For this reason, special diagrams are used to illustrate the influence of the mean stress in a clearer way. The most important diagrams are those introduced by Haigh and Smith. If fatigue limit is taken as the basis in such diagrams, one speaks of fatigue limit diagrams. If, on the other hand, a certain number of load cycles to be endured is used as the basis, one speaks of fatigue strength diagrams.

In the fatigue limit diagram according to Haigh, the bearable stress amplitude is applied directly against the mean stress. Such a Haigh diagram is also referred to as a Goodman diagram. The intersection of the curve with the vertical axis corresponds to the alternating fatigue limit\(\sigma_{fa}\), since the mean stress there is zero (stress ratio \(R=-1\)). The intersection of the curve with the horizontal axis, however, can be interpreted as ultimate tensile strength \(\sigma_u\), since the specimen would theoretically fracture without an existing stress amplitude, i.e. solely due to the applied mean stress (stress ratio \(R=1\)).

Especially with high mean stresses, however, the Haigh curve or Goodman line is only of theoretical significance, as the yield point is already exceeded in this range, resulting in unacceptable plastic deformations. The practical limit therefore does not extend up to the tensile strength \(\sigma_u\) but rather only the to yield strength \(\sigma_y\) (or to the offset yield strength).

In this way, two straight lines are obtained in the diagram (Goodman line and yield line), which limit the technically permissible fatigue endurance range. In practice, therefore, only knowledge of the alternating fatigue limit \(\sigma_{fa}\), the tensile strength \(\sigma_u\) and the yield strength \(\sigma_y\) (or the offset yield strength) is sufficient to produce a simplified Haigh diagram.

How to create a Haigh Diagram

The Haigh diagram is obtained by drawing the Goodman line from the point of alternating fatigue limit \(\sigma_{fa}\) on the y-axis to the point of tensile strength \(\sigma_u\) on the x-axis. Then the value of the yield strength is marked on both axes and connected with a straight line (yield line). Goodman and yield line now mark the area of fatigue endurance limit.

To facilitate reading the fatigue limit for a given stress ratio \(R\), selected stress ratios are often included in the diagram. For each mean stress, the permissible stress amplitude for continuous operation of the material can now be easily read off in the Haigh diagram.

Extension of the Haigh diagram for compressive mean stresses

In principle, the Haigh diagram can also be extended to negative mean stresses and thus the fatigue limits for compressive loads can be shown. The compressive yield strength \(\sigma_{cy}\) is then used as the limiting value for the mean stress. This value is entered on both axes in the same way as for tensile stress and then connected to each other by a straight line. The extrapolation of the Goodman straight limits the area. Whether this extrapolation of the Goodman line is always permissible, however, must be checked separately! For a conservative estimation, this line segment can also be assumed to be horizontal in first approximation.

Note, that due to the effect of “crack closing”, fatigue limits for compressive loadings are in general higher than for tensile loadings. This effect is particularly pronounced in lamellar graphite casting, since the graphite lamellae permit only relatively low tensile stresses due to their notching effect. In contrast, lamellar graphite cast iron absorbs compressive stresses much better.

How to create a Smith diagram

For simplification, the maximum und minimum stress curves can be approximated again as Goodman lines. For practical reasons, there is also an additional limitation, since so far the diagram only takes into account the fracture criterion. Usually, however, inadmissible deformations which occur at stresses above the yield point are decisive. Therefore, the Goodman lines only run up to the maximum value of the yield strength. This applies to both the maximum stress (point A) and the mean stress (point B), since of course the mean stress must not exceed the yield point too.

As soon as the yield strength at point A is reached, the line of the maximum stress continues as a horizontal line. However, this leads to a corresponding adjustment of the minimum stress, since the stress amplitudes to the maximum and minimum stress must be symmetrical to the mean stress. To make this adjustment, the distance from point A and the mean stress line is symmetrically shifted downwards and the Goodman line of the minimum stress is reached (point C). The two Goodman lines and the polyline of points A, B, and C now limit the technically relevant fatigue endurance range.

In the Smith diagram, the permissible maximum and minimum stress for a fatigue endurable use of the material can now be read off directly for each mean stress. Using an auxiliary line under 45 degrees, the stress amplitude can also be determined relative easily as the distance to the Goodman line.

Further information on creating the Smith diagram can also be found at construccionenacero.com.

Extension of the Haigh diagram for compressive mean stresses