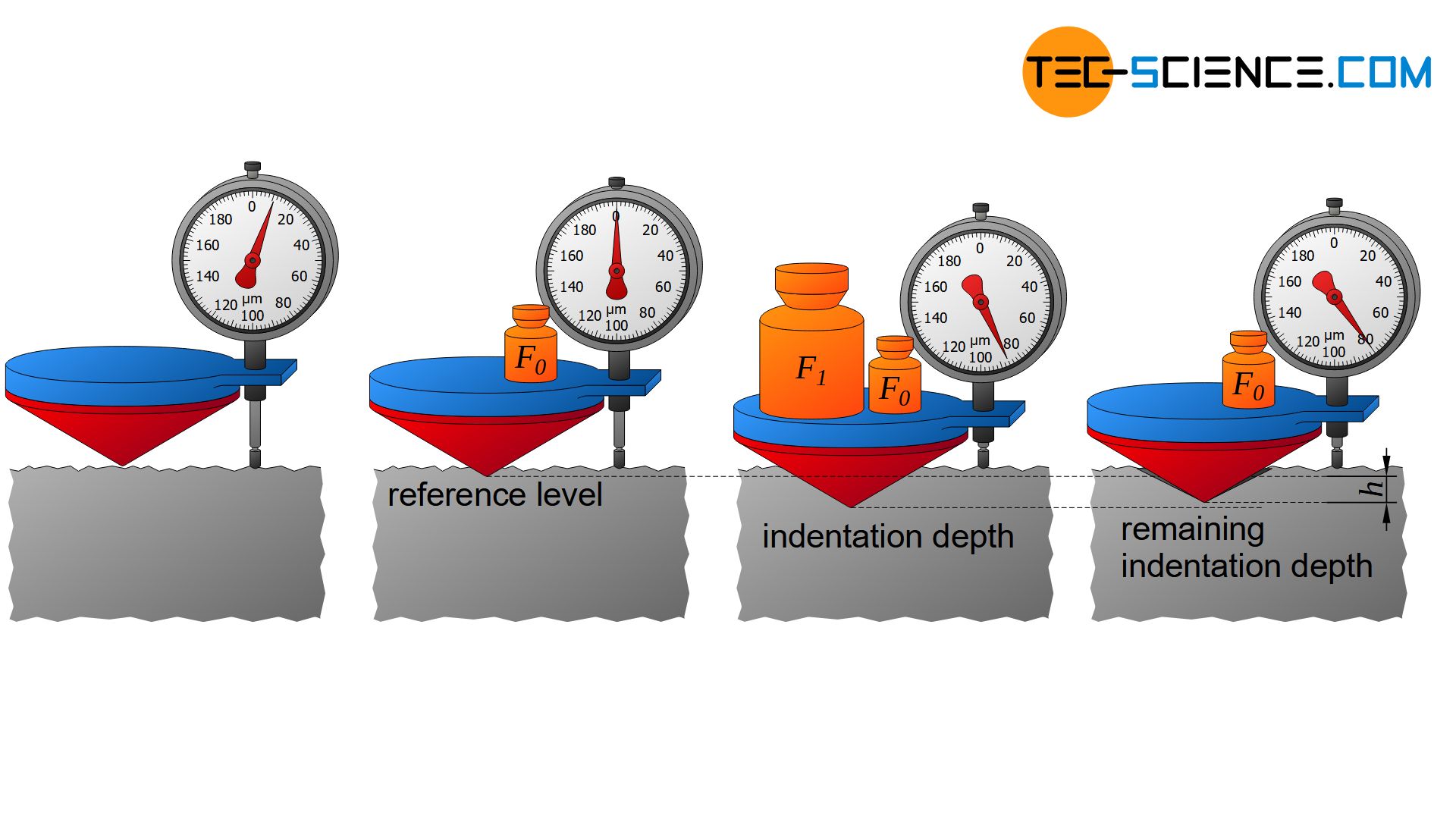 In the Rockwell hardness test, an indenter is pressed into the material. The indentation depth serves as a measure of the hardness!

In the Rockwell hardness test, the measure of the hardness is not an indentation surface but an indentation depth. Either a carbide ball or a rounded diamond cone with a tip angle of 120° and a tip radius of 0.2 mm serves as the indenter. The indentation depth can be read directly from a dial gauge via the traverse path of the testing machine.

In the Rockwell hardness test, an indenter is pressed into the material to be tested. The indentation depth serves as a measure of the hardness!

The measuring process of the Rockwell test is carried out in three steps. First, the indenter is placed on the surface to be tested with a so-called preload F0 of 98 N. In this way, the influences of possible setting processes in the sample and any clearance in the measuring instrument can be compensated. After the preliminary test force has been applied for a short time, the dial gauge is set to zero (reference level). The actual hardness value can then be determined.

The actual test load F1 is applied in addition to the preload and the indetor penetrates the material with the total force F=F0+F1. The test load to be set is taken from table books depending on the indenter and the material to be tested.

After the indenter has penetrated the material with a given total force, the test force F1 is removed again. Finally, the material is only stressed by the preload F0 and the indenter is slightly raised again by the elastic material behavior of the sample. However, contact with the sample remains. The remaining indentation depth h (in mm) while maintaining the preload F0 is finally measured and used to determine the hardness value.

Depending on the indenter (diamond cone or carbide ball), the unit-less hardness value HR can be determined using the following formulae:

The testing method with a diamond cone is particularly suitable for very hard materials such as hardened or tempered steels. Apart from special procedures, the preload is 98 N (10 kp). The actual test load can vary depending on the application.

In process variant C, the specimen is subjected to a test load of 1373 N (140 kp). However, especially when testing thin sheets, there is a risk that the material will only bulged out on the opposite side due to the high test force and thus falsify the measurement result.  For this reason, variant A was introduced for diamond cone testing, which operates with a reduced test force of 490 N (50 kp). In addition, there is the less common variant D, in which the hardness value is determined using a test load of 883 N (90 kp). For its determination also equation (\ref{rockwellhaertewert_1}) is used.

However, when testing relatively soft materials, the diamond cone would penetrate far too deeply into the material and would lie outside the reference depth of 0.2 mm. Therefore, soft surfaces are tested with carbide balls and the reference depth is extended to 0.26 mm. However, the division of the degrees of hardness in steps of 0.002 mm is maintained. This results in hardness values in the theoretical range of 0 (full indentation depth to 0.26 mm) to 130 (no indentation depth) when using carbide balls.

When using a carbide ball for hardness testing, a main distinction is made between process variants B and F. In contrast to diamond cone testing, they are suitable for softer metals such as construction steels or brass. The ball has a diameter of 1.5875 mm (=1/16 inches). In all process variants the preload is 98 N (10 kp). The procedures differ again only in the actual test load. In variant B the test load is 883 N (90 kp) and in variant F the test load is 490 N (50 kp). Due to its reduced test load, process variant F is particularly suitable for very soft materials such as copper or thin sheets.

Hardness values obtained with different process variants cannot be compared with each other. In addition, the hardness value obtained with a certain process method must lie within a certain range. For values outside this range, the method should be changed because the indenter has either penetrated too strongly or too weakly into the material.

The advantage of Rockwell hardness testing is the relatively short testing time and good automation capability, as the measured values are determined directly from the indentation depth without optical measurement under a microscope. This process is therefore particularly suitable for automated production.

A disadvantage of the Rockwell process is the relatively small depth range. Even small indentations in the material can lead to significant deviations in the indentation depth and thus in the hardness value. In addition, it is particularly difficult to differentiate between materials with high hardness values due to the small differences in depth.

Indication of the hardness value

The standard-compliant specification of Rockwell hardness consists of the hardness value and the test method.