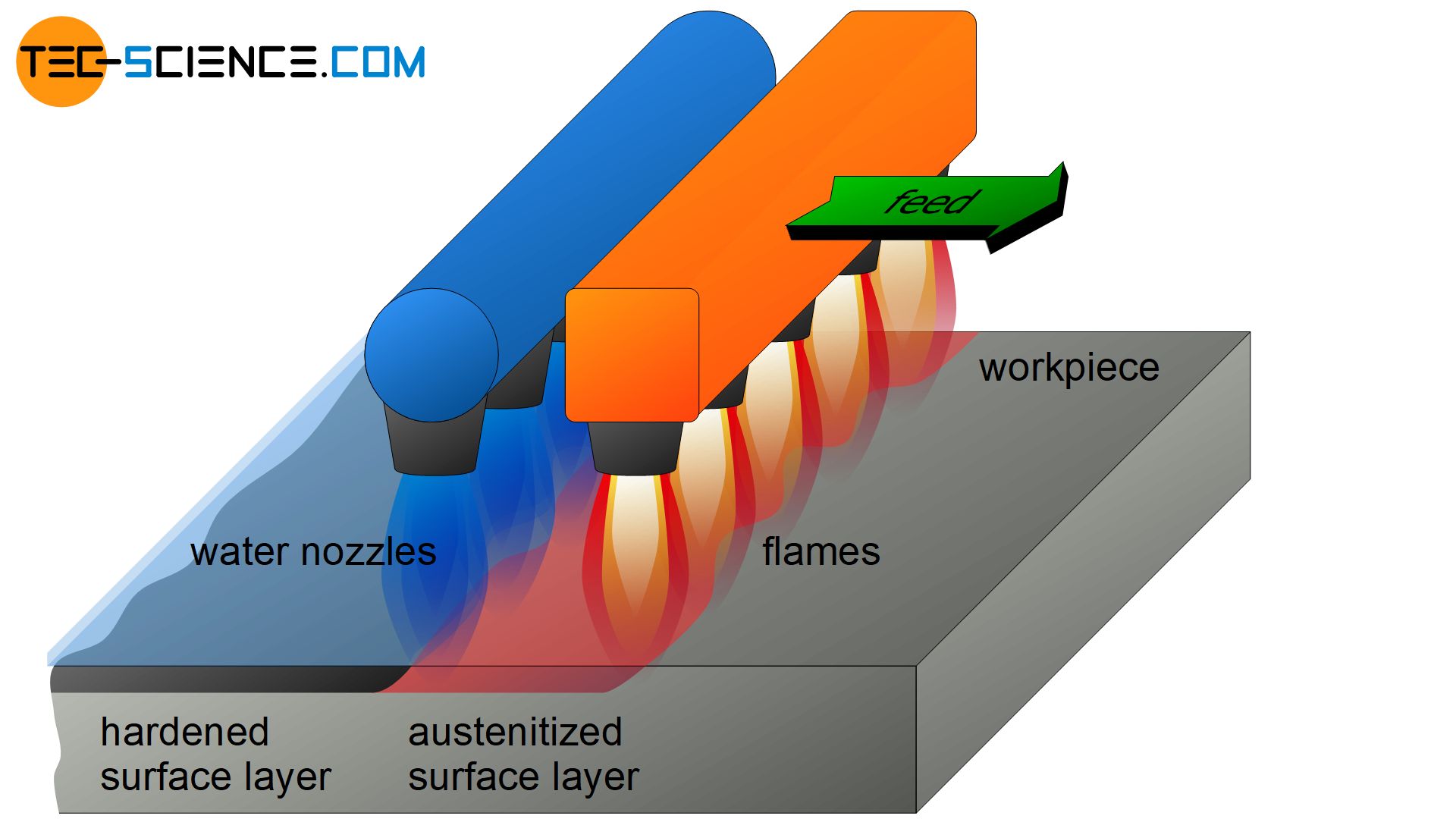 Surface hardening is used to produce a hard and wear-resistant surface layer on steel workpieces, while the toughness in the core is largely retained.

A hard surface layer is essential to increase the wear resistance of contacting components. In these cases quenching an tempering can be used as a possible heat treatment. The disadvantage, however, is the decreasing toughness or increasing embrittlement of the steel, which can lead to unforeseeable material failure. For this reason, it may only make sense to harden the surface of a workpiece so that the component core still retains its toughness (partial hardening). This is known as surface hardening.

With surface hardening, only the surface layer is hardened to increase the wear resistance, so that the component core remains tough!

Toothed wheels are typical cases where surface hardening is used. However, crankshafts or camshafts are usually also surface-hardened after quenching and tempering. Depending on the application, different surface hardening methods have developed. These include:

With flame hardening, a burner flame is passed over the workpiece surface to be hardened, which is then austenitized. Water nozzles are installed directly behind the burner flames, which then provide the necessary cooling to form martensite (quenching). Subsequent tempering is not usual for flame hardening! This generally also applies to the other surface hardening processes, as the unhardened core provides sufficient toughness.

The thickness of the hardened surface layer depends on the speed at which the burner flames are moved over the workpiece surface (called feed). The slower the speed, the deeper the heat can penetrate and austenitize the microstructure and the thicker the hardened surface layer will be after quenching. At the same time, of course, the necessary cooling rate for martensite formation in the deeper marginal layers must also be ensured! Since alloying elements generally reduce the critical cooling rate, deeper surface layers can be hardened with high-alloy steels.

With flame hardening, burner flames are moved over the workpiece and quenched with water nozzles! The hardening depth is controlled by the feed rate!

In principle, heating should be carried out as quickly as possible in order to keep the heat-affected zone on undesired areas to a minimum. Otherwise there is a risk of thermal stresses or distortion of the component geometry (hardening distortion). In addition, long heating times lead to increased scaling, which usually requires special postprocessing. In the case of rapid heating, however, it must be noted that there is no longer a thermodynamic equilibrium state in the microstructure. As a result, the transformation temperature for austenitization shifts towards higher temperatures!