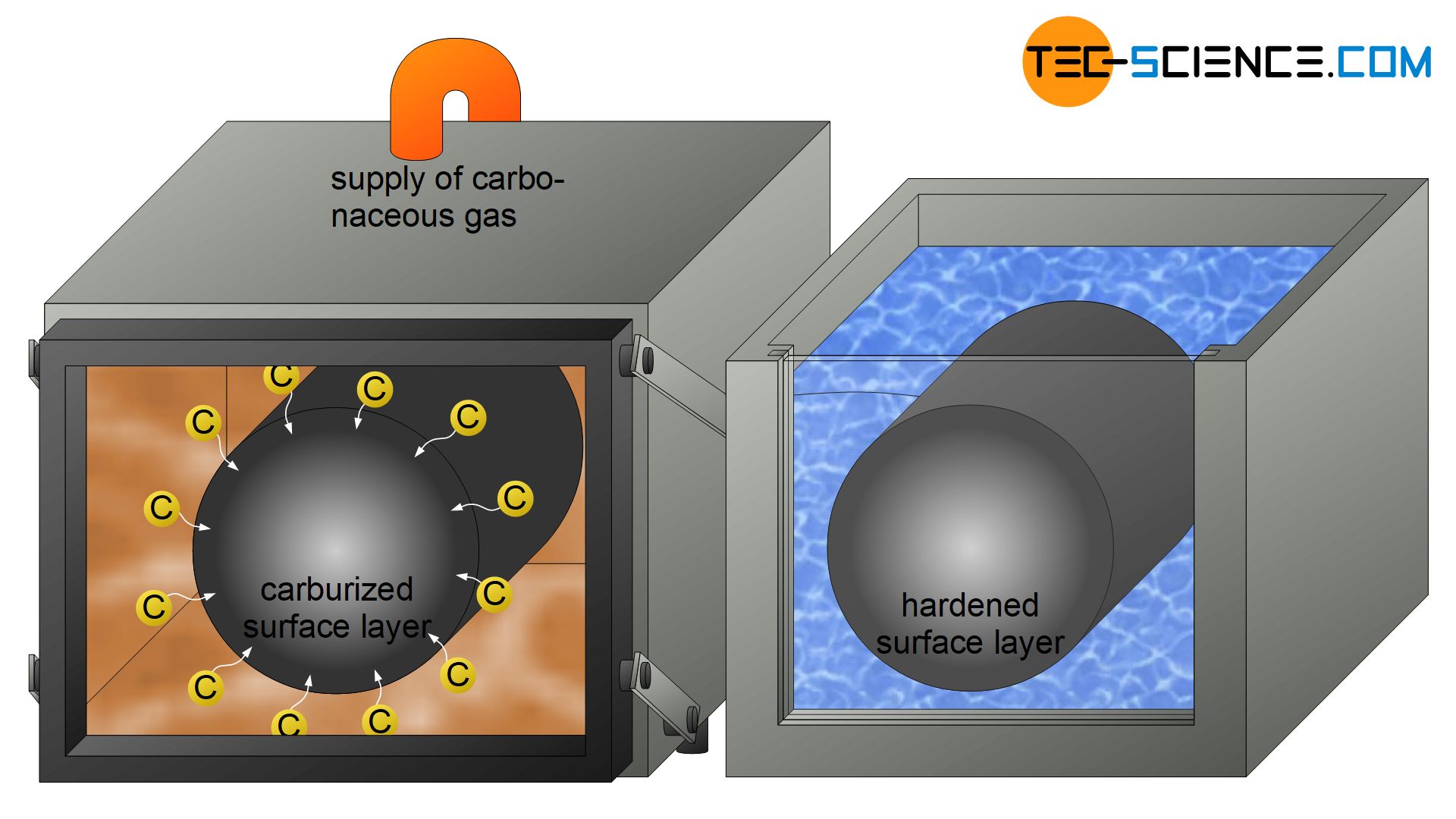 With case hardening, low-carbon steels are first enriched with carbon in the surface layer (carburisation) and then quenched!

The toughness (ductility) of steels increases with decreasing carbon content, as then less brittle cementite is found in the microstructure. If components are to be very tough, they must inevitably be relatively low in carbon. At the same time, however, the hardenability of the material decreases due to the low carbon content, since the forced-dissolved carbon in the lattice in particular leads to the necessary formation of martensite. As a guideline, the carbon content should be at least 0.3 % for hardening. However, components such as toothed wheels must combine both contradictory properties:

For such applications case hardening is suitable, which is generally structured as follows:

In case hardening, a low-carbon steel (case hardening steel) with a maximum of 0.2 % carbon is first exposed to a carbon-containing environment. In the early days, the steel was practically placed in a “case” of glowing coke. The carbon then diffuses into the surface layer, where it leads to an enrichment of the carbon content to a hardenable level of about 0.8 % carbon, while the core remains low in carbon. This carbon accumulation in the surface layer is also called carburisation.

Since only the austenite structure is able to absorb sufficient amounts of carbon, the temperature during carburizing is above 900 °C with a carburizing time of several hours. Carburizing depths of 0.1 to about 5 mm can be economically achieved with this method. Since carburizing is a diffusion-controlled process, the carburization times can be reduced with higher temperatures, but at the same time the risk of coarse grain formation increases.

Carburizing can be carried out in different ways. During gas carburizing, the component is exposed to a carbon-containing atmosphere. This is particularly economical in mass production. Carburisation in salt baths is also possible. In addition, it is possible to carburize workpieces in powdered carbon granulate.

After the surface layer has been carburized to the desired hardenable level, the actual hardening process takes place, whereby the relatively low-carbon core is slightly quenched and tempered. The quenching required for this can be either done

After quenching, the hardened components are always tempered and thus obtain their final service properties. Above all, the increase in fatigue strength makes case hardening very interesting for dynamically stressed components such as gears or drive shafts.

With case hardening, low-carbon steels are first enriched with carbon in the surface layer (carburisation) and then quenched! Such components are characterised by their high surface hardness combined with a very tough core (since low-carbon content)!

Single quench hardening is a special case hardening process. It is suitable for steels that tend to form coarse grains during carburizing or for components that still require intermediate machining before hardening. In this process, the steel is cooled slowly after carburizing. For the actual hardening process, the steel is then heated again in a separate process step. The \(\gamma\)-\(\alpha\)-transformations cause a recrystallisation effect, which leads to grain refinement of the coarsely grown grains during carburisation.

The hardening temperature can be selected so that the austenitisation mainly takes place in the marginal area (due to the carburised surface, the temperature required for complete austenitisation is lower there than in the lower-carbon core area!) This austenitized state at about 750 °C is then quenched to achieve the desired martensite formation in the surface layer.

With double quench hardening, first the desired properties of the core are adapted (core hardening) and then those of the surface (surface hardening)!

The reheating during single and double quench hardening makes these processes relatively energy- and time-intensive and therefore expensive. The advantage, however, is the grain refinement that occurs through the \(\gamma\)-\(\alpha\)-transformations. However, for steels that do not tend to form coarse grains in the first place (e.g. chrome-molybdenum steels), it is therefore economically more sensible to quench the steel directly after carburizing from the already heated state. Fine grain steels are also suitable for this direct hardening process, which is explained in more detail in the following section.

Single and double quench hardening is usually carried out on steels with a tendency to coarse grain formation, as a recrystallisation effect occurs during the \(\gamma\)-\(\alpha\)-transformations!

In direct hardening, the heated steel is quenched directly from the carburized state!