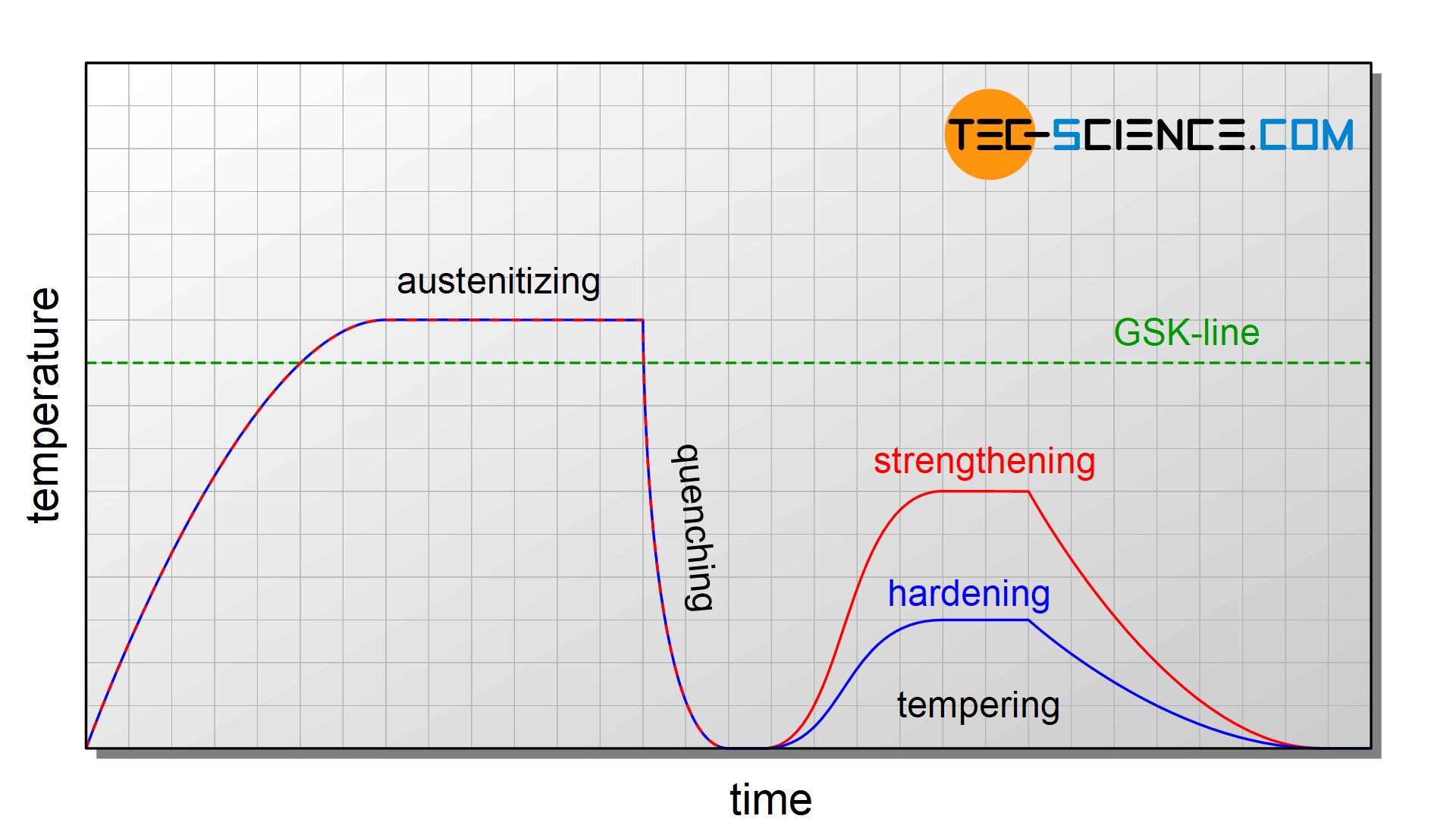 The aim of quenching and tempering is to achieve a hard and wear-resistant surface or to increase the strength of a workpiece.

The heat treatments explained in the chapter on annealing processes mainly related to the improvement of production-orientated properties such as formability, machinability, etc. In many cases, however, a high degree of hardness or strength is required.

This can be seen, for example, in a file blade for processing workpieces. To ensure that the file removes the material from the workpiece and does not become blunt itself, it must be correspondingly wear-resistant and therefore very hard. Another example where high hardness is required are gear wheels. They must be particularly wear-resistant and therefore hard at the contact points.

An application where not necessarily a very high hardness, but a high strength and at the same time good toughness values are required, is shown by the example of a crankshaft. Due to the strong motor forces, it is subject to high loads and must therefore be very strong.

In contrast to annealing processes (such as normalizing, soft annealing, coarse grain annealing, recrystallisation annealing and stress-relief annealing), quenching and tempering does not always cool down slowly but relatively quickly (quenching), so that the desired microstructural changes occur.

While the driving force for the respective microstructural change in the annealing process is always the achievement of a lower-energy state (thermodynamic equilibrium), quenching leads to a thermodynamic imbalance state of the microstructure. The rapid cooling prevents the thermodynamic equilibrium from being set. Due to these fundamental differences, the heat treatment quenching and tempering are generally listed separately from the annealing processes.

While in the annealing process the driving force for the microstructural change is the striving for a more energetically favourable state, a thermodynamic imbalance is specifically created during quenching!

In the first process step, the steel is heated above the GSK-line. This completely transforms the body-centered cubic lattice structure of ferrite into the face-centered austenite. Therefore, this process is also called austenitizing.

During austenitizing, the cementite of the pearlite disintegrates into its components and the carbon released becomes soluble in the austenite lattice. To ensure that the pearlite does not only disintegrate at the edge but also inside the material, the workpiece must be kept at a certain temperature for a longer period of time, depending on its thickness.

Austenitizing is the heating of the steel above the transformation line, so that the carbon in the face-centered cubic austenite can dissolve completely!

Thus, a slow cooling from the austenitic state would only restore the initial state of the microstructure. The desired structural change would therefore not occur. Instead, it must be cooled relatively quickly. This represents the next process step, which will be explained in the next section.

If the austenitized steel is not cooled slowly but quickly, the dissolved carbon no longer has enough time to diffuse out of the austenite lattice. Such rapid cooling is also called quenching.

Quenching is the rapid cooling of a material from the heated state!

During quenching, the carbon remains forcibly dissolved in the forming ferrite lattice despite the transformation of the lattice. The body-centered cubic elementary cells of the ferrite structure are expanded tetragonally by the carbon atoms forcibly dissolved therein. The tetragonally widened lattice structure is a new type of microstructure called martensite. Under the microscope, the martensite can be seen as a needle-shaped or plate-shaped structure (martensite plates).

The micrographs below show the microstructure of hardened steels. The needle-shaped martensite structure can be seen. The steel C45 was quenched in water after one hour of austenitisation at 820 °C.

The micrograph below also shows a martensitic microstructure of the 25CrMo4 steel.

In principle, a steel contains considerably fewer carbon atoms than unit cells. This means that not every elementary cell undergoes tetragonal expansion. This leads to a strong lattice distortion during quenching. In contrast to the ferritic-pearlitic microstructure, the distorted martensite microstructure is very hard. At the same time, however, the martensitic lattice distortion leads to an extremely strong obstruction of the dislocation movement. This greatly reduces the deformability (ductility) of the steel while increasing its strength.

However, the enormous brittleness of the martensite structure is opposed to the high hardness or strength-increasing effect after quenching. Pure martensite has no slip planes and therefore cannot be plastically deformed. Especially with hypereutectoid steels, the additional grain boundary cementite causes considerable embrittlement. For this reason overpearlitic steels are often soft annealed in advance. The steel is virtually unusable after quenching. It would hardly allow any deformation under load and would break immediately. Even an impact on a hard concrete floor could cause the quenched steel to break immediately. The condition of the steel after quenching is therefore also referred to as glass-hard.

The martensite microstructure formed after quenching is characterized by a very high hardness, but is much too brittle for most applications!

In order to give the quenched steel the toughness required for use, the microstructure must be treated again afterwards. This is done by subsequent tempering.

To give the steel back some of its toughness after quenching, it is therefore heated again. However, the temperature remains below the GSK-line, i.e. it is no longer heated beyond the transformation line into the austenite region! This reheating at relatively moderate temperatures is also known as tempering.

Tempering is the reheating of quenched steel to reduce brittleness and to increase toughness!

Due to the increased temperatures during tempering, the forcibly dissolved carbon atoms in the tetragonal martensite can partially diffuse out again. Accordingly, with the decline of the tetragonal martensite, the lattice distortion partially decreases. This reduces the hardness and strength slightly, but the steel gains significantly in toughness!

The micrograph below shows a C45 steel after one-hour tempering at 450 °C and subsequent cooling in air. The needle-shaped martensite structure is no longer as striking in comparison to the state directly after quenching (see micrograph of the hardened C45 steel above).

If the steel is to be very hard and wear-resistant, a high degree of hardness is essential. The steel is tempered accordingly at relatively low temperatures. This process is referred to as hardening. The steel is called hardened steel.

If, on the other hand, the focus is on achieving high strength with high toughness, the tempering temperatures are selected accordingly higher. This process is then just called quenching and tempering (“strengthening”).

The area under the curve as a measure of the energy absorption capacity shows that the quenched and tempered steel can absorb considerably more energy before it breaks than the hardened steel!

The area under the stress-strain curve is a measure of the energy absorption of the material!

Basically, the above-mentioned process steps result in the following necessity for the hardenability of a steel:

For some steels, the \(\gamma\)-\(\alpha\)-transformation is prevented by special alloying elements such as chromium and nickel (e.g. for stainless chrome-nickel steels). Depending on the alloying element, the steel either remains in the austenitic state up to room temperature (austenitic steels) or the austenitic phase is completely suppressed and the steel is in the ferritic state over the entire temperature range (ferritic steels). Such ferritic or austenitic steels are therefore not suitable for quenching and tempering, since the necessary \(\gamma\)-\(\alpha\)-transformation for the forced solution of carbon is missing and therefore no martensite formation can take place.

Apart from the \(\gamma\)-\(\alpha\)-transformation, the steel needs a sufficient amount of carbon. A too low carbon content would not lead to any significant formation of martensite. Although there would also be a slight increase in hardness or strength, this would not justify the relatively high processing costs. As a guideline, quenching and tempering can only be carried out economically and technically from a carbon content of approx. 0.3 %.

Only steels with a carbon content of approx. 0.3 % or more are economically suitable for quenching and tempering!

The decisive criterion for martensite formation is the obstruction of carbon diffusion during the \(\gamma\)-\(\alpha\)-transformation. This is achieved by high cooling rates. If the cooling effect is too low, martensite is not produced to a sufficient extent. Some of the carbon atoms can still diffuse out and form cementite. An intermediate microstructure is formed between that of the finely striped pearlite structure (slow cooling) and that of the martensite structure (rapid cooling). Such an intermediate microstructure is also called bainite. In general, a completely martensitic microstructure for hardening should be aimed for.

Bainite is the intermediate microstructure which occurs at insufficiently high quenching speeds and whose properties lie between those of pearlite and martensite!

In principle, the cooling effect during quenching at the surface of the workpiece is greater than inside. As a result, the critical cooling rate required inside the workpiece may no longer be achieved to form martensite. This only hardens the workpiece surface. This ist the case especially with unalloyed steels with a relatively large cross-section. Such steels, which cannot be hardened throughout the entire cross-section, are then also referred to as surface-hardening steel.

As a result, high-alloy steels generally harden over the entire cross-section compared to unalloyed steels. The concentration of the alloying elements also has an effect on the choice of quenching medium, as explained in more detail in the following section.

Influence of the alloying elements on the choice of quenching medium

As already explained, alloying elements hinder carbon diffusion and thus prevent the formation of pearlite and accordingly promote the formation of martensite. Thus, a lower critical cooling rate during quenching is required. In principle, the cooling effect should only be as high as necessary in order to achieve martensite formation; at the same time, however, it should be kept as low as possible in order to minimise the risk of quench distortion or cracking.

While the carbon content determines the later hardness or strength of the steel, the added alloying elements primarily reduce the critical cooling rate!