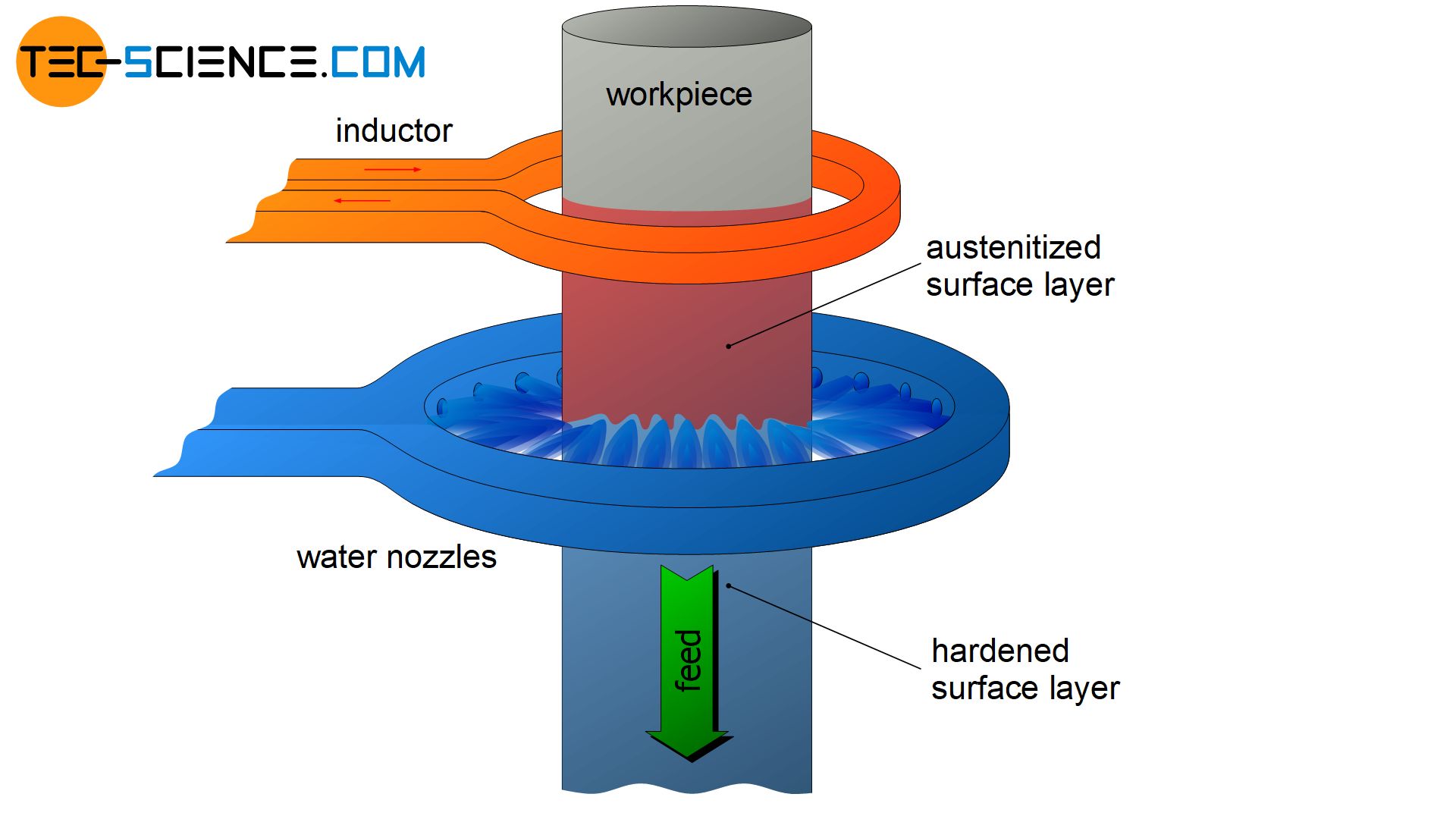 With induction hardening, the workpiece is heated by induced eddy currents. The hardening depth is controlled by the frequency of the alternating current!

The flames during flame hardening generally lead to a large heat-affected zone. With small geometries, this can lead to undesired full hardening over the entire cross-section. In order to harden even such thin-walled workpieces only on their surface in the range of a few tenths of a millimetre, so-called induction hardening can be used.

The principle of induction hardening is based on the induction effect, which is also used in induction cookers or transformers. A high-frequency alternating current is generated in a copper tool electrode (“primary coil”) which is adapted to the shape of the workpiece to be hardened. This in turn leads to a constantly changing magnetic field around the electrode, which penetrates into the adjacent workpiece and generates eddy currents due to the induction effect (“secondary coil”). These very large eddy currents of up to several thousand amperes per square millimeter lead to heating of the workpiece.

The fact that heat is mainly generated on the surface rather than inside the material is due to another physical phenomenon, the so-called skin effect. While the current density in a conductor cross-section is constant with direct current, with alternating current the current density increases with increasing frequency in the outer areas and decreases inside. The frequency of the eddy currents in the workpiece depends on the frequency of the alternating current in the electrode (also called inductor). This also results in relatively simple control of the hardening depth. The higher the frequency, the stronger the skin effect and the thinner the layers to be hardened.

With induction hardening, the workpiece is heated by induced eddy currents. The hardening depth is controlled by the frequency of the alternating current!

With induction hardening, the austenitized surface is usually quenched by means of downstream water showers, which are pulled evenly over the workpiece together with the inductor. In cases where only very low hardening depths are achieved, quenching can also take place without water by the relatively cool material core (self-quenching). Because a very high hardness can be achieved at the surface during induction hardening, high residual stresses can occur. This may require subsequent tempering at low temperatures.

The heating times are generally considerably shorter with induction hardening than with flame hardening, since a specific heating output of several kilowatts per square centimetre can be achieved, which is approx. 10 times greater. This has the advantage that the scaling is relatively low and the post-processing effort is reduced accordingly. This also significantly reduces the risk of hardening distortion.

In addition, no (toxic) exhaust gases are produced during induction hardening compared to flame hardening. Another advantage of induction hardening is the more even heating of the surface, provided the inductor is optimally adapted to the workpiece. This requires a high design tooling effort in advance so that induction hardening is economical, especially in automated production lines with high batch sizes. Due to the high electricity costs, economic efficiency increases when only small surface sizes have to be hardened on a workpiece.

Induction hardening can be easily automated and is suitable for complex geometries, especially in mass production! Scaling and hardening distortion are less than with flame hardening!