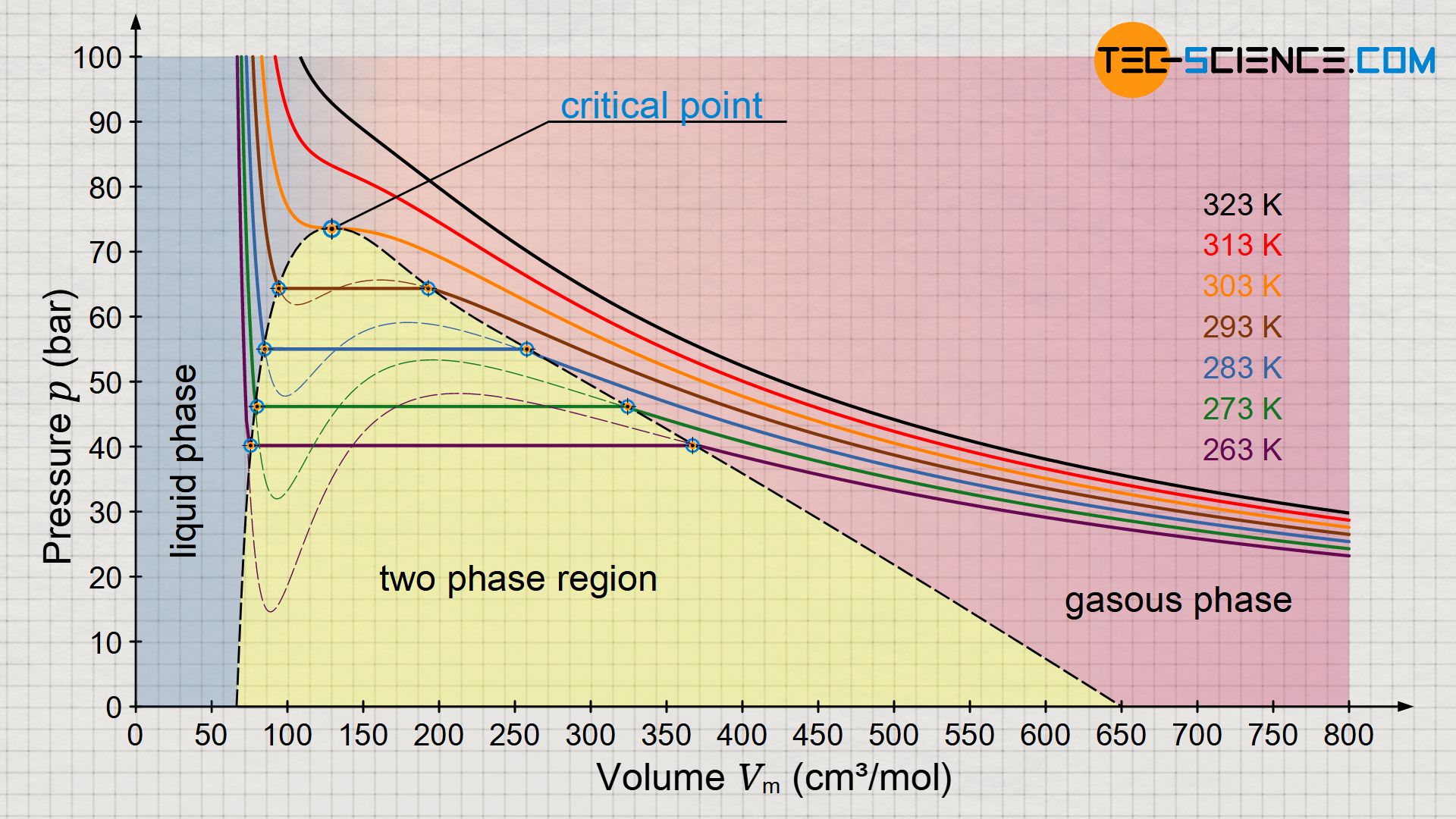 In this article, learn how the Van der Waals equation can be used to explain the liquefaction of gases at high pressures.

In this equation, “a” denotes the so-called internal pressure due to the mutual attraction of the molecules, while the excluded volume “b” takes into account the size of the gas molecules. Both quantities depend on the type of gas (see table below). The molar volume Vm is the volume occupied by the gas per unite mole (quotient of geometric volume V and amount of substance n). Rm denotes the universal gas constant and T the temperature in the unit Kelvin. More information on the Van der Waals equation and its derivation can be found in the article Van der Waals equation (gas law for real gases).

Liquefaction of gases at high pressures

The Van der Waals equations can be used not only to describe the behavior of real substances in the gas phase, but also to explain the phase transition from the gaseous state to the liquid state at high pressures. To show this, the Van der Waals equation is first rearranged so that the pressure p can be represented as a function of the volume Vm:

With further volume reduction, however, something paradoxical now happens (change of state from 2 to 3). According to the curve shown, the pressure decreases with further compression. However, experience shows that compression cannot suddenly result in a reduction in pressure. In this region from state 2 to 3, the Van der Waals equation obviously no longer reflects the correct behavior of the carbon dioxide! But below a volume of about 100 cm³, a further compression is associated with a pressure increase again, as expected. In this case, however, the pressure rises extremely sharply, as is actually only known from liquids, which are almost incompressible. And in fact, this is the liquid phase of the carbon dioxide, which has liquefied due to the high pressure.

Looking at the function in the volume-pressure diagram above, one might think that liquefaction takes place between the maximum (2) and minimum (3). However, practice shows that isothermal liquefaction takes place at constant pressure, the so-called saturation vapor pressure. So the question arises, how this horizontal line of liquefaction must run in the diagram? At this point, we refer to the article Concept of pressure-volume work, in which it was explained in detail that the area under the curve in a volume-pressure diagram has the dimension of an energy.

The figure above shows the pressure function according to the Van der Waals equation for different isotherms. According to Maxwell construction, this results in a characteristic phase diagram which describes the transition from the gaseous to the liquid state for selected temperatures (diagram below). It can be seen that above a certain temperature the Van der Waals equation no longer shows an isothermal oscillation with a maximum and minimum, but in this limiting case only a horizontal inflection point. This point is also called the critical point. Changes of state above this critical point take place without a classical phase transition!

In such supercritical processes, there is no longer any visible phase transition. While classical phase transitions are characterized by abrupt changes in physical properties such as volume, density, heat capacity, thermal conductivity, etc., supercritical states lack such features. Consequently, it is no longer possible to distinguish between liquid and gaseous states. It is a continuous transition of properties without being able to assign a typical state of matter to the substance.

Supercritical thermodynamic processes are technically used, for example, in modern steam-electric power stations, with which efficiencies of over 50 % can be realized.