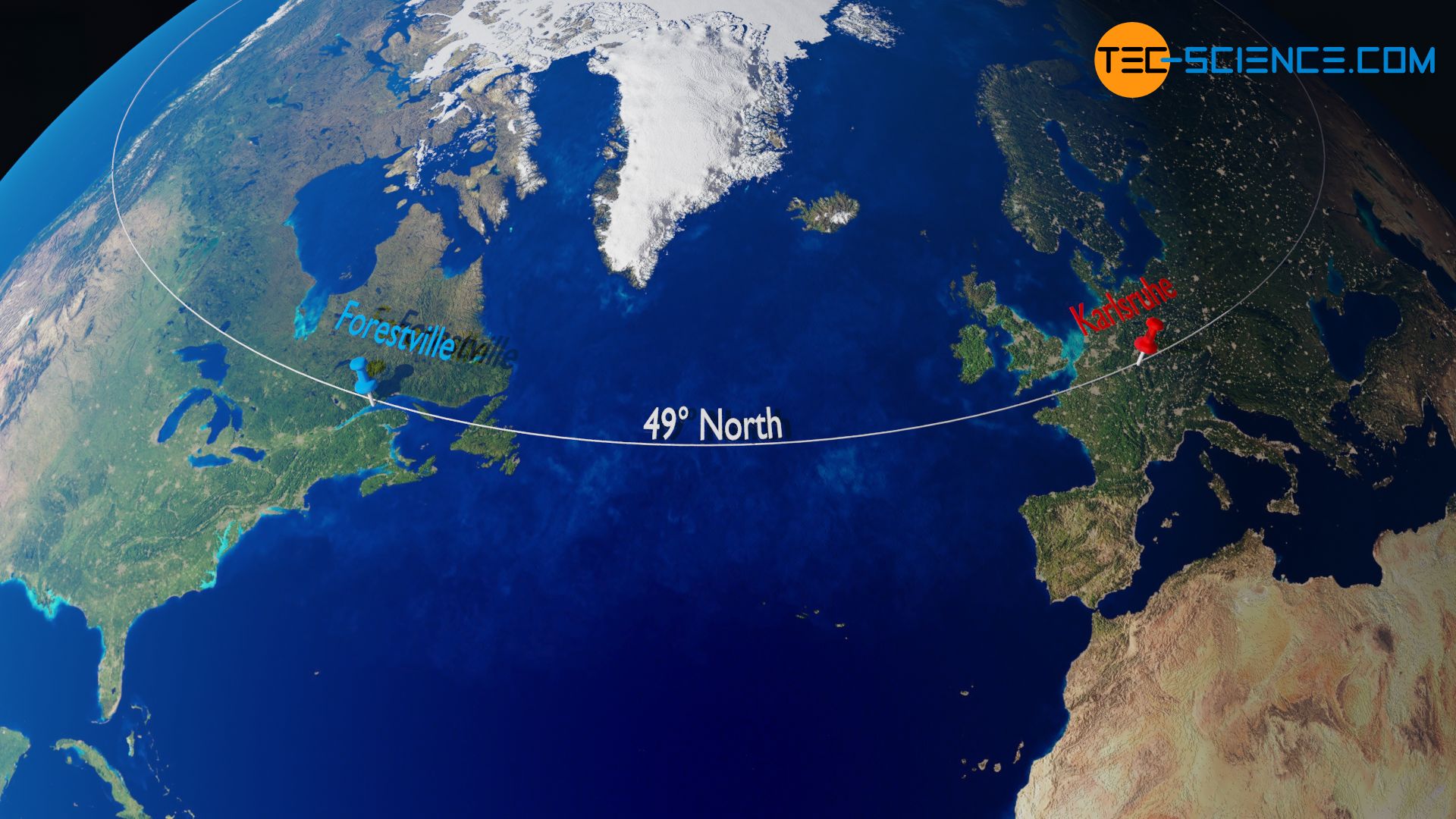 The Gulf Stream is an ocean current in the Atlantic Ocean which, as part of the earth’s global conveyor belt, has a decisive influence on the climate in Northern and Western Europe.

The world map below shows the Canadian city of Forestville and the German city of Karlsruhe. Since both cities are located on the same latitude (approx. 49° North), one might think that the climatic differences should not be very significant.

The climate in Northern and Western Europe is mainly under the influence of the so-called Gulf Stream, which is part of the ocean conveyor belt. The Gulf Stream transports around 1.5 billion megawatts of thermal energy by its warm ocean current. This corresponds to a heat output of more than half a million coal-fired power plants. Without this heat transport of the Gulf Stream, the climate in Northern and Western Europe would be much cooler, as the comparison of the cities of Forestville and Karlsruhe shows.

The ocean conveyor belt is driven, among other things, by temperature differences in the various ocean regions. Thus the water in the North Atlantic off the coasts of Europe and Greenland cools down. Due to the resulting increase in density of the cooled water, it becomes heavier and sinks towards the ocean floor. This process is also intensified by the evaporation of water on the surface. The evaporation increases the salinity at the ocean surface, which also leads to an increase in density and thus to a vertical flow of the water.

Such differences in density, which are due to differences in temperature and salinity, are ultimately the driving force for the global ocean conveyor belt. For this reason the global conveyor belt is also called thermohaline circulation (THC). The term thermohaline is composed of the word thermo (Greek for “heat”) and the word haline (Greek for “salt”).

The cold and low salty water flowing off in the North Atlantic Ocean streams close to the seabed in up to 4 km depth towards the south. This current in the deep in the Southern Ocean meets the cold Antarctic current and is then diverted eastwards towards the Indian Ocean.

In the southern area around the Southern Ocean the water of the Atlantic, Indian and Pacific Oceans meet. The water begins to mix and rises to the surface. While a part of this surface current moves further east towards the Pacific Ocean and then north, another part flows directly north into the Indian Ocean. The ocean currents finally reach the equatorial region, where the climate is hot and the water is heated accordingly.

The heated ocean current of the Pacific Ocean flows between Asia and Australia into the Indian Ocean. There the current unites with the heated water of the Indian Ocean, flowing westward. Via the ocean region around South Africa, the warm surface currents finally return to the Atlantic Ocean and from there to the Gulf of Mexico.

Between Cuba and Florida the warm ocean current (also called Florida Current) returns to the Atlantic Ocean with a speed of up to 2 m/s (!). The Florida Current and the northward flowing Antilles Current form the actual Gulf Stream.

Effects of climate change on the Gulf Stream

Thanks to the warm climate due to the Gulf Stream, palms and other tropical plants grow on the southwest coast of Ireland, that would normally not prosper in such northern regions. A disappearance of the Gulf Stream would have dramatic consequences for the climate in Europe, as predicted by some scientists for the far future and dramatically depicted in the film “The Day After Tomorrow”.

According to some scientists, climate change in particular plays a decisive role in this process. The melting of the freshwater glaciers is expected to reduce the salt content of the oceans. Due to the proximity to the North Atlantic Current, the focus is on the Greenlandic glaciers, which contain a huge amount of freshwater. The decreasing salinity in the North Atlantic region as the glaciers melt could make it more difficult for the water to sink and have a decisive influence on the global ocean conveyor belt. Whether in such a case the Gulf Stream really comes to a standstill, is not yet finally clarified.