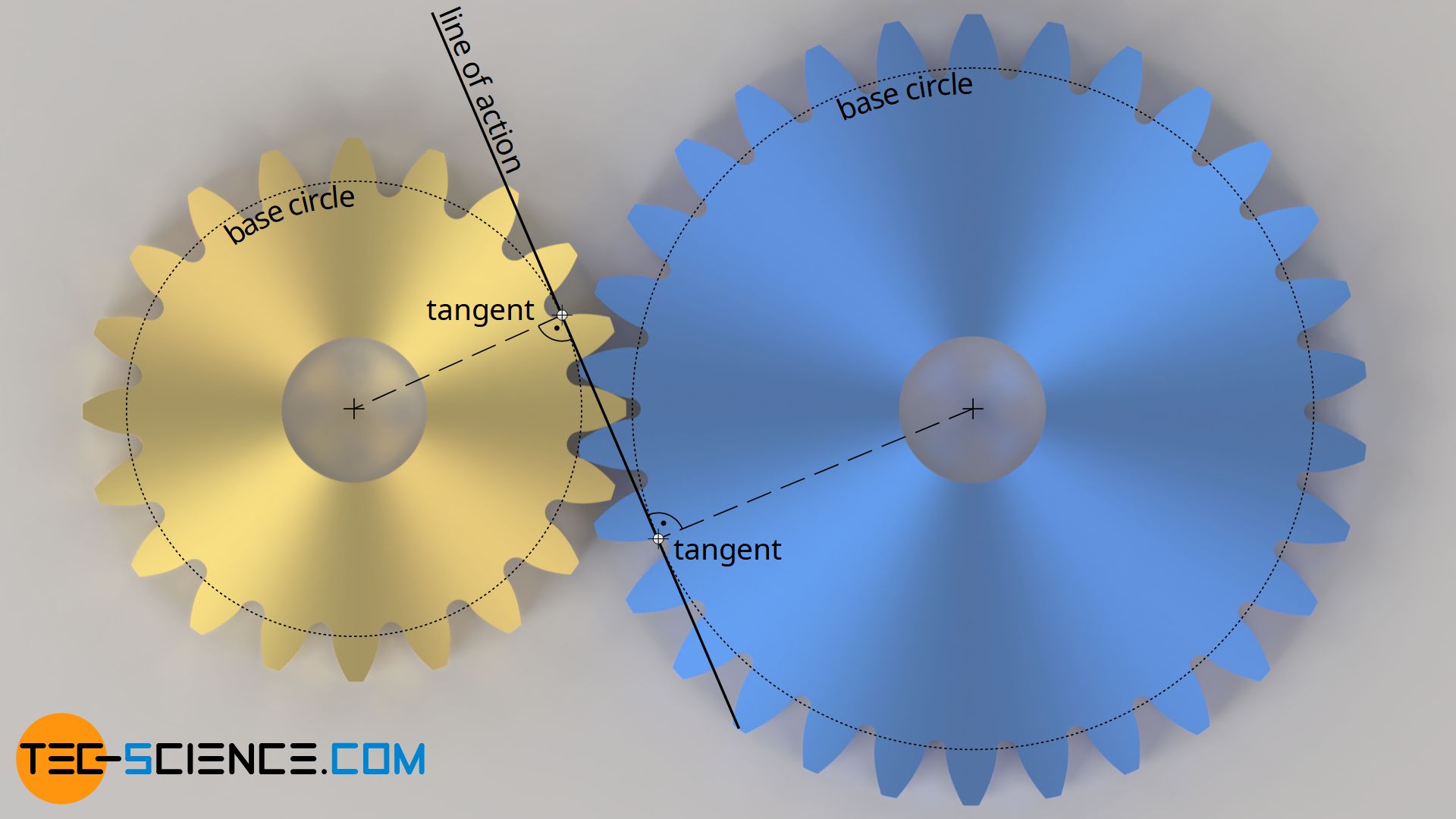 The points of contact of two meshing tooth flanks describe a straight line for involute gears (line of action or line of engagement).

The line of action corresponds to the tangent applied on the base circles of the gears.

This standardization of the pressure angle α0 is particularly important for the tool geometry in gear manufacturing, since the flank angle of the rack-shaped cutting tool (hob) depends on it. For example, a standard pressure angle of 20° means that the flanks of the hob must also be inclined by 20° to produce the tooth flanks. The tooth shape is thus decisively determined by the standard pressure angle. For more information see article Geometry of involute gears.

In order to ensure continuous power transmission between the flanks of two gears, it is important to ensure that at least one pair of teeth is always meshing with each other on the line of contact. This is not always the case if the center distances are, for example, too large and the line of contact ist thus shortened (see animation above)!

Ideally, the second pair of teeth already engages as long as the first pair of teeth has not yet left the line of contact, i.e. there are even two or more pairs of teeth in contact at the same time. Accordingly, the circumferential forces are distributed over several teeth, which means a reduction of the individual tooth loads. This reduces the risk of tooth breakage.

The distance between two adjacent contact points B1 and B2 on the line of contact l is called the base pitch pb.

The base pitch pb is the distance between two flanks on the line of contact.

The contact ratio must therefore always be greater than 1; usually in the range of 1.2 for spur gears. With a large number of teeth and a small module, the contact ratio becomes particularly large, resulting in low noise emissions!

The base pitch corresponds to the perpendicular distance between two adjacent tooth flanks of a gear!

The term “base pitch”

The base pitch corresponds to the arc-shaped distance between two adjacent flanks on the base circle!

Influence of the center distance on the transmission ratio

When two gears mesh, the direction of the force corresponds to the normal at the contact point of two tooth flanks. In the case of involute gears, this corresponds exactly to the line of action. No matter how the line of contact changes with a change of the center distance, the force therefore always remains tangential to the base circle and is therefore always perpendicular to the base circle radius.

Since the force is always perpendicular to the base circle radius even when the center distance is changed, the torque does not change. This also means that the transmission ratio of involute gears is independent of the center distance (for example, this is not the case with cycloidal gears). For this reason – and because of the relatively simple manufacturing process – involute gears are mainly used in mechanical engineering. This statement must of course be limited if the center distance becomes so large that the flanks lose contact with each other.

The transmission ratio of involute gears is independent of the center distance!

The constant transmission ratio applies not only to the torques but also to the speeds. This means that if the center distance changes, there is no change in the speed at the output wheel! Because the mechanical power results from the product of rotational speed (angular velocity) and torque. If the torque does not change when the supplied power is constant, then the speed must also remain constant. Otherwise, this would contradict the principle of energy conservation.

The tooth flanks of involute gears generally slide onto each other during meshing, only at the so-called pitch point C there is no sliding but pure rolling. This means that the circumferential speeds of both gears are identical at this pitch point. One can imagine the gears at this point as pitch cylinders that roll onto each other.

The corresponding diameters are then called operating pitch diameters. Before and after the pitch point, relative motions take place between the tooth flanks. These sliding motions are also the reason why gears generally have to be lubricated in order to minimize wear on the flanks.

The tooth flanks of the gears generally slide onto each other; pure rolling occurs only at the pitch point! The corresponding operating pitch diameters indicate the diameters of imaginary (pitch) cylinders that roll onto each other without sliding!

Calculation of the operating pitch diameter

If, for example, the tooth flanks of an involute gear differ from the ideal involute shape, the force direction of the tooth flanks can change during meshing on the line of action. This also changes the lever arm perpendicular to the force and thus the torque. This in turn leads to torque and speed fluctuations. In such a case, no constant transmission ratio is obtained.

The flank shape thus has a decisive influence on the constancy of the transmission ratio. For this reason, the first question to be asked with all tooth forms for gears is how they must be formed so that a constant transmission ratio is present during operation. The answer to this question can be reduced to the following fact:

For a constant transmission ratio, the normal at the point of contact of two tooth flanks must run at any time through the pitch point (fundamental law of gearing)!

This statement is also referred to as the fundamental law of gearing. If the direction of the force were not to run constantly through the pitch point, this would lead to a permanently changing lever arm and thus cause torque fluctuations. The transmission ratio would therefore not be constant.