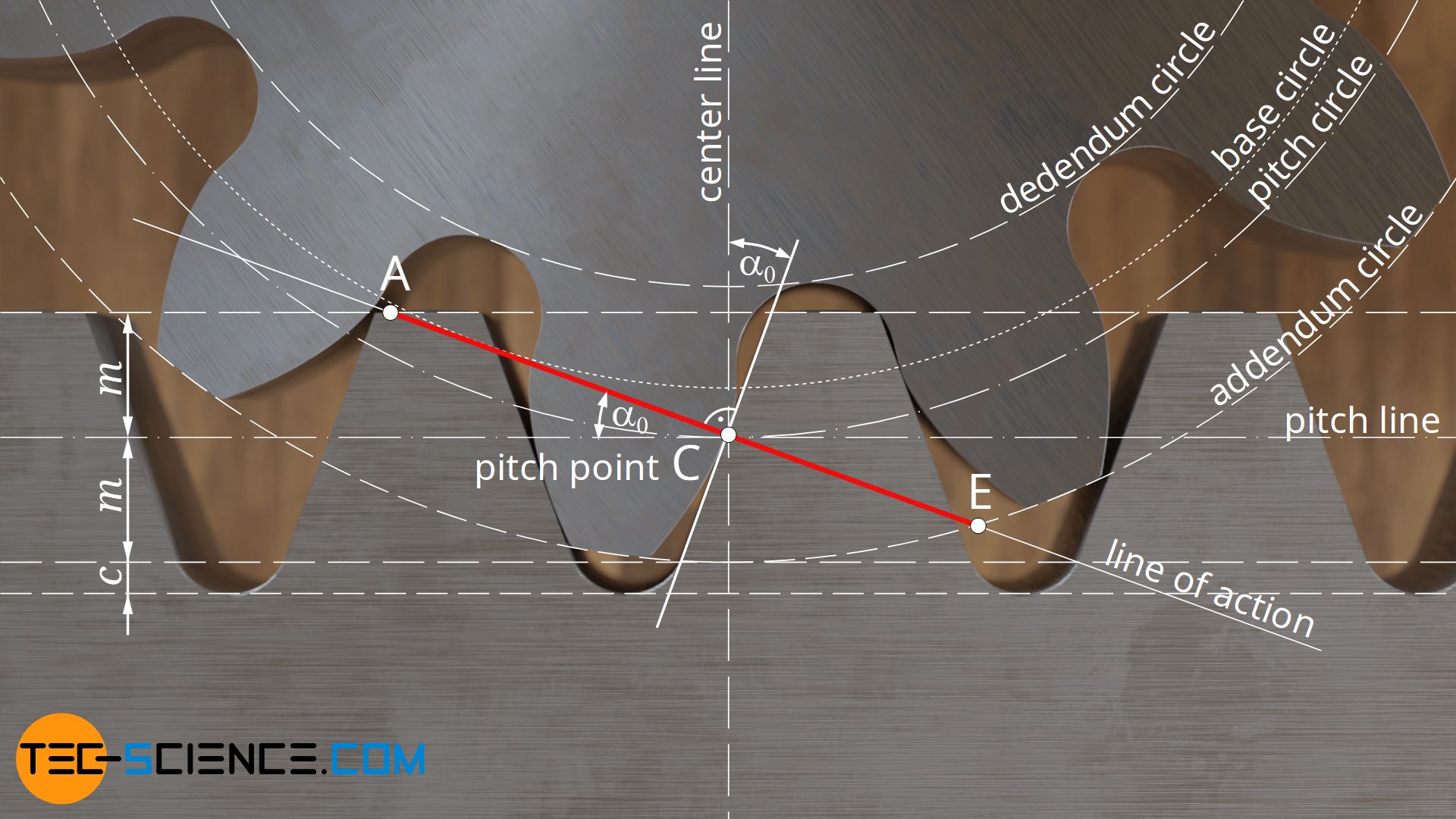 The fundamentals when two gears are meshing have already been explained in detail in the article Engaging of involute gears (meshing). In this article a special “gear” will be examined: the rack. The animation below shows the engagement of a driving gear with a driven rack.

Analogous to two gears, the pitch point C is located at the intersection between the line of action and the center line. Since such a center line always points in the radial direction of a gear and is thus always perpendicular to the “surface” of the gear, in the case of a rack it is thus perpendicular to the racks “surface”. Thus the pitch point C is also cleary defined.

With backlash-free meshing, the rack sits firmly with both flanks on the tooth flanks of the gear. Shifting the rack in radial direction does not change the position of the line of action, which is always the flank normal of the rack and the tangent of the gear’s base circle. Neither the base circle nor the flank angle change in this case, so that the line of action remains identical. This also does not result in any changes in the position of the pitch point, since the center line is also retained! The only effect of a distance change is on the length of the line of contact, which is shortened by a radial displacement of the rack away from the gear.

The position of the pitch point always remains constant with racks! The line of contact is shortened if the distance between rack and gear is increased!

The unchangeable position of the pitch point is also immediately apparent from its definition. The pitch point is defined as the point at which the circumferential speeds of both “gears” are identical. In the case of the rack, however, it is a translatory motion. Each point on the rack thus always moves at the same speed, regardless of the distance to the gear. This also does not change the pitch circle on the gear whose points move at the same speed as the rack. The pitch circle remains identical and so does the pitch point!

As explained in the section before, the pitch point is independent of the distance between gear and rack! The pitch line of the rack and the pitch circle of the gear (both of which run through the pitch point) do not change either! This fact plays a special role especially when manufacturing gears with the help of rack-shaped tools (hob cutters). This means that even in the case of so-called profile shifts (which are equivalent to the radial displacement of the rack), identical pitch circles always occur on a gear. These are then also referred to as manufacturing pitch circles.

In contrast to a gear, rack-shaped tools (or racks) have identical tooth spacings p0 at every point. In the case of gear, however, these tooth spacings depend on the circumference of the circle under consideration. With increasing diameter, which is considered, the teeth are also distributed on an ever larger circumference and the tooth distance consequently increases. Only where the teeth of the rack-shaped tool (or rack) “roll” directly on the gear are identical tooth spacings found (circumferential pitches or circular pitches p0). By definition, this corresponds to the manufacturing pitch circles.

The always identical circular pitches on the manufacturing pitch circles make it possible not only to pair “normal” gears with profile-shifted gears, but also to combine gears of any size, i.e. any number of teeth, if these were manufactured with the same rack-shaped tool!