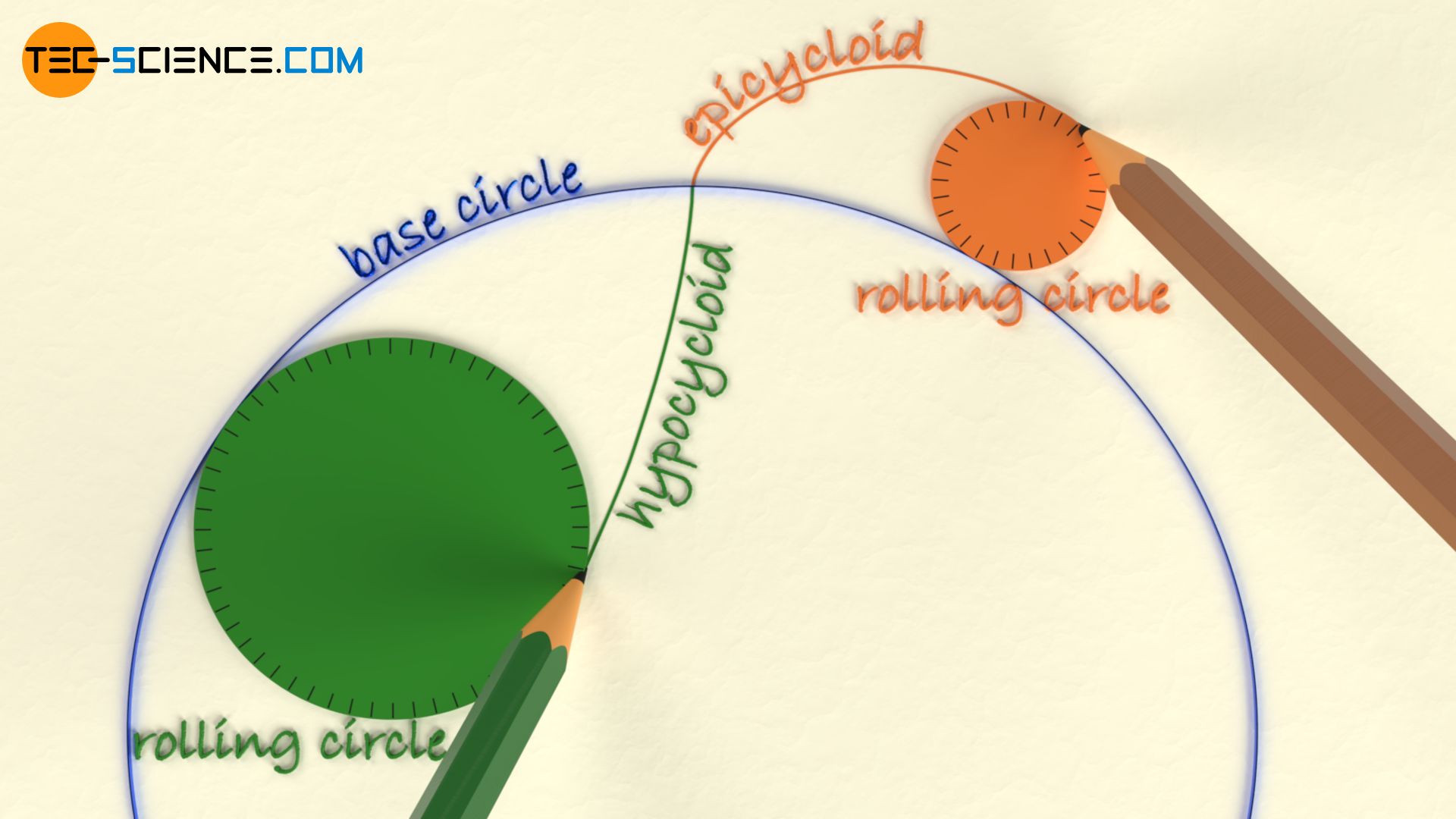 The shape of the flank of a cycloidal gear corresponds to a cycloid constructed by rolling a rolling circle on a base circle.

Construction of a cycloid

Since a rolling circle is always used to construct the tooth shape of two gears to be mated, cycloidal gears are always specially matched to each other. A cycloidal gear cannot be replaced easily by a gear with a different number of teeth as is the case with involute gears. Such a interchangeability of gears with cycloidal toothing is only possible if the rolling circles are always chosen identically and are only related to the base circle of the “main gear”.

Cycloidal gears must always be specially matched to each other and can generally not be exchanged at will!

The base circle of a cycloidal gear corresponds to the pitch circle!

The addendum diameter da (tip diameter) of a cycloidal gear can also be determined analogously to an involute gear:

Special case of a hypocycloid: a straight line

A special case in the tooth form of cycloidal gears arises when the rolling circle corresponds to half the base circle. In this case, straight foot flanks are obtained which extend radially outwards. Such a toothing is also called “clock toothing“, since it was often found in clockworks in the past (nowadays, however, the circular arc toothing is mostly used).

Straight dedendum flanks are obtained if the rolling circle diameter for the construction of the hypocycloid corresponds to half the base circle diameter!

Note that a hypocycloid can only be constructed if the rolling circle diameter is smaller or, in extreme cases, equal to the base circle of the gear (in such an extreme case one also speaks of a point tooth form). Otherwise no rolling can take place on the inside of the base circle! However, this restriction does not apply to the construction of an epicycloid; in this case, rolling circles of any size can be used. An important special case will be discussed in more detail in the next section.

Special case of an epicycloid: an involute

An important special case of an epicycloid is obtained when the outer rolling circle is made larger and larger. In extreme cases, the result is a circle with an infinitely large diameter, which corresponds to a rolling straight line due to the infinitely small curvature. The resulting epicycloid is then called an involute and the toothing is correspondingly called an involute toothing.

Involute toothing is a special case of cycloidal toothing with a rolling circle of infinite diameter.

Pros and cons of cycloidal gears

The cycloidal shape of a tooth leads to less wear of the tooth flanks during meshing and thus to lower friction losses in comparison to the involute shape. The reason for this is the lower contact pressure (lower hertzian contact stress), since a convex and a concave flank always meet in mesh and “nestle” up against each other, so to speak.

Furthermore, cycloidal gears can be produced with a significantly lower number of teeth without undercutting compared to involute gears. In this way, gears with only three or even two teeth can theoretically be produced.

The lower friction and the low number of minimum teeth are the main reasons why cycloidal gears are/were often found in clocks.

Despite the mentioned advantages of cycloidal gears, involute gears are still the most commonly used type of gears in mechanical engineering! The reason is the relatively simple production of an involute shape (straight tool flanks) compared to a cycloidal shape (curved tool flanks).

Furthermore, cycloidal gears are very sensitive to an inaccurate adjustment of the centre distance, which then leads to a change in the transmission ratio. For these reasons, cycloidal gears are hardly found in mechanical engineering but are only used in special cases such as in the watch industry, for roots type blowers or for the drive of gear racks. 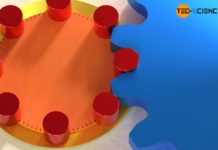 Lantern pinion as a special case of cycloidal gear 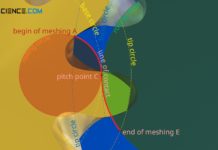 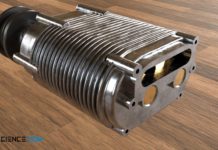