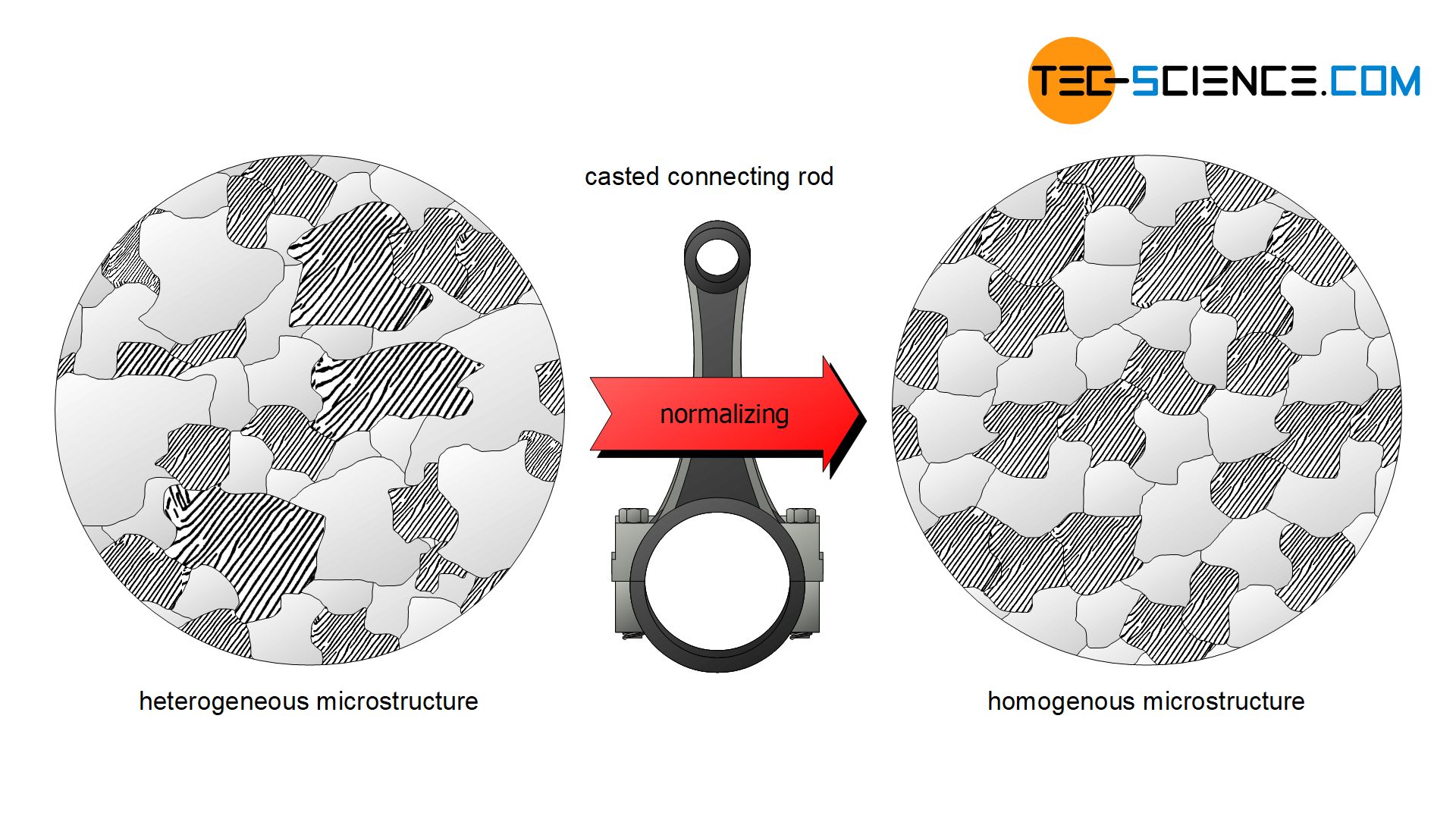 The aim of normalizing is to achieve a uniform homogeneous microstructure with reproducible properties!

As already explained in the chapter deformability of metals, fine roundish grains generally lead to better toughness and strength values compared to large grains. A uniform microstructure is desirable, which has similarly small grains over the entire microstructure. This is the only way to ensure that the material meets the strength requirements at every point to the same extent.

However, achieving a homogeneous microstructure already during solidification requires high demands, since the solidification conditions will not be identical across the entire melt. For example, cast steel may cool faster at the contact points to the mould wall than inside the melt. While finer grains will develop in the edge areas due to the stronger undercooling, larger grains will form in the middle of the melt.

A heterogeneous grain microstructure can also occur during forging, as the grain boundaries shift due to diffusion processes and the grains can unite. This results in a new grain formation with the consequence of a heterogeneous structure. The same effect of heterogeneity can also be seen in welded workpieces in the area of the joint.

For this reason it is necessary to standardize (homogenize) a non-uniform microstructure by means of a heat treatment. This gives the steel its “normal” properties, which are always reproducible. For this reason, the targeted homogenization of a steel microstructure is also called normalizing.

The aim of normalizing is to achieve a uniform homogeneous microstructure with reproducible properties!

During normalizing, the steel is heated to just above the GSK-line so that the pearlite is completely converted to austenite. The austenitized steel is then slowly cooled in air. Since the grains form anew during the \(\gamma\)-\(\alpha\)-transformation, grain refinement occurs and makes the microstructure homogeneous.

The temperature during normalizing should not exceed approx. 30 °C above the GSK-line, otherwise there is a risk of coarse grain formation. The reason for this is that, from an energy point of view, large roundish grains are more favourable than many small ones. Therefore, the microstructure always strives to form a single large grain. This requires, among other things, diffusion processes which are favoured by higher temperatures. Therefore, it is important to keep the temperature as low as possible during normalizing in order to avoid the formation of coarse grains. For this reason, hypereutectoid steels are not completely heated up to the austenite region (above the SE-line).

Normalizing is preferably used for hypoeutectoid steels whose microstructure has been negatively influenced by manufacturing processes such as forging, rolling, casting, welding, etc. During rolling, normalizing can already be carried out during the rolling process (normalizing rolling). A normalized microstructure is generally characterized by very good toughness and strength values due to its homogeneous, fine structure.

Normalizing is often carried out on hypoeutectoid steels after forging, rolling, casting or welding!