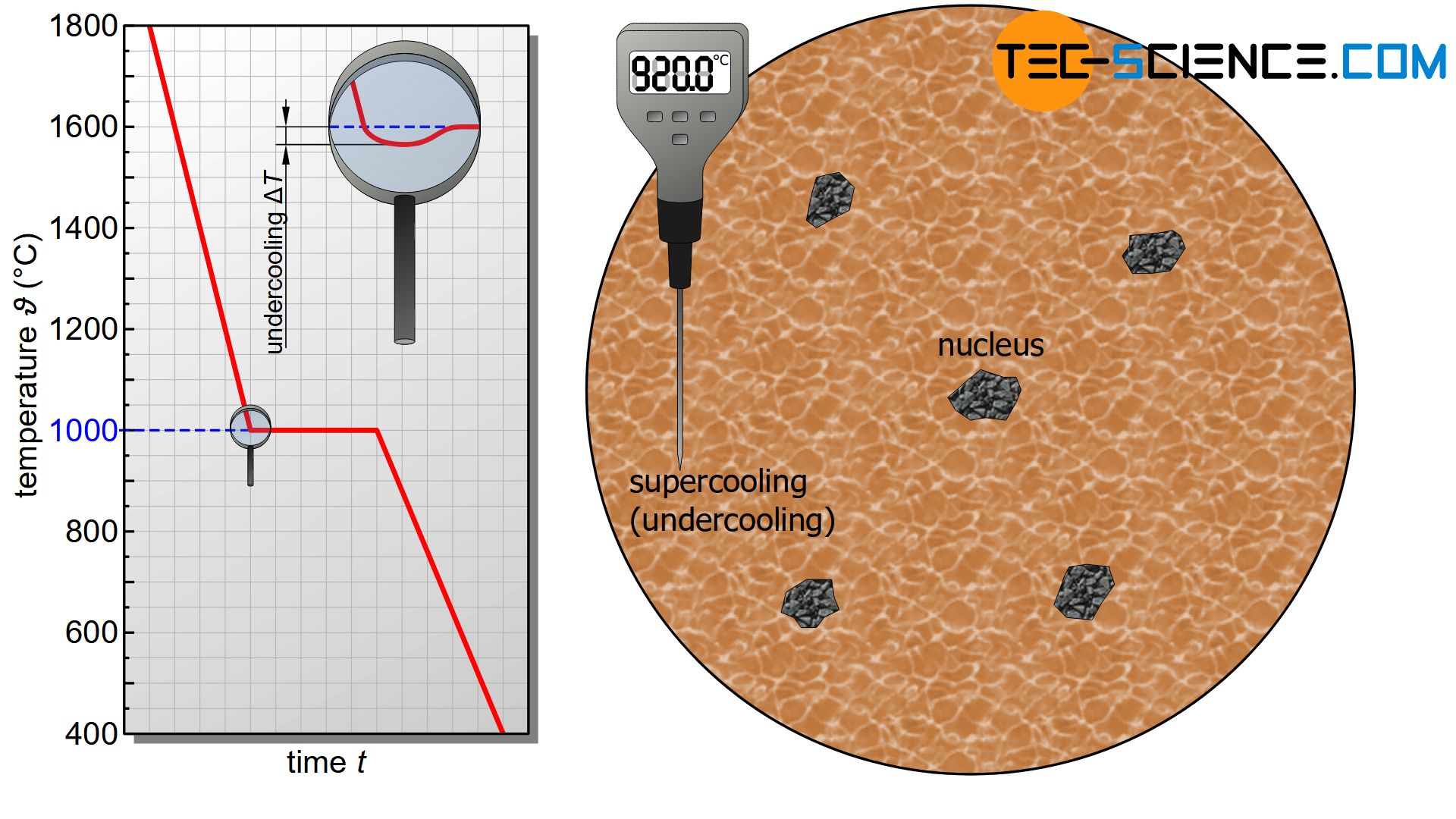 Two conditions must be met for solidification: The melt must be supercooled and nuclei must be present in the melt.

The origin for the formation of a microstructure is usually the molten state. The metal is then cast and solidified. During this process the microstructure finally forms. The processes involved are explained in more detail below.

In the liquid state, the metal atoms are distributed completely randomly. Due to the high temperature, the particles have a relatively high kinetic energy. In this state, the force of attraction between the atoms is not sufficient to permanently bind them together. Due to the violent impact processes with other atoms, possibly short-term existing bonds are immediately broken up again.

If the melt is now gradually cooled, the kinetic energy of the particles also decreases as the temperature drops. If the temperature falls below a critical value, the mutual attraction between the particles gets the upper hand. Bonds between atoms can now become permanently effective. The solidification temperature (“melting point”) has been undercut and the microstructure will be formed.

Due to the forces of attraction that become effective, more and more particles from the melt attach to the already solidified lattice structure. This process continues until all particles have finally adhered to the metal lattice. Since the crystal structure of the metal forms during this solidification process, this is also referred to as the crystallization process.

The solidification process of a crystalline structure is also called crystallization!

In order to trigger a solidification process, the melt must be supercooled (undercooled)!

Although supercoolung is a necessary condition for the solidification process, it alone will not cause a melt to solidify! The second necessary prerequisite is explained in more detail in the following section.

Although the undercooling described in the previous chapter is a necessary condition for the solidification process, it alone is not enough to cause a melt to solidify! This may sound a little strange at first; a simple everyday example will illustrate this in the following.

With the help of a hand warmer it quickly becomes clear that a mere supercooling of a melt (liquid) alone is not sufficient to trigger a solidification process! The liquid used in hand warmers is often sodium acetate trihydrate, the solidification temperature of which is around 58 °C.

However, even at temperatures down to -20 °C, this liquid state of sodium acetate trihydrate remains. In this case, even with supercooling of up to 78 °C, the melt cannot be induced to solidify. This state is also referred to as supercooled melt or undercooled melt.

Obviously, in addition to supercooling, another necessary prerequisite must also be fulfilled for a melt to solidify. This further condition can be seen very clearly from the hand warmer. Because if a metal plate inside is pressed, the solidification process suddenly begins.

The reason for the solidification is the tiny unmelted residues of the sodium acetate trihydrate (or other impurities), which have settled in the fine grooves of the metal platelet. Only when the platelet is pressed the melt come into contact with the unmelted residues oder other impurities. These act as so-called nuclei from which solidification can begin.

Note: Until today it is not exactly clear whether exactly this principle actually triggers solidification in a hand warmer. What is certain, however, is that solidification makes nuclei absolutely necessary in order to trigger a crystallization process.

The presence of nuclei is therefore another condition to be met when a solidification process wants to be triggered.

There must be nuclei in the melt to trigger a crystallization process!

Incidentally, the formation of a grain can be vividly reproduced with the hand warmer. Starting from the nucleus, more and more particles from the melt accumulate around this nucleus and crystallization gradually progresses. Once the melt is consumed, the crystallite hits the surrounding shell, just as the grain in a metal hits its neighboring grains after solidification.

It can be concluded that even in the presence of nuclei, solidification does not occur as long as there is no supercooling (the metal plate of a hand warmer can be pressed as often as it is needed above the melting temperature – the melt remains liquid).

Conversely, the solidification process is not triggered even if no nuclei are present in the melt despite supercooling (despite severe undercooling, the hand warmer remains liquid as long as there is no nucleus in the melt).

The stated solidification temperatures are ultimately theoretical values above which any self-generated nuclei dissolve immediately. The solidification process is therefore not triggered in such cases.

Only below the solidification temperature is a nucleus capable of growth and crystallization can begin!

Transferred to the microstructure of metals, supercooling and nuclei are therefore always a prerequisite for solidification. However, nuclei do not always have to be unmelted residues of the liquid as in the case of the hand warmer. Nuclei usually develop in other ways, especially in molten metals. This is discussed in more detail in a separate article.

Water can also be put into a supercooled state of well below -10 °C and still be liquid! However, this requires highly pure water without any impurities that could serve as solidifying nuclei. Of course, the vessel within which the water is stored must also be free of impurities.

However, as soon as the water comes into contact with other particles (for example when pouring onto a table) the nucleation is triggered and the water begins to solidify immediately. Even the smallest vibrations can trigger the solidification process as well.

In nature supercooled water plays a important role in so-called freezing rain. These are subcooled raindrops. These initially rain in liquid form onto the ground. On impact, however, the impurities there serve as crystallization nuclei. The raindrops immediately begins to crystallize (solidify) and thus turns to ice! 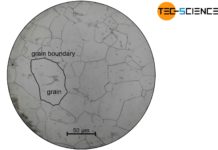 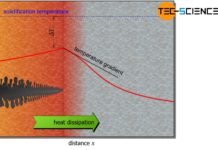