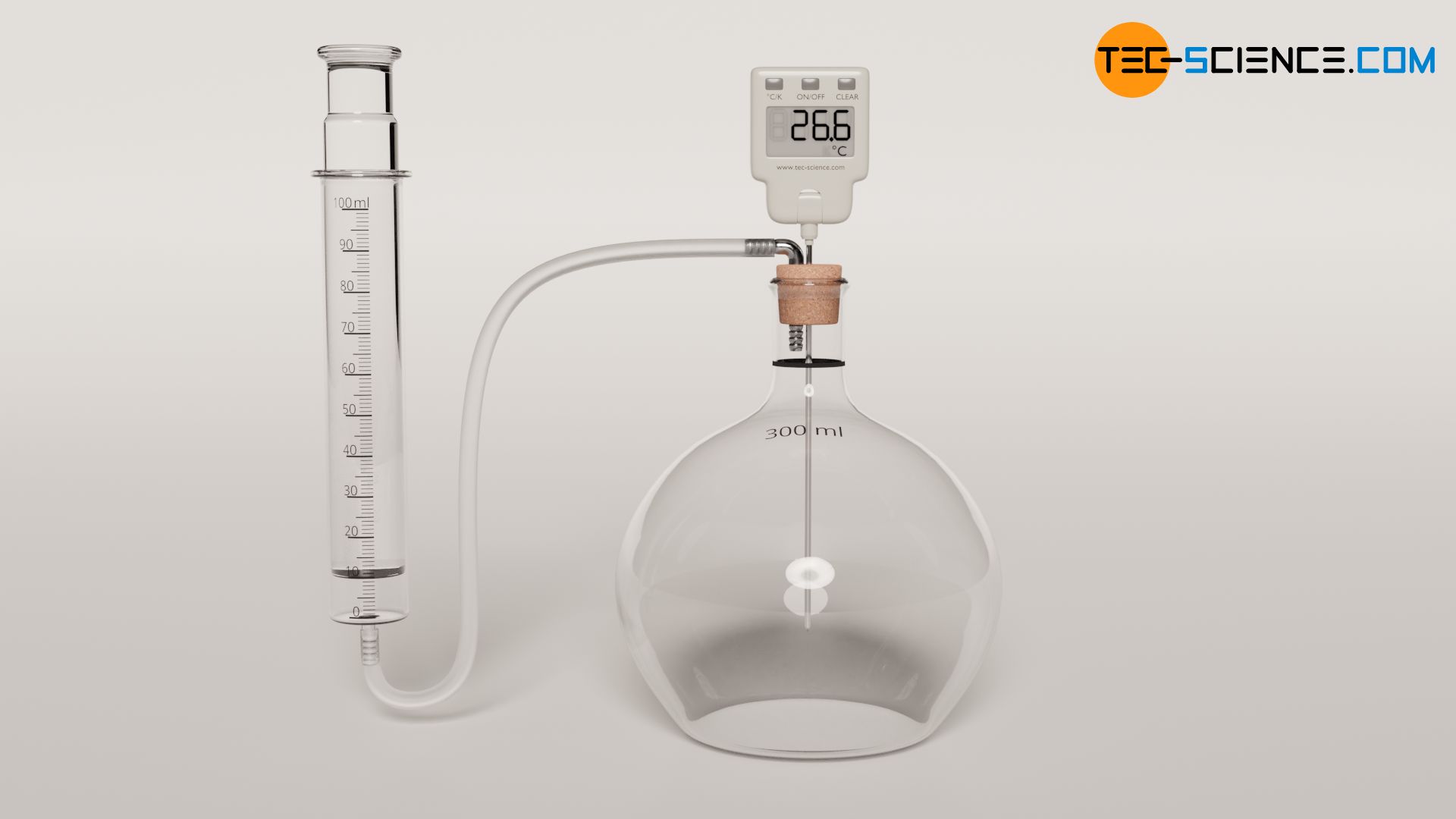 The law of Gay-Lussac describes the relationship between an increase in temperature and the resulting increase in volume at constant pressure (isobaric process).

If a thermodynamic process takes place at constant pressure, it is called an isobaric process. For example, such an isobaric change of state is observed when a gas is confined to a cylinder that is closed with a piston. The piston moves frictionless in the cylinder. When the gas is heated, it expands at constant pressure and the volume increases. The exact mathematical relationship between gas volume and gas temperature for an isobaric process in a closed system is explained in more detail in this article.

In principle, the setup described above with a cylinder and a piston is used to investigate the relationship between temperature and volume. The cylinder is connected by a hose to a larger vessel to increase the gas volume. This increases the accuracy of the measurement, because more gas can expand, resulting in a larger change in volume. In the simplest case, air is used, which can be considered as an ideal gas. A scale is attached to the cylinder from which the volume change can be read. The total volume results from the sum of the vessel volume, cylinder volume and volume of the hose.

If the air is now heated, it expands against the ambient pressure and pushes the piston upwards. On the one hand, at a constant volume the pressure would increase due to the increase in temperature (law of Amontons). On the other hand, at constant temperature, the pressure would decrease due to the increase in volume (law of Boyle-Mariotte). Both effects cancel each other out, so to speak, if the volume of the gas can expand freely. Overall, there is therefore no change in pressure in the present case. The expanding gas gives way to the pressure increase permanently, so to speak. It is the ambient air pressure and the weight of the piston that forces the gas to maintain its constant pressure. The thermodynamic process is therefore isobaric.

The air in the vessel is heated by a water bath. Measurement uncertainties arise at this point due to the uneven heating, since only the air in the vessel is heated, but not in the hose and cylinder. In order to keep the measurement uncertainty as small as possible, the volume in the hose and in the cylinder should be kept as small as possible. Alternatively, the entire measuring apparatus can be placed in a water bath. In this way, the dependence of the gas volume on the temperature at constant pressure can be investigated.

As already mentioned, during the experiment one already notices that the volume increases as the temperature rises. For a more precise analysis it is useful to plot the measured values in a diagram. For this purpose, the volume is plotted against the temperature (unit: °C).

The diagram shows that volume increases linearly with temperature. However, in this form there is no proportionality between the two quantities! Proportionality means that an increase of the one quantity causes an increase of the other quantity to the same extent. A doubling of the temperature should therefore also result in a doubling of the volume.

Absolute zero is defined by the fact that the molecules no longer move. The molecules gather in a singularity, so to speak, and the gas no longer has any volume (note that the particles of ideal gases are regarded as mass points and therefore have no volume). The gas volume is therefore zero at absolute zero. Therefore this point became the reference point of the Kelvin scale (0 K = -273 °C).

Starting from absolute zero, the volume of a gas increases proportionally with temperature only if the unit Kelvin is used. Note that a proportional relationship between two quantities is only given if the straight line in the diagram runs through the origin.

If, in the case of a proportional relationship between two quantities, one quantity increases to the same extent as the other quantity, then the quotient of both quantities is in any case constant. This statement can be verified using the values obtained from the experiment. For an isobaric process, the quotient of volume and temperature is therefore always constant in any state of the gas:

The constancy of the quotient of volume and temperature of an isobaric process was experimentally investigated by the physicist Joseph Louis Gay-Lussac. Therefore, this law is also known as Gay-Lussac’s law (also referred to as second law of Gay-Lussac) or Charles’s law.

Gay-Lussac’s law states that for an isobaric process of a closed system, the quotient of volume and temperature is constant!

Linking two states of a gas

For an isobaric process of a closed system, two states of an ideal gas are linked by the quotient of volume and temperature!

Connection to the ideal gas law

The relationship between two gas states shown above also results from the ideal gas law for the special case of a change of state at constant pressure (p1=p2):

The constancy of the quotient of pressure and temperature can also be derived directly from the ideal gas law. In the case that the pressure does not change (p=constant and the system is closed (m=constant) the following statement applies: