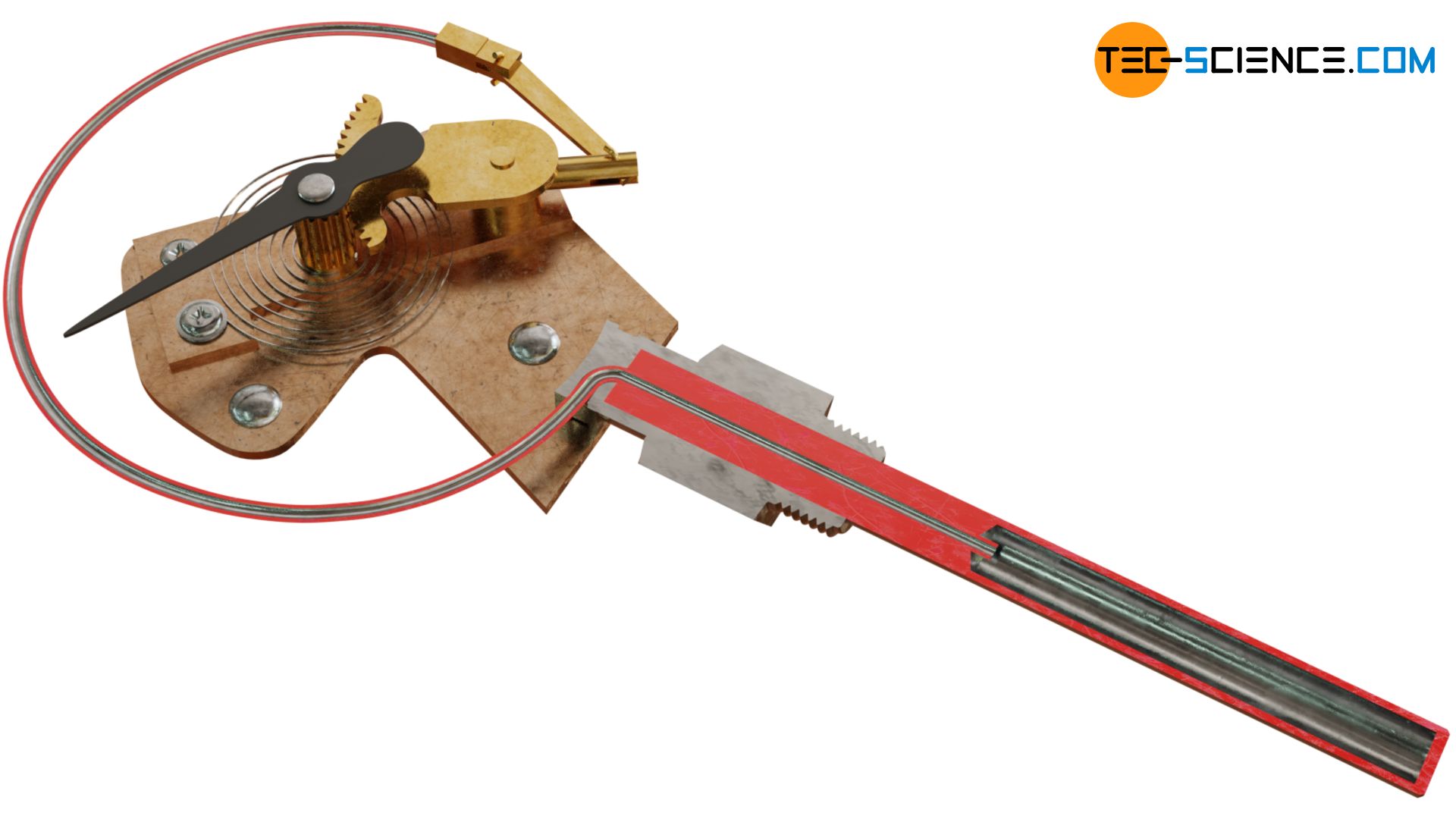 In gas thermometers, the pressure rise connected with a temperature increase is used for measuring the temperature!

In gas filled temperature gauges (also called gas thermometers or gas-in-metal thermometers), a gas is used as the thermometric fluid instead of an liquid as it is in liquid-in-metal thermometers. However, the operating principle is the same in both cases: It is not the expansion of the fluid that is measured, but the increase in pressure at a constant volume which is associated by an increase in temperature. For an ideal gas, the gas pressure at a constant volume is determined only by the temperature (isochoric process).

In gas thermometers, the pressure rise connected with a temperature increase is used for measuring the temperature!

The figure below shows the operating principle of a gas filled thermometer where the pressure measurement is based on the use of a Bourdon tube. In principle, this is a C-shaped bent tube in which an inert gas such as nitrogen, helium or argon is under high pressure. The Bourdon tube is connectet to a bulb as the actual measuring probe. The entire system is sealed gas-tight on all sides.

If the bulb and the gas inside it are heated, the pressure increases because the gas cannot expand (the relatively small thermal expansion of the tube can be neglected). The Bourdon tube bends like a spring due to increasing pressure. This elastic deformation due to the increase in pressure serves as a measure of the temperature and can be read off a calibrated scale.

In order to increase the measuring sensitivity, the relative small deformation of the tube during pressure rise is not directly output on a scale but is first amplified by a lever mechanism with rack and pinion.

To stabilize the pointer due to the backlash between rack and pinion, a hair spring is connected to the shaft of the pinion. Otherwise you would read slightly different temperatures depending on whether the temperature rises or falls, because the pinion contacts different tooth flanks of the rack.

Gas filled thermometers can also be equipped with a flexible capillary tube for covering large distances. In the case of large heights to be covered, the relatively large overpressure in the measuring system minimizes the influence of the hydrostatic pressure on the measurement result.

Note: Pressure gauges operate according to the same principle as the gas thermometer. Instead of a closed measuring tube, an open tube is used, which is placed directly into the fluid whose pressure is to be measured. Instead of temperature values, pressure values are read off the scale.