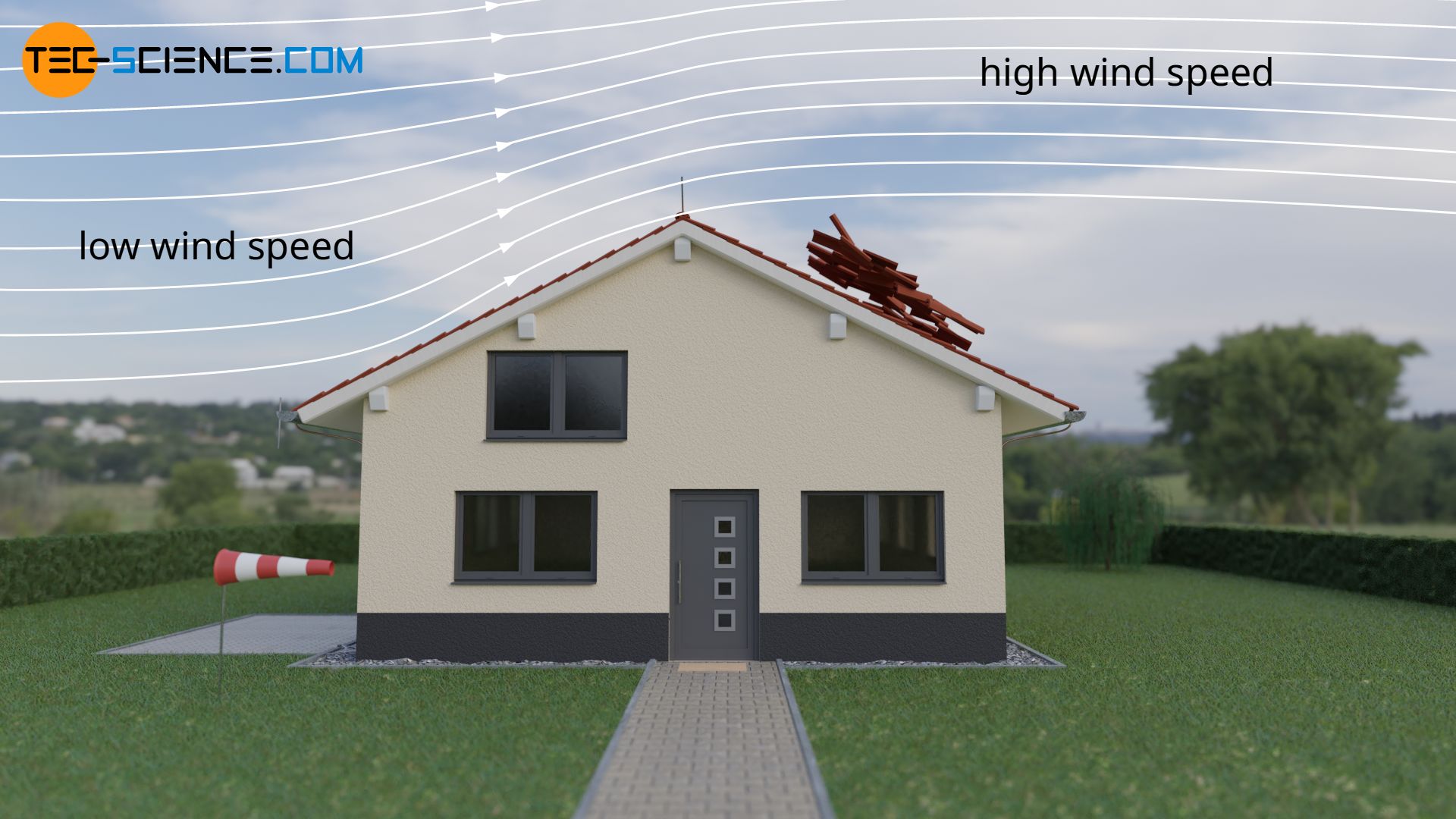 Learn more about examples and technical applications of the Venturi effect in this article.

The Venturi effect (Bernoulli effect) refers to the decrease in pressure in flowing gases or liquids with increasing flow velocity. In the article Venturi effect, this phenomenon have already been discussed in detail. The present article therefore deals with examples and technical applications of the Venturi effect.

The decrease in pressure in flowing fluids can be verified relatively easily with a sheet of paper. To do this, hold a sheet of paper at the corners with two fingers and bring it to the lower lip. Now blow with your mouth over the top of the sheet. The paper sheet is not pushed down, but lifted up. Due to the fast flowing air on the top side of the sheet, the pressure decreases and the higher pressure on the bottom side (resting air) pushes the sheet of paper upwards.

Slamming of doors by a draft

The slamming of doors due to a draft, is also due to the Venturi effect. The door gap is a constricted cross-section through which the air flows very quickly. The air pressure in the gap between the door and the frame drops. Around the door leaf, the air usually flows at a much lower speed. The higher pressure on the door leaf compared to the air pressure in the gap, therefore slams the door with great force, even if the air stream flows with the opening direction of the door!

Ripping off roofs by storms

The Venturi effect can also be seen in storms. During extreme storms, entire roofs are often ripped off. This is also a consequence of the decreasing pressure with increasing flow speeds. Due to the high wind speeds, the pressure in the surrounding area and thus also above the roof decreases very strongly. Inside the building, the air is usually at rest and has a higher pressure. The higher pressure inside the building pushes the roof up, so that the wind gets under the roof and finally rips it off.

Paradoxically, the lee side of the building facing away from the wind is usually exposed to greater danger, as the wind speeds are higher and the pressure is lower (greater suction effect). In this case, the house serves as a constriction for the flow, so that the airflow is accelerated as it flows over the house. Very high flow velocities therefore are present directly behind the ridge.

Water nozzle at the bottom of a bucket

The Venturi effect can also be experienced when filling a bucket with a water nozzle. If you press the water nozzle on the bottom of the bucket, the nozzle literally sucks itself to the bottom. This is because the water flows very quickly due to the small gap between the bottom and the nozzle. The pressure decreases and the higher surrounding water pressure pushes the nozzle to the ground.

The suction effect of fast flowing gases is also used, for example, to suck liquids out of a reservoir and atomize them. With the help of a venturi nozzle, an air flow is accelerated so that the static pressure in the narrowed cross-section decreases. This creates a negative pressure which sucks liquid through another opening.

This is how carburetors of combustion engines work, for example, which suck fuel from a reservoir and mix it with the air flow. The same principle is used in maintenance units of pneumatic systems, which atomize oils and mix them with air.

Instead of sucking liquids from a reservoir like a carburetor, air can also be sucked in. This creates a negative pressure inside the reservoir. This principle is used in suction cups to create a vacuum.

Decanter of a wine bottle

The aromas of wine develop best when oxygen is added to the wine. This is achieved with a so-called decanter, which is placed on the wine bottle before pouring. The cross-section of the spout narrows and leads to an increase in the outflow velocity. The resulting negative pressure draws in air from the environment and adds it to the wine as it is poured out of the bottle.

This effect of air being sucked into a flowing liquid is also the reason why air accumulates over time in heating systems. Heating valves are ultimately constrictions for the water flow. The resulting negative pressure sucks air through fine leaks.