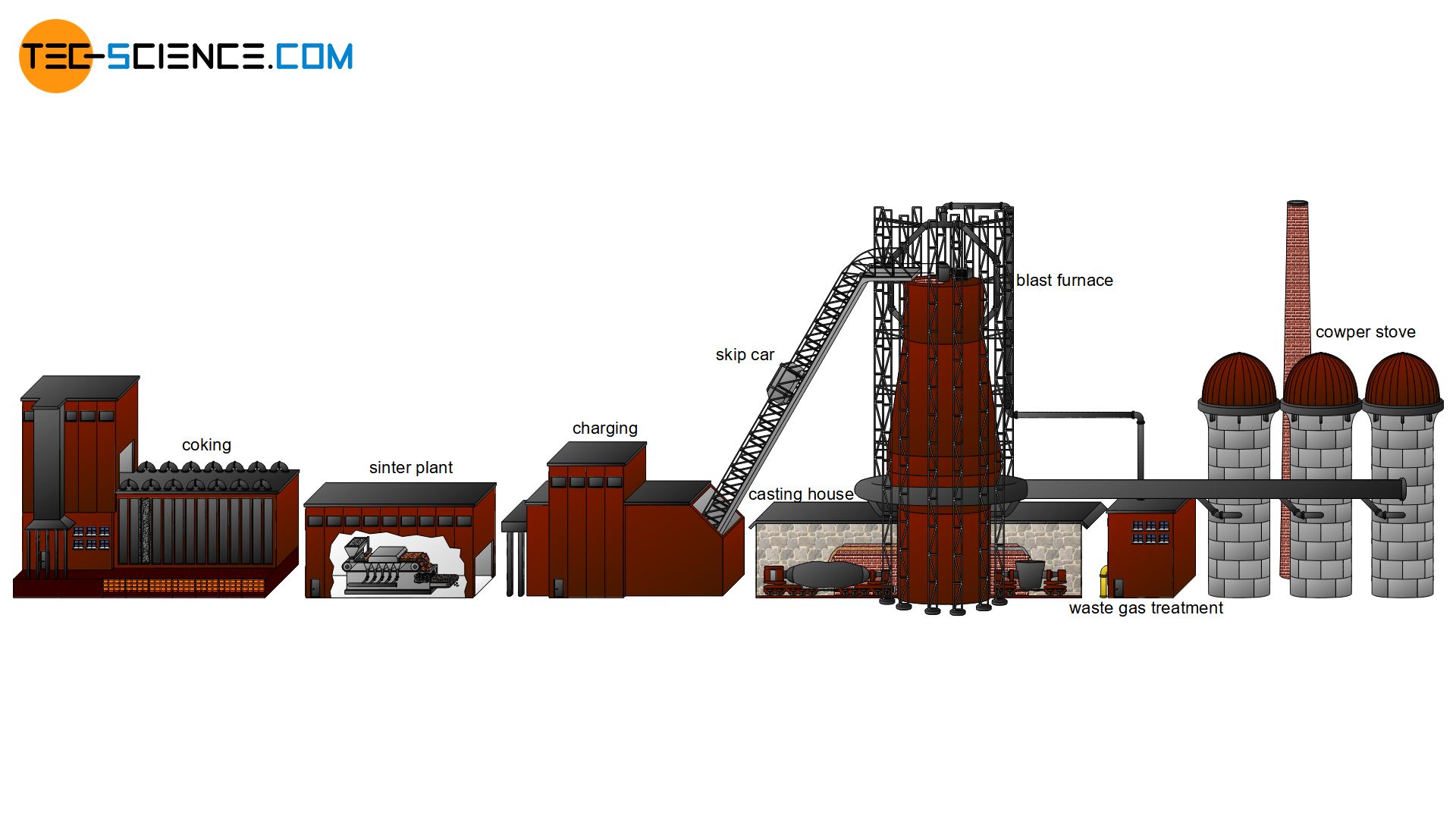 After the iron ore has been mined, it has to be processed for use in the blast furnace in order to optimize the chemical processes.

Iron is one of the most important metals in mechanical engineering, as it is present in sufficient quantities on earth. The extraction of iron can therefore be very economical. However, pure iron is not suitable for use as a construction material. It is much too soft in its pure form and has too little strength to meet most mechanical requirements. For this reason, it is necessary to use alloying additives to give the iron its hardness and strength.

It has been shown that carbon is an excellent alloying element. Within certain limits, carbon has a very high strength and hardness increasing effect and is very cheap compared to other alloying elements. Such a compound of iron and carbon is generally referred to as steel, where the carbon content is less than 2 %. The special importance of steel in mechanical engineering is already demonstrated by the daily production of around 4 million tons of steel!

Steel is an alloy of iron and carbon, with a maximum carbon content of 2 %!

Basically, a distinction can be made between two routes by which steel is made today:

The flow chart shows the basic steps of how iron ore is used to produce semi-finished products of steel. The individual process steps are explained in more detail in the following articles.

Steel is extracted from iron ores (mainly found in sedimentary rocks) and is also known as ore smelting. The plants for the production of pig iron or steel are called ironworks.

An ironworks (or iron works) is an industrial plant for the production of steel from iron ores!

Before the iron ores can be fed to the ironworks, they must first be mined (ore extraction) and specially processed for the blast furnace process (ore processing). These process steps are described in more detail in the following sections.

Iron does not occur in nature as a pure substance but as a compound in rocks, which can contain up to 50 % iron. These ferrous rocks are also called iron ores. The iron compounds contained therein are mainly iron oxides, but also iron carbonates or iron sulphides. The most important iron oxides include:

The iron itself is removed from these iron oxides in the subsequent blast furnace process and processed into steel in combination with carbon.

In addition to the actual iron compounds, however, the iron ore always contains various (undesirable) admixtures, which are not of interest for steel production. These waste rocks are also referred to as gangue and are often oxides such as, for example:

These unwanted admixtures are also the reason why steel always contains accompanying elements such as silicon, manganese, phosphorus and sulphur as well as other elements. The maximum values to be observed for these accompanying elements are prescribed for steels depending on the steel grade.

The undesirable admixtures in the iron ore are called gangue!

For technical and economic reasons, it makes sense to reduce the gangue to a minimum even before the iron ore actually melts down. Otherwise, an unnecessarily high use of coal or thermal energy in the subsequent blast furnace process would be necessary if too much impurities had to be melted. This means that the mined iron ores need to be specially processed in advance before the blast furnace process.

Regions in which iron ore has formed over millions of years (e.g. through volcanism) and can be mined economically are also referred to as iron ore deposits. Especially many ore deposits can be found in countries such as China, Australia, Brazil, India and Russia. These countries account for around 85 % of the total global iron ore mining volume.

Ore deposits are natural accumulations of ores that can be mined economically!

The iron ore extracted in the deposits, mostly by blasting, is initially very coarse and unwieldy, which gives this untreated rock the name coarse ore. After the coarse ore has been extracted, it is crushed directly at the deposits with the aid of cone crushers or jaw crushers to more manageable sizes of approx. 15 mm. This is also known as lump ore. In addition to lump ore, fine ore (approx. 1 mm) and ground ore (ore powder) (approx. <0.1 mm) can also be obtained by crushing and grinding.

Depending on the grain size of the iron ore, it can be divided into lump ore, fine ore and ground powder!

Lump ore can usually fed directly into the blast furnace process, because the special processing of these ores is relatively complex and expensive, so that it is only to a certain extent economically worthwhile to process this ore. Fine ore and ore powder, on the other hand, are specially processed for the blast furnace process. This ore processing will be discussed in more detail in the next section.

After the iron ore has been prepared by crushing and grinding during ore extraction, the ore is actually processed. The aim of this is to reduce the undesirable high proportion of admixtures to a desired minimum in order to increase the iron content. This is done by processes such as flotation or magnetic separation. Subsequently, the milled ores are lumped by sintering or pelletizing in order to optimize chemical reactions in the blast furnace process.

Ore processing (or ore dressing) is the separation of iron ore from gangue in order to optimize the blast furnace process!

In principle, the undesirable gangue can never be completely separated from the iron ores during ore dressing. This means that a certain amount of unwanted elements always enters the blast furnace process. Slag-forming aggregates (and other special processes) are then used to separate these unwanted substances during or after the blast furnace process.

In froth flotation, the different wettability between the iron compounds and the undesirable gangue is used. While, for example, water is wettening the gangue relatively well, i.e. adheres to them, water tends to roll off the ferrous particles. This effect can finally be used to separate gangue from iron compounds.

In froth flotation, the different wettability of the substances is used for separation!

For this purpose, the ground ores (obtained by crushing and grinding) are mixed with water in froth flotation cells. This aqueous suspension is also called slurry. Gas bubbles are generated in the slurry by air supply or stirrers on the floor. Due to the rather low water wettability of the iron-containing ore powder, the rising gas bubbles adhere relatively well to them. The significantly better wettability of the gangue, however, means that they remain completely wetted with water and gas bubbles hardly adhere to them.

While the ferrous particles are thus floated upwards with the adhering gas bubbles, the gangue in the slurry sinks to the bottom. To prevent the gas bubbles from bursting after ascent and to prevent the iron ore from sinking back to the ground, foam stabilizers are added, which create a relatively stable foam layer on the surface. The fluffy, strongly ferrous foam can then be skimmed off and dried. The gangue remaining in the slurry is pumped off after froth flotation and disposed of.

In magnetite-containing rock, there is another possibility of separating gangue and iron ore. As the name magnetite already suggests, this type of iron ore is a magnetic rock. This allows the ground ore to pass relatively easily through magnetic separators, where the ferrous rock is separated from the rest of the gangue (magnetic separation).

For this purpose, the ground ore is mixed with water to a mud-like mass and passed over a rotating magnetic roller. The ferrous mud adheres to the rolls and is then stripped off and dried. The separated gangue falls through a separate funnel into a container and is disposed of. In principle, this process is also suitable for the iron ores siderite and hematite, which become weakly magnetic when heated.

After processing the iron ore in froth flotation cells or magnetic separators, the finely ground ores cannot be fed directly to the blast furnace, as the enormous compression due to the charging in the blast furnace would impede gas flow. The ores must therefore be made lumpy so that there are sufficient cavities in the charging column for a good gas flow through. The lumpy pieces are made by sintering and pelletizing.

During sintering, the fine ores are first mixed with additives and fine coke. This mixture then passes through a funnel onto a circulating moving grate. Ignition flames then set the mixed coke on fire. Due to the high temperatures, the ores “bake” together to a sinter cake (called sintering). Air vents provide a suction effect (“chimney effect”) so that the sinter cake actually bakes together over the entire cross-section. Afterwards, the porous sinter cake is broken to grain sizes of approx. 15 mm by rotating blades. Such sinter plants are usually located directly in the ironworks.

During pelletizing, ore powder is rolled into iron ore green pellets in rotating drums together with water, binding agents and additives. Globules with grain sizes of approx. 15 mm are produced, which are then baked into porous pellets. Pellets are mainly produced by special ore suppliers and then delivered to the ironworks.

The main advantages of sintering or pelleting are the increased controllability of the composition and the accelerated chemical reaction in the blast furnace process due to the porosity (better gas flow).