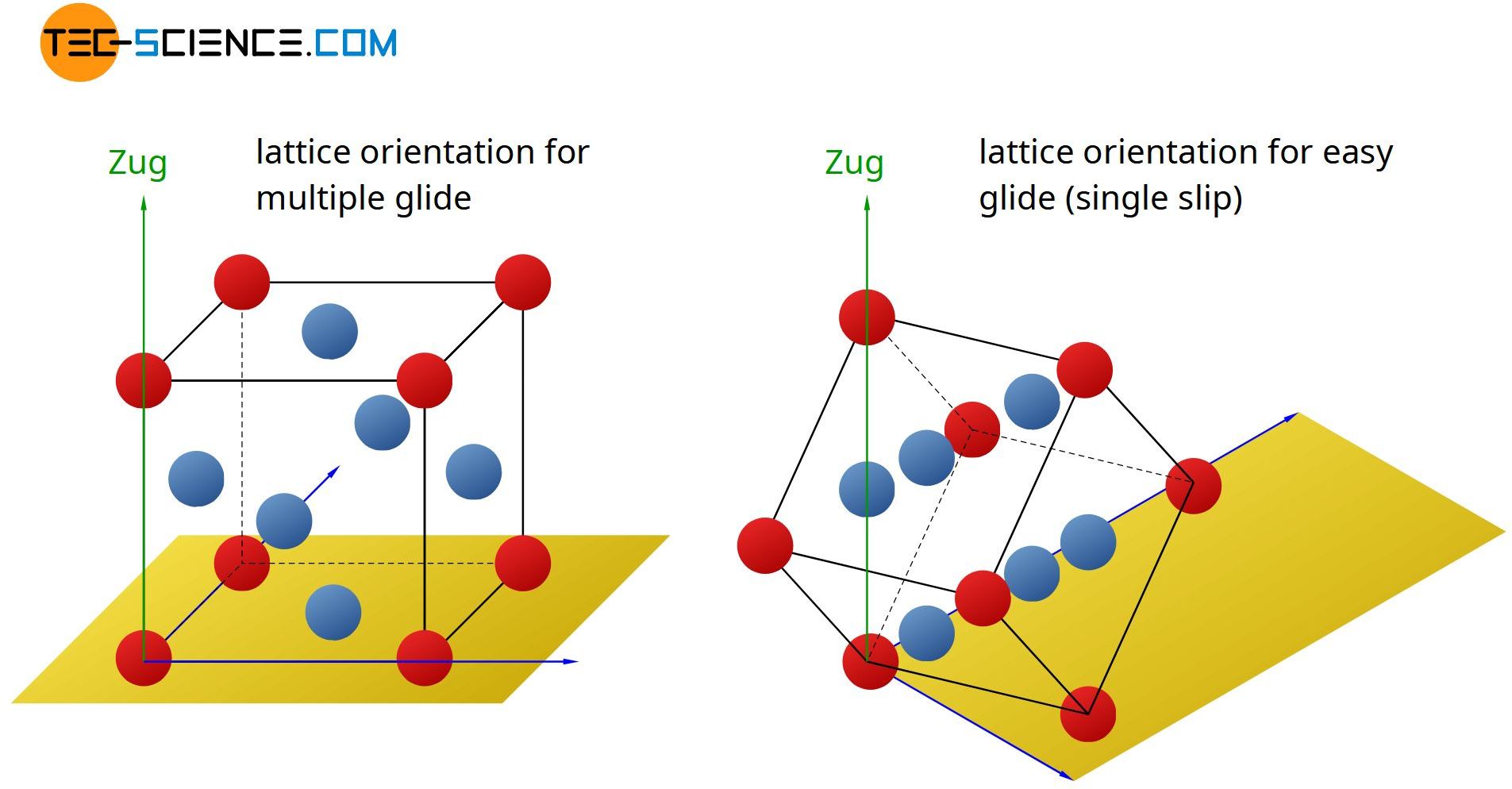 During the deformation of single crystals, slip steps preferably form at 45° to the tensile axis, since the shear stresses are at a maximum.

If a material on the atomic level is characterized by a uniform lattice orientation (no grain boundaries), it is also called a single crystal.

If such a single crystal is deformed under tension, inclined rings are formed in the deformation region. This can be clearly seen from the copper single crystal shown in the figure below. These rings are so-called slip steps.

Why these slip steps preferentially aligned at an angle of 45°, will be clarified in the following sections.

The single crystal with a cross-sectional area A0is externally loaded with the tensile force F0. In order to initiate the deformation process and to allow the atomic planes to shear off, a force F|| must act in the slip planes. Only in this way can the plane actually be moved in the slip direction. On the other hand, a normal force acting perpendicular to the slip planes has no influence on the deformation. As a result, the layers would merely be compressed but not moved.

If the angle \(\alpha\) between the surface normal and the tensile axis is relatively small, the shear force in the slip plane is also relatively low. The force may not be sufficient to activate the slip plane and initiate the deformation process.

There must therefore be a favorable ratio of force and area in order to reach the optimum state where most force per area is obtained. That means where the greatest shear stress is achieved.

Decisive for a slipping of the atomic planes is therefore not the force in the slip plane alone but the acting force per area, i.e. the shear stress (see also fundamentals of deformation):

While the force F|| depends on the angle \(\alpha\) of the slip plane accordingly to the equation (\ref{kraft}), the slip plane area A is determined as follows by the sample’s cross section F0:

The quotient \(\frac{F_0}{A_0}\) appearing in equation (\ref{scherspannung}) corresponds to the normal stress \(\sigma_0\) applied from the outside (“force per cross-sectional area”). For the angle-dependent shear stress \(\tau(\alpha)\), therefore, the following equation applies:

The term \(\cos(\alpha)\cdot \sin(\alpha)\) can further be replaced by the expression \(\frac{\sin(2\alpha)}{2}\). Thus, the effective shear stress \(\tau\) in a slip plane which is aligned at the angle \(\alpha\) to the tensile axis, can be calculated as follows:

External normal stresses induce shear stresses in the material interior, which become maximum at an angle of 45°. In those favorably lying slip planes, the atomic layers therefore prefer to shear off!

This is the reason why the copper single crystal shown above has slip steps at an angle of about 45° to the tensile axis. The prerequisite for this is that the lattice structure is spatially oriented in such a way that a slip plane is aligned at an angle of about 45°. The effects of the deformation process when the slip plane is not at 45 ° will be discussed in the next section.

What does the deformation of a single crystal look like if its slip planes are not at an angle of 45°? Due to the less favorable position, larger external normal stresses are required in this case, so that the critical resolved shear stress in the slip plane (and in the slip direction!) will be exceeded.

In the case of a very unfavorable position of the (primary) slip planes, this can even lead to an activation of other slip planes, which normally only come into account at higher stresses, because in them the critical shear stress is exceeded first. Slipping then probably takes place in several different slip systems.

This will be the case if the different slip planes are relatively symmetrical arranged to the tensile axis. Then the critical shear stress in all slip systems is reached approximately simultaneously. For face-centered cubic monocrystals, the unit cells must be aligned nearly parallel to the tensile axis (see figure after next).

All four slip planes are then activated equally. Due to the fact that the shearing takes place on several different slip planes, one also speaks of multiple gliding. By such multiple gliding, the crystal is then deformed in different directions. The slip steps exit the material at different angles and spatial directions. The superposition of these slip steps makes it impossible to distingish different slip steps from one another. Therefore they are not visible with the naked eye.

Thus, upon reaching the limit stress, only this slip plane was activated, while the shear stresses in the remaining slip planes (or in the slip direction) remained below the critical resolved shear stress. Since in such a case, the sliding takes place only within one slip plane, this process is also referred to as a single gliding or easy gliding.

The external normal stress that has to be applied \(\sigma_{crit}\) to a material in order to exceed the critical resolved shear stress in a slip plane, is referred to as yield strength or elastic limit.

This characteristic value thus refers to the (tensile) stress at which an irreversible deformation process begins. As explained, the yield strength for single crystals depends on the spatial orientation of the lattice! The lowest value of the yield strength is therefore obtained for single crystals when their slip planes are aligned at an angle of 45 ° to the tensile axis.

The yield strength marks the stress limit from which on a material deforms plastically!

The annular depiction of the slip steps at an angle of 45° is only evident in specially oriented single crystals. However, single crystals can only be produced with great technical effort. They are therefore limited to special applications such as nickel-based single-crystal turbine blades or silicon chip production.

Thus, in such polycrystals several slip systems with different slip plane orientation are always simultaneously activated (multiple gliding). A uniform exit of slip steps is therefore not visible in such materials anyway. How it comes to such a nonuniform lattice orientation is explained in more detail in the chapter microstructure. 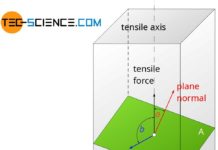 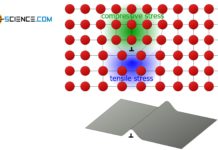