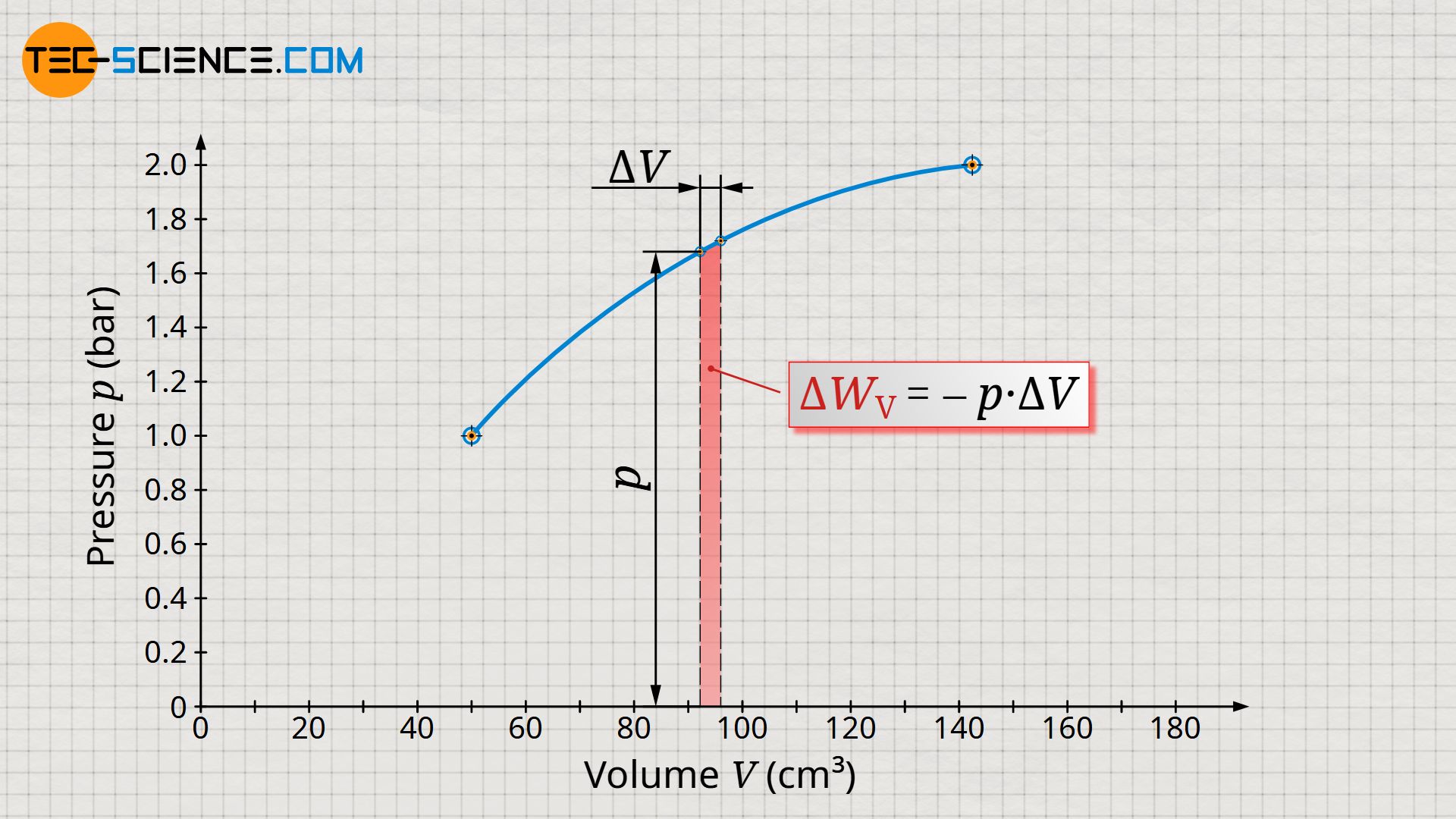 Learn in this article why the area under the curve in a volume-pressure diagram corresponds to the pressure-volume work (displacement work).

In the article concept of pressure-volume work, it was said without further explanation that the area under the curve in a volume-pressure diagram corresponds to the pressure-volume work (displacement work) done by the gas. In this article, we would therefore like to explain in more detail why the area under the curve corresponds to the displacement work.

For this purpose, we consider the thermodynamic process of a gas which is enclosed in a cylinder and sealed with a movable piston. The gas is then heated. The gas expands as a result and does work on the piston. This causes a weight to be lifted via a rack and gear. In the volume-pressure diagram, this process is depicted as shown (further explanations of this process can also be found in the article concept of pressure-volume work).

Let us now consider an arbitrary state during the process. This state is characterized by the volume V and the pressure p. Starting from this (initial) state, we now consider the (final) state a short moment later. The volume of the gas will increase only slightly. The change in volume between the two states should be chosen so small that the pressure (almost) does not change and can thus be considered almost constant.

During this very small change in volume, the gas then obviously exerts a (nearly) constant force F. This force is determined from the product of the (nearly) constant gas pressure p and the piston area A on which the pressure acts:

Thus, during the change in volume, the force (almost) constant F=p⋅A acts along the distance Δs=ΔV/A. According to the definition of work as the product of force F and displacement Δs, the (pressure-volume) work ΔWv performed by the gas within the volume change ΔV can thus be calculated as follows:

Determining the total pressure-volume work in the way described above would be very time-consuming, and small errors would always be made, since the pressure within the volume intervals ΔV is not constant but varies slightly. Only under the assumption of infinitely small intervals (ΔV→0) would an exact result be obtained.

At this point, mathematics offers a better solution. If the individual volume intervals are considered to be infinitely small, the macroscopic volume change ΔV turns into a infinitesimal volume change dV and the sum sign becomes an integral. If the pressure is known as a function of the volume – i.e. the function p(V) – then the total pressure-volume work Wv can be determined in general by the following integral:

Since an integral determines the area under a curve, this makes it clear once again that the area under the p(V) curve corresponds to the pressure-volume work!