Home Mechanics Gases and liquids How does a hydraulic jack work: Pascals law 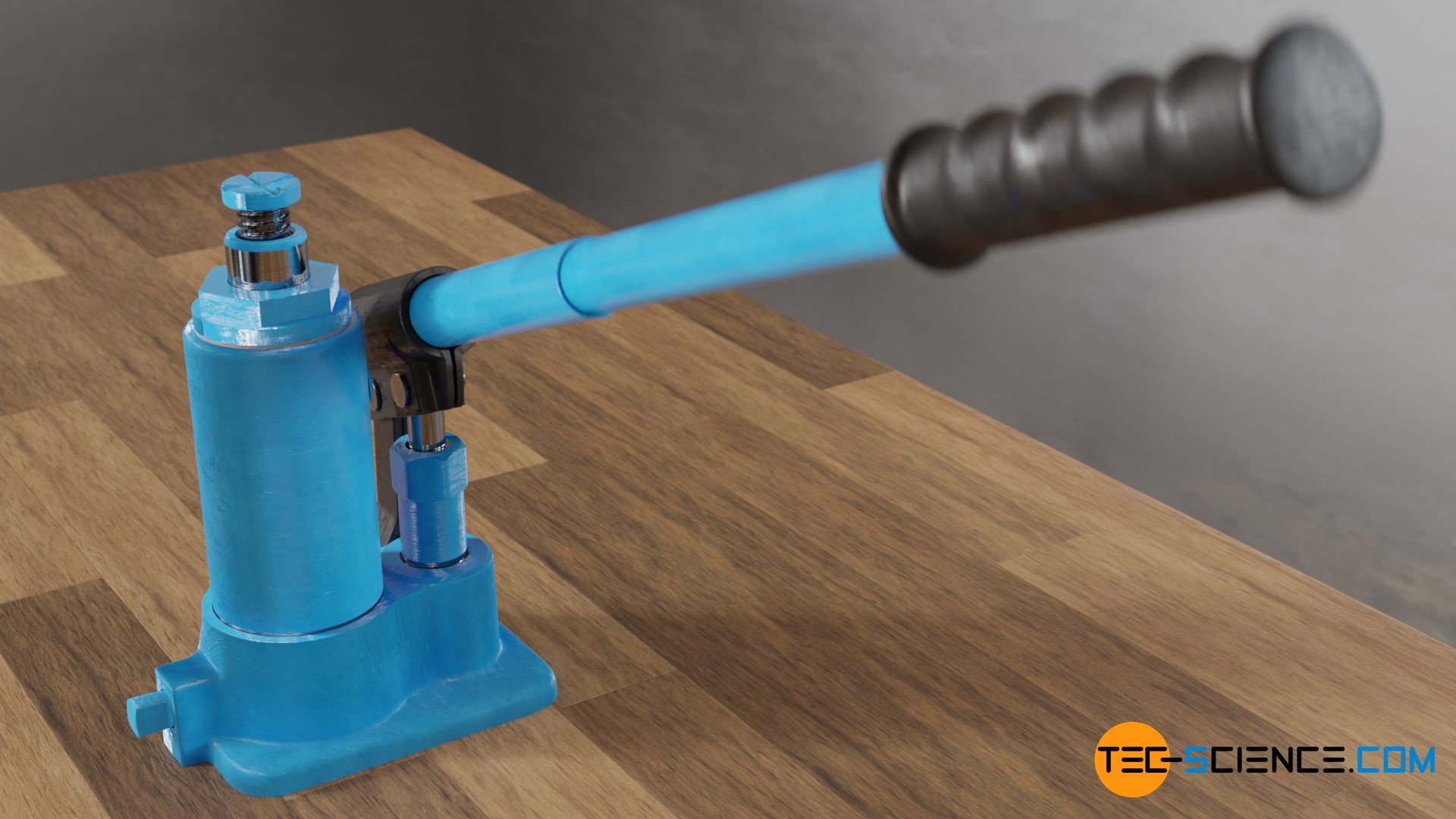 A hydraulic jack is based on Pascal’s law, which states that the pressure in liquids acts equally in all directions.

In the article Pressure it has already been explained that pressure in liquids (or gases) is evenly distributed in all directions. If, for example, a certain pressure is generated at one point within a liquid, then the same pressure will be present at every other point in the liquid (neglecting the hydrostatic pressure). This is often referred to as Pascal’s law or Pascal’s principle.

Pascal’s law describes the uniform distribution of pressure in a liquid (neglecting the hydrostatic pressure)!

For liquids in an open container, the pressure at the liquid surface corresponds to the ambient pressure (“atmospheric pressure”). If the liquid is not very deep, the hydrostatic pressure can usually be neglected compared to the larger ambient pressure at the surface. If, for example, the depth is in the order of a few centimetres, then the hydrostatic pressure is about a thousand times lower than the atmospheric pressure. In this case, it immediately becomes apparent that the same pressure exists at every depth:

This simple principle is used, for example, in syringes. The liquid to be applied is contained in a cylindrical housing (barrel), on which a pressure is exerted with a piston. The resulting pressure causes the liquid to be pressed out of the orifice.

The figure below shows a hydraulic jack. A lever is used to pressurise a hydraulic fluid by a piston, thereby moving another piston upwards with great force. With such a hydraulic jack, loads of up to several tons can be lifted. The increase in force is in part due to the Pascal principle.

The figure below shows the simplified design of a hydraulic bottle jack, which shows the principle of operation. The hydraulic fluid is in a closed system. The housing in which the fluid is confined is provided with two pistons. The oil is put under pressure by the smaller piston (called pump piston or pump plunger).

Using the applied force F1 and the surface area of the piston A1, the exerted pressure p can be determined relatively easily from the quotient of force and area:

According to Pascal’s law, this pressure can be found at any point of the liquid. Note that due to the large pressures applied and the relatively small dimensions of the housing, the hydrostatic pressure can be neglected anyway. The pressure generated by the small piston therefore also acts on the second piston, called ram (working piston). However, since this piston has a larger surface area A2, the pressure there leads to a larger force F2:

This is also clearly illustrated, as the pump piston displaces a certain amount of hydraulic fluid during the downward movement (height h1). Liquids are incompressible and therefore cannot be compressed. Therefore the displaced liquid extends the working piston by the same volume (height h2). However, the ram has an area four times as large, so that this volume is already achieved with a quarter of the original stroke. As the force is increased, the lifting height is reduced accordingly.

In fact, this hydraulic amplification of the force is only one of a total of two principles applied to a jack. The much greater force amplification is due to the mechanical leverage. Usually it is a second class lever.

Construction of a hydraulic jack

The figure below shows the structure and operating principle of a real hydraulic bottle jack. The hydraulic fluid is located in a reservoir between two cylinders; an outer cylinder (oil tank) which forms the housing wall and an inner cylinder in which the working piston (ram) slides. The hydraulic fluid inside this reservoir is not pressurized all the time! During the upward movement of the pump piston (pump plunger), the hydraulic oil is sucked into the pump cylinder by an inlet passage.

The oil is then pressurised during the downward movement of the pump piston. This causes the oil to flow through another passage into the working cylinder, where it lifts the ram.

To lower the ram again, another passage is opened, which connects the working cylinder directly to the reservoir. During lifting, this passage is sealed with a steel ball which is pressed firmly into the valve seat with a screw. If this release valve is unscrewed, the ball releases the passage and the hydraulic oil is pushed back into the reservoir under the force of gravity of the ram.

In order to protect the jack from damage in the event of overload, the release valve is designed as a safety valve and is usually provided with a spring. If the pressure is too high, the spring is pushed back and the hydraulic oil can flow directly back into the reservoir without an unacceptably high pressure building up in the working cylinder.