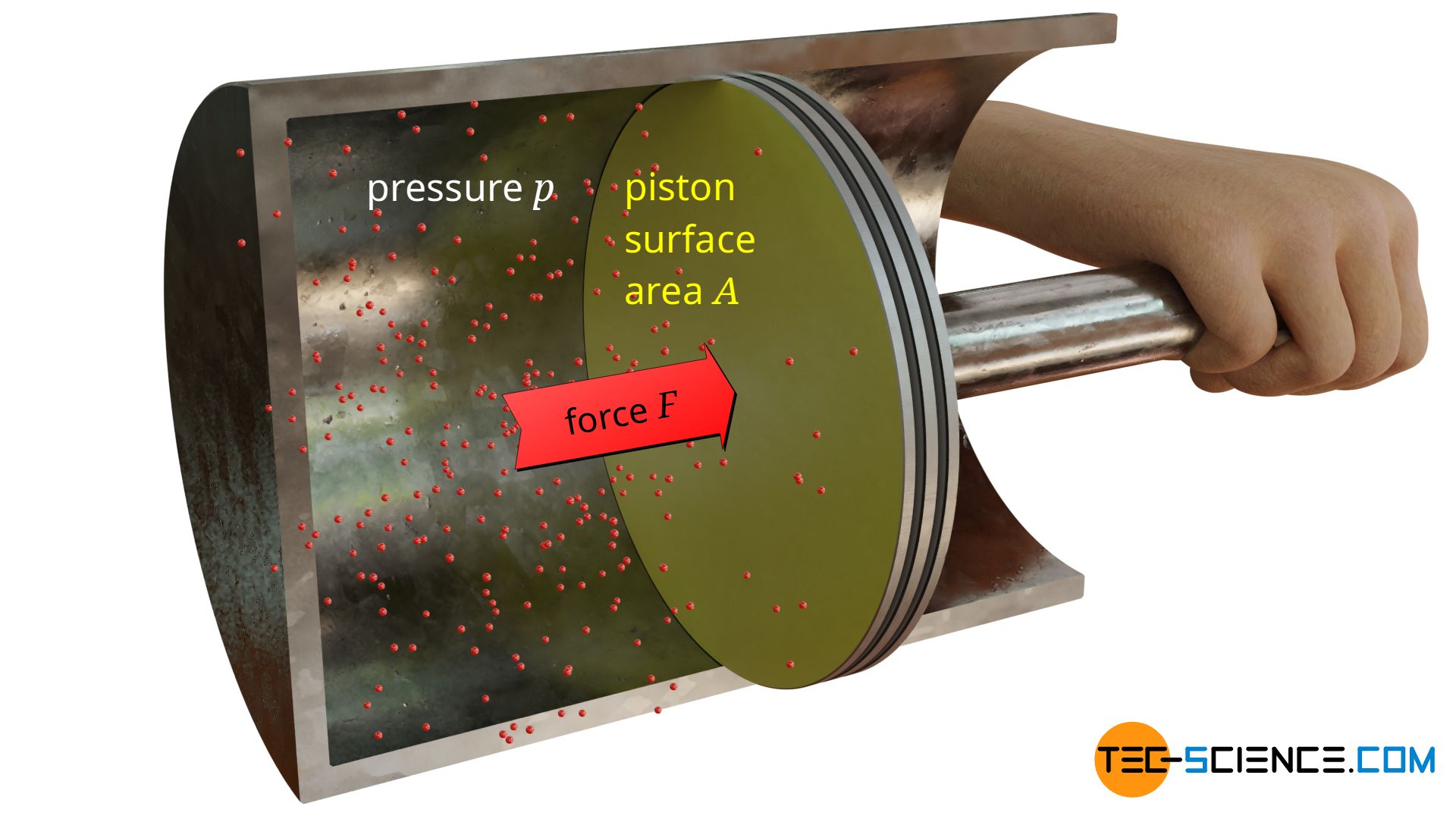 The pressure of gases is caused on a microscopic level by collisions of the gas molecules with its container walls!

Pressure p in the physcal sense is determined as the quotient of force F and area A. Thus the pressure describes the force distribution at an interface between two objects (“force per area unit”), for example between a gas and a piston.

With the pressure of gases, for example, forces are exerted on the pistons in the cylinders of combustion engines. These pistons are connected to the crankshaft by connecting rods and convert the linear motion into a rotational motion, thereby driving the wheels. The pressure of gases therefore plays a very important role in everyday life and in technology. But how can the cause of the pressure in gases be explained?

Particles of gases can move relative free within a closed volume (see also article Particle model of matter). Below animation illustrates free air molecules within cylinder. The gas particles collide constantly with the surrounding cylinder wall or with the surface of the piston.

On collision with the boundary surfaces, the molecules thus cause a force – analogous to tennis balls thrown against a wall. The pressure in gases is thus caused on a microscopic level by collisions of the gas molecules, which collide with adjacent surfaces.

The pressure of gases is caused on a microscopic level by collisions of the gas molecules with its container! Due to the random motion, the pressure is the same in all directions!

On a macroscopic level, these microscopic collisions become noticeable by a force and can therefore be characterized as force per area (“collisions per area”), i.e. as pressure.

In the present case, where a gas is sealed in a cylinder with a piston, the gas pressure inside the cylinder can be determined relatively easily. The only thing to do is to apply a counterforce F of the same magnitude against the gas pressure to hold the piston in position. The applied force corresponds to the force which the gas effectively exerts with its pressure on the opposite side of the piston (also called gauge pressure). Obviously the gas exerts this force F on the piston surface area A, so that the effective gas pressure pe can be determined according to the equation (\ref{p}):

With a piston diameter of 5 cm (this corresponds to an area of 19.6 cm²) and a force of 100 N to be applied, an effective gas pressure of 50930 Pascal is obtained. This example shows that the usual gas pressures in everyday life have a very high value if they are given in the unit Pascal. Therefore, it is common practice to indicate gas pressures in the “handier” unit bar. 1 bar corresponds to 105 N/m². As a result, the gauge in the above example is about 0.5 bar.

In the article Pressure and temperature you can find more detailed information on the determination of the gas pressure using the kinetic theory of gases.

In reality, it is not only the enclosed gas in the cylinder that causes pressure. Also on the opposite side of the cylinder there are usually gas molecules which produce a certain pressure. In the simplest case these are the molecules of the surrounding air, which in turn exert a pressure on the piston. This pressure outside the considered system is also referred to as ambient pressure. In the case of atmospheric air, this ambient pressure is simply called atmospheric pressure.

Ambient pressure is the pressure outside a considered system; usually the atmospheric pressure!

Usually, however, we do not feel the atmospheric pressure, because on average, the same number of molecules from one side as from the other are acting on us over time. This is also the reason why no resultant force is exerted by the air particles on a piston which is held freely in the air. On average over time, the same number of particles collide with the piston surface from one side as from the other. The pressure effect is thus the same on both sides and maintains equilibrium without further ado.

If the piston considered above, which was first held free in the air, is now enclosed in a cylinder and additional particles pumped in on the left side, the equilibrium between the left side and right side of the piston is destroyed and a resultant force is acting.

Positive pressure or gauge pressure referes to the proportion of pressure that is above the ambient pressure!

Absolute pressure refers to the pressure that is actually present as gas pressure due to the collisions of the molecules!

This force corresponds to the resultant force exerted on the piston rod and which can actually be used for technical purposes.

An resultant force can not only be produced by pumping additional air molecules into one side of the cylinder, but also by sucking molecules away. In this context, one also speaks of negative pressure, since the gas pressure in the left chamber is then below the ambient pressure. In this state, the piston must be held in position with an additional force. If, on the other hand, the piston is released, it is pushed to the left by the greater pressure in the right side of the cylinder.

Negative pressure refers to the part of the absolute pressure which is below the ambient pressure!

In the example above, the suction of the air molecules on the left side of the cylinder to create a negative pressure also has limits. After all, it is only possible to suck off up to the point where all the particles have been completely removed. This state, in which a volume contains no more molecules, is called vacuum.

Vacuum is referred to the absence of molecules in a volume!

Since there are no gas particles in a vacuum, the left chamber of the cylinder therefore no longer exerts any pushing force. The pressure on the piston is thus exclusively caused by the ambient air molecules on the right side of the piston.

Thus, by completely sucking off the particles, one does not have an infinitely large “suction effect” as is often assumed, but in this case the force is thus limited by the ambient pressure on the opposite side of the piston.

Due to the absence of gas molecules and a force, the absolute pressure in a vacuum is therefore 0 bar. This means that at sea level a maximum negative pressure of 1 bar can be generated. This limited negative pressure also means, for example, that suction pumps can theoretically only pump water to a maximum depth of 10 metres. More about this in the article Drinking straw principle.