Home Mechanical power transmission Basics What is a gear stage? 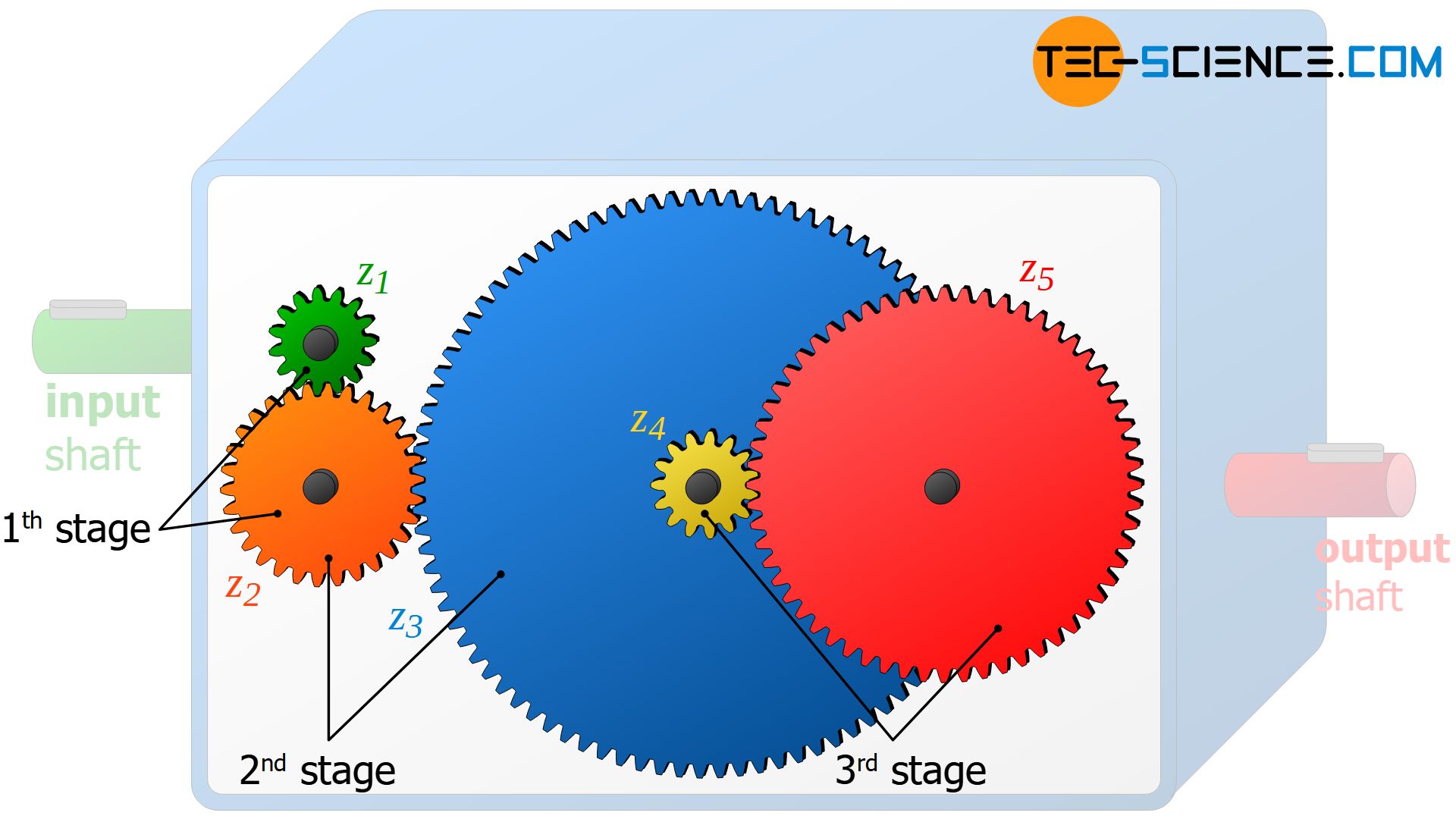 A gear stage is a wheel pairing within a gearbox at which the speed or torque changes! Learn more about gear stages in this article.

The figure below schematically shows a toothed gear whose basic function was explained in more detail in the article Operating principle. As this animation shows, a transmission usually consists not only of one pair of gears but of several, each mounted on different shafts. Each pair of gears that meshes with each other represents a so-called gear stage.

A gear stage is a wheel pairing within a gearbox at which the speed and torque changes!

The reverse relationship applies to the speeds. This means, that the rotational speed between input and output of the gearbox is reduced by a factor of 24. Consequently, the input shaft must rotate 24 times for one revolution of the output shaft.

The figure below shows the true-to-scale dimension of a single-stage gearbox with the same overall transmission ratio as the 3-stage gearbox.

However, it must be noted that the friction increases with each gear stage. This is partly due to the fact that a total of more teeth mesh with each other, which generally slide against each other and thus also generate more friction. On the other hand, the respective shafts of the gear stages have to be mounted and thus cause increased bearing friction.

Influence of the number of teeth

It has already been explained that changing the number of teeth of a gear has a direct effect on the transmission ratio of the corresponding gear stage and generally also affects the overall transmission ratio.

Depending on the function of the gearbox, however, gearwheel 2 is by no means superfluous. Because without it the output shaft rotates against its original direction of rotation! The intermediate gearwheel 2 serves as a so-called idler gear and thus has the function of adjusting the sense of rotation of the output shaft (reversal of the direction of rotation). In order to fulfill this task, the idler gear 2 could in principle also be placed between gearwheel 4 and 5.

An idler gear reverses the direction of rotation without affecting the overall transmission ratio!

Arrangement of the gears

In order to design transmissions effectively, two different gears must always be arranged on a common shaft, which in turn drives a shaft with another pair of gears. In this case, the number of teeth of all gears is then included in the calculation of the overall transmission ratio!