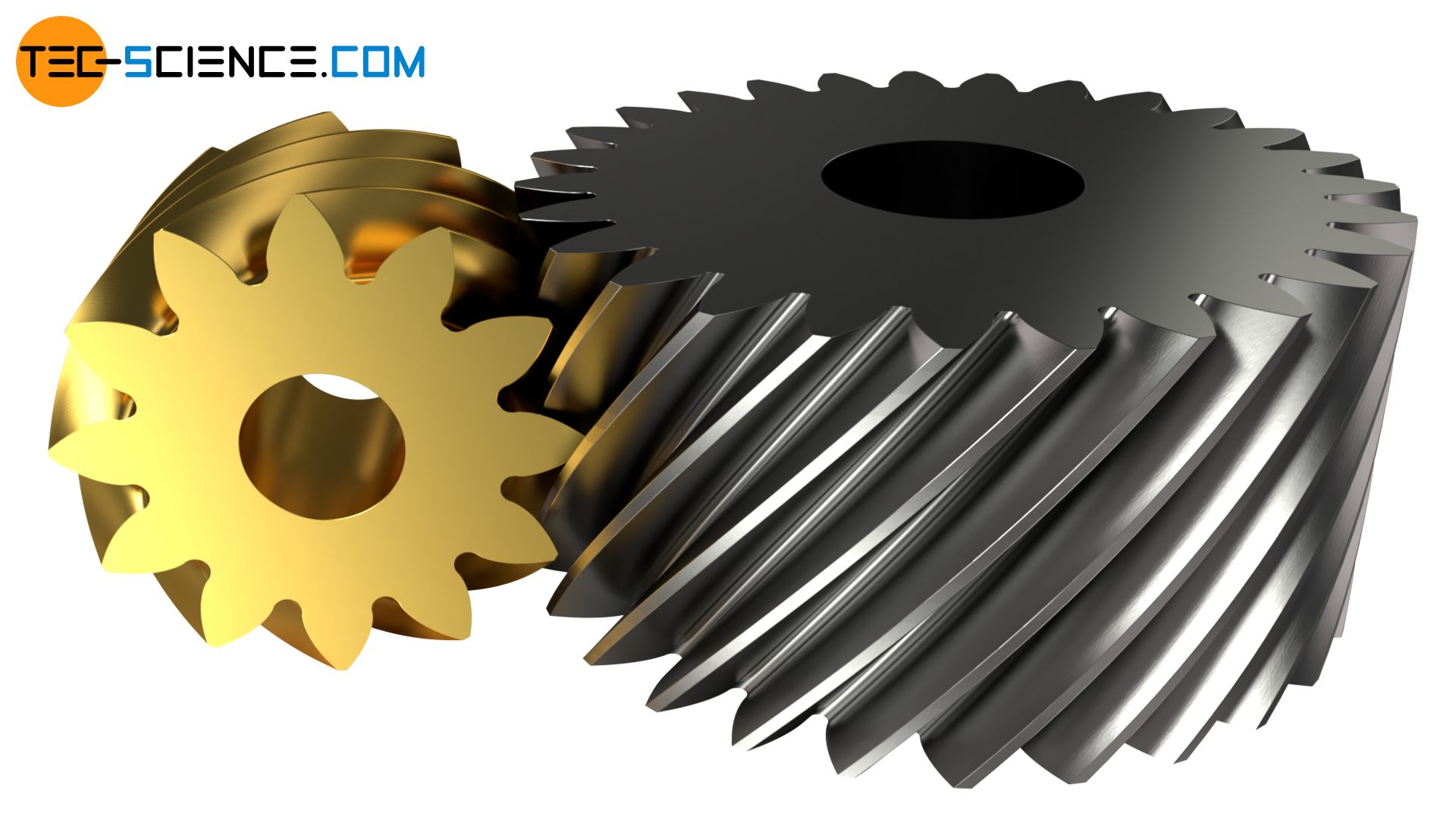 Screw gears or crossed helical gears are hyperboloid gears that allow the skew mating of the gear shafts!

With the gears considered so far, the axes of rotation are always parallel when meshing. With a special variant of helical gearing, gears can also be manufactured in such a way that the axes run skew, i.e. they cross each other without intersecting. In such a case one speaks of so-called screw gears or crossed helical gears (hyperboloid gears). Usually the axes of paired screw gears run at an angle of 90° to each other, but in principle any other angle is also possible.

As the name suggests, the screw gears no longer show a pure rolling movement during engagement, but a screw motion. Typical for screw motions is the permanent sliding of the flanks. Thus, there are no points on the reference bodies of crossed helical gears to which a pure rolling process can be assigned (i.e. the circumferential speeds of the gears are not identical at any point). The reference bodies of screw gears are no longer “pitch bodies” but so-called rotational hyperboloids! A hyperbolioid is obtained by rotating a skew straight line around an axis of rotation.

The constant sliding of the flanks usually requires special lubrication of the screw gears (hypoid gear oil), otherwise increased wear is to be expected. Due to the screw course of the teeth, the flanks no longer touch each another line-shaped, but the contact is punctiform (exception: worm gears). In addition, the screw tooth path causes strong lateral forces, which must be absorbed constructively by an appropriate bearing.

Therefore, screw gears are designed for moderate torques and speeds, e.g. for drives for machine tools. The use of screw gears also has a disadvantageous effect on transmission efficiency, which is lower due to the sliding processes on the flanks.

The advantage of crossed helical gears, in addition to the already mentioned oblique arrangement of the gear axes, is their low-noise operation. In addition, screw gears can be shifted axially within relatively wide limits without having too much negative influence on power transmission.

When pairing screw gears, which are designed as “cylindrical” helical gears, one also speaks of hyperboloid gears. However, the reference shape of screw gear can also be “conical” (see article bevel gears). Such screw bevel gears are also referred to as hypoid gears.