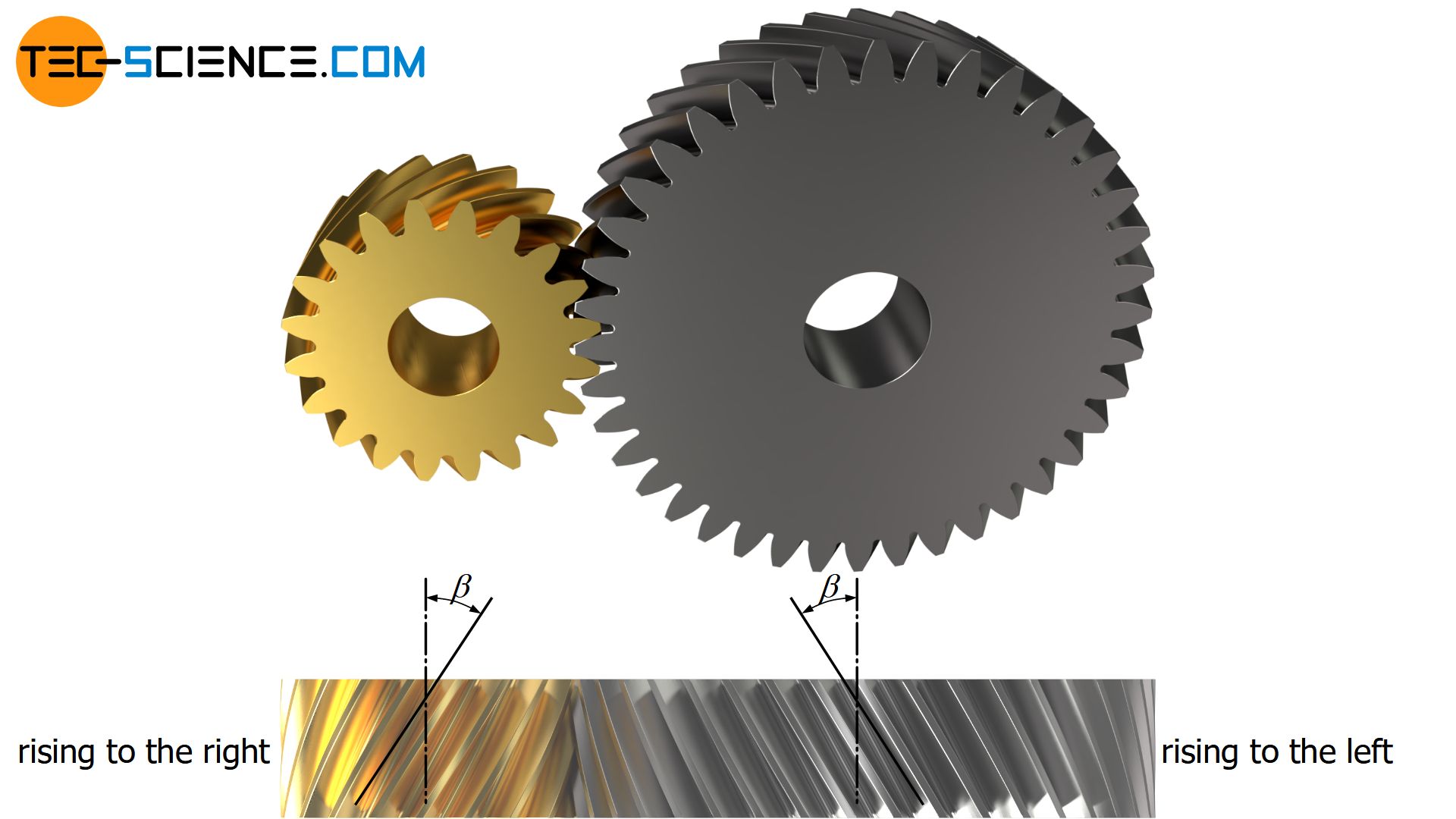 Helical gears have a lower noise level and can transmit higher torques than spur gears!

When it comes down to reduce noises and transmit high torques, helical gears are often used. With such helical gears, the teeth no longer run as a straight line in axial direction as with spur gears, but at a certain angle (depending on the application between 20° and 45°). Since the gear wheel has a cylindrical basic shape, the tooth profile describes a segment of a helix (analogous to the spiral thread of a screw).

One can only get a straight tooth line if you imagine the teeth as a winding off (helical toothed rack), just as the unwinding of a thread also produces a straight thread line. The angle between the unwinded tooth line and the original axis of rotation is called the helix angle \(\beta\).

With helical toothing, the force for a pair of mating gears does not suddenly apply over the entire tooth width but is point-shaped (point contact!). At the end of the meshing, the force transmission does not drop abruptly, but the tooth gradually slips out, so to speak. This special meshing reduces the noise level of the gearbox significantly.

Since the circumferential forces at the beginning and end of the meshing only concentrate on a very small tooth area, these initially cause very high tooth loads. For this reason, several teeth should always be engaged at the same time in helical gears in order to distribute the load accordingly over several teeth (higher overlap ratio). If this is taken into account, helical gears can transmit higher torques than spur gears with the same dimensions.

Helical gears have a lower noise level and can transmit higher torques than spur gears!

The higher noise level of spur gears compared to helical gears can be heard very clearly, for example, in automobiles when reversing. In contrast to the gears for forward speed, the gears for the reverse speed are straight-cut toothed for cost reasons. This leads to the typical and significantly louder transmission noises while reversing!

While the tooth loads in a spur gear act purely in the circumferential direction, axial forces are generated by the pitch of the helix in helical gears. The larger the helix angle \(\beta\), the greater the axial forces will be. This must be taken into account when bearing the gear shafts. The direction of axial force depends on the sense of rotation of the helical gear.

Helical gears cause axial forces which must be absorbed by bearings!

This disadvantage due to the generation of axial forces can be eliminated by means of herringbone gears or double helical gears, as described in more detail in the next section.

Helical gears also have a negative effect on bearing wear, since the axial forces that occur lead to greater bearing forces.

The bearing wear is greater with helical gears than with spur gears!

When mating two helical gears, care must be taken to ensure that the helix angles are identical (and the module of course). Furthermore, the helix directions must be directed in the opposite direction. Analogous to screw threads, one speaks of left-hand helical gear or a right-hand helical gear (see figure above). This designation results from the direction in which the flank rises when the axis of rotation of the gear wheel is vertically aligned.