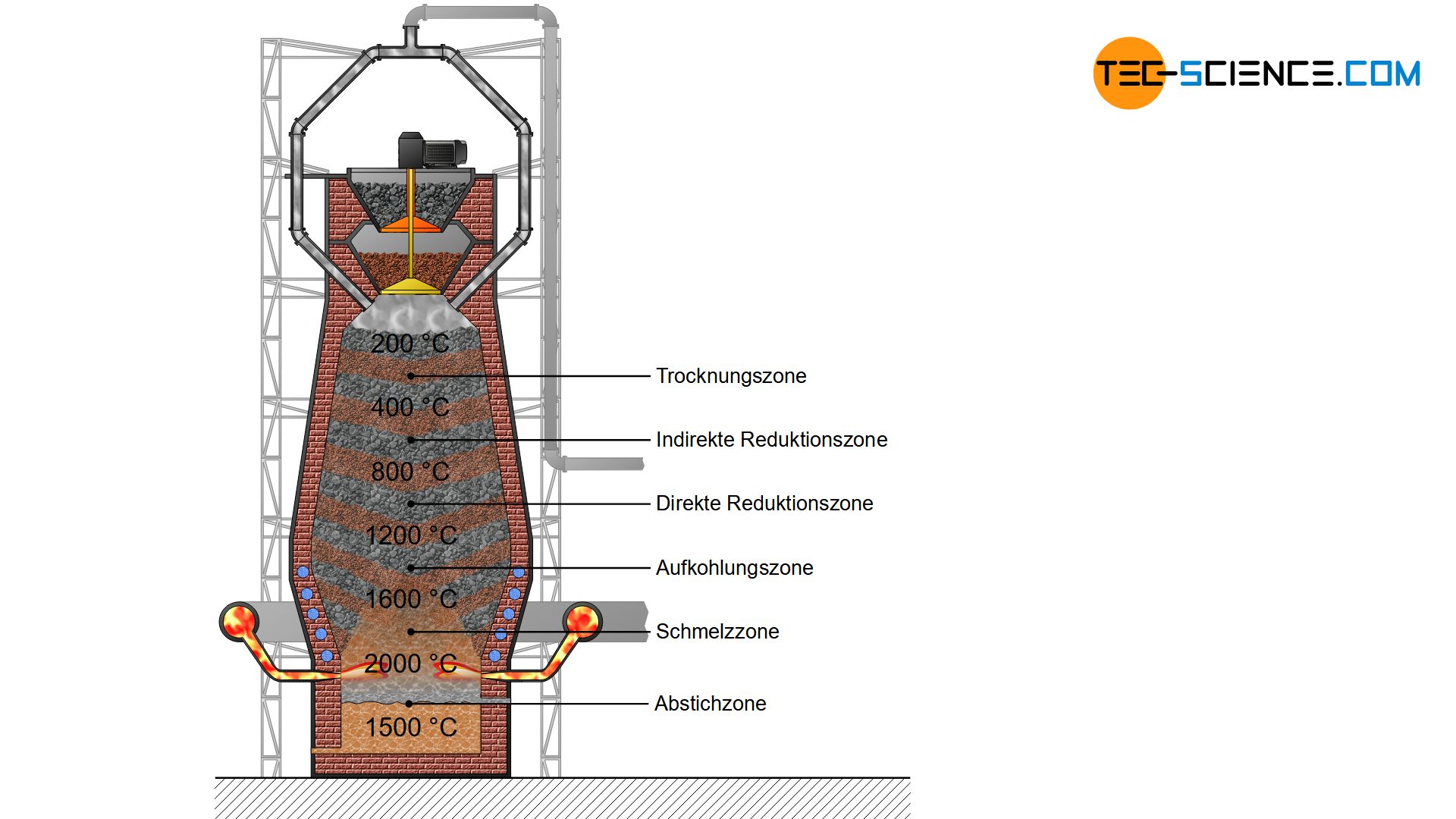 In the blast furnace, the iron ore reacts with the carbon contained in the coke to form grey or white pig iron.

The iron in the processed ores must be dissolved out by chemical processes. This requires an element that binds oxygen more strongly than iron. This is exactly what carbon can do as a reducing agent. The carbon is fed to the blast furnace in the form of coke (pyrolyzed coal) from the coking plant.

The use of carbon as a reducing agent is not only due to its high availability but as a gaseous substance carbon monoxide has the advantage that it can penetrate the porous ores well and react with the iron oxides. For this reason, the iron ores are also processed as porous as possible in the form of sinter and pellets.

Carbon not only provides the necessary heat to melt the iron ore but also serves in a special way as a reducing agent to reduce the iron oxides to iron!

The individual chemical processes in the blast furnace are described in more detail in the following sections.

To generate the necessary heat and the reducing carbon monoxide gas (\(CO\)), the coke is burnt in the lower part of the blast furnace with the supply of the hot-blast. The carbon (\(C\)) contained in the coke initially reacts with the atmospheric oxygen in the hot-blast (\(O_2\)) according to the following chemical equation to carbon dioxide (\(CO_2\)):

This combustion is very strongly exothermic, i.e. heat is released – as is usual in a combustion process. This leads to a temperature increase of up to 2000 °C. The carbon dioxide gas (\(CO_2\)) reacts with the carbon contained in the coke (\(C\)) due to the very high temperatures and forms the carbon monoxide gas (\(CO\)) as the reducing agent:

Too low a temperature would again mean the back reaction (indicated by the double arrow in the chemical equation) of the carbon monoxide to carbon dioxide. But precisely this carbon monoxide is necessary for the reduction of iron oxides and must be produced in sufficient quantities.

The reaction of carbon dioxide and carbon to carbon monoxide and its reverse reaction is temperature-dependent and is described by the so-called Boudouard reaction.

The situation can be illustrated by the evaporation of water in a closed room filled with air. Depending on the temperature, the air can absorb a certain amount of water. If the air is completely saturated with water, it cannot absorb water any further and a remainder of liquid water remains in the room. Over time, a balance between the water that is still liquid and the water contained in the air will develop.

While the liquid water can evaporate briefly at a local point due to statistical fluctuations (“reaction”), water is again condensed locally from the supersaturated air at another point (“reverse reaction”). Globally, however, an equilibrium between these phases or between the reaction and its reverse reactionof liquid and air-bound water will occur. One also speaks of a dynamic equilibrium.

However, this dynamic equilibrium can be shifted in favour of or at the expense of the liquid water, depending on the temperature. At high temperatures, the air can absorb more water, so that more water evaporates and the residual liquid content decreases. The equilibrium thus shifts in the direction of the evaporation process. If the temperature is lowered, however, part of the water bound in air condenses and the liquid content of the ground rises. The equilibrium then shifts in the direction of the condensation process (this effect can also be seen very clearly on cooled beverage cans, where the water contained in the air condenses and water pearls form).

The combustion of coke produces hot gases consisting mainly of carbon monoxide, carbon dioxide, nitrogen and (gaseous) water. These hot gases rise up in the blast furnace and cool down. From a maximum of 2000 °C at the level of the hot-blast nozzles (tuyere), the temperature decreases to around 200 °C up to the throat. At this temperature, the filled charge are first dried and preheated. This zone of the blast furnace is therefore called the preheating zone.

In the preheating zone the charge is preheated and dried!

A further lowering of the iron ores in the blast furnace leads to the temperature zone of 400 °C to 800 °C. In this region, the so-called indirect reduction of iron ores to iron by carbon monoxide takes place.

The carbon monoxide gas (\(CO\)) is oxidized to carbon dioxide (\(CO_2\)) by absorbing the oxygen contained in the iron oxide (\(O\)). The indirect reduction can be divided into several intermediate reactions, whereby the iron content in the ores continuously increases and ultimately pure iron is produced.

Only the last chemical reaction of wüstite to iron is exothermic and supplies heat. However, the heat released is sufficient to supply heat for the first two endothermic reactions. The overall balance thus remains exothermic. Nevertheless, the temperature in this indirect reduction zone of 400 °C to a maximum of 800 °C is too low to melt the reduced iron! The consistency of the iron is therefore still solid.

The unmelted iron ores still contain non-reduced iron oxides. An unfavourable accumulation of ores at the contact points can also make gas flow difficult and thus leave non-reduced iron ore behind. At the latest, however, when the melting process occurs in the deeper and hotter zones of the blast furnace, iron ores can be almost completely reduced.

If the iron ores, which have not yet been reduced, move further down in the blast furnace, then the carbon can also directly reduce the iron oxides contained in the ore due to the high temperatures. The carbon (\(C\)) is oxidized to carbon monoxide (\(CO\)) by the absorption of oxygen (\(O\)). Due to the direct reduction of iron oxides by carbon, one also speaks of a direct reduction.

All these reactions are endothermic. The heat required for this is provided by the (exothermic) combustion of the coke. The silicon, manganese and phosphorus compounds (and many other compounds) contained in the gangue are also reduced endothermically. The heat required for this must also be generated by burning of coke. In order to keep the heat input as low as possible for energetic reasons, as little gangue as possible should be contained in the ores. This makes the ore processing described above necessary.

The reduced admixtures in the blast furnace then react with the added flux in the charge and are bound in the resulting slag.

In the direct reduction zone, carbon takes part directly in the reduction of iron oxides!

Although the carbon reduces the iron oxides and produces iron, the iron formed is partially enriched with carbon itself. This is done either by the carbon monoxide gas or, at higher temperatures, directly by the carbon. This produces iron carbide \(Fe_3C\), also known as cementite.

The enrichment of solid iron with carbon in a temperature range between 900 °C and 1200 °C is also referred to as carburisation. The corresponding chemical reactions are as follows:

By absorbing the carbon, the solidification point of the iron is reduced from 1536 °C to approx. 1200 °C (see iron-carbon phase diagram).

In the carburizing zone, the reduced iron is enriched with carbon and forms the intermediate compound iron carbide (\(Fe_3C\), cementite)! The carburization lowers the solidification temperature of the iron!

Due to the reduction of the solidificatoin point by diffused carbon into the reduced iron, it begins to melt in the hotter zones of the blast furnace. Now the inner ore layers also come into contact with the carbon or the carbon monoxide gas and can be reduced to iron and then carburized. Gradually all the iron ore is reduced, carburized and melted. The absorbed carbon remains dissolved in the molten iron. This is the reason why pig iron has a relatively high carbon content.

In the melting zone the iron begins to melt and forms strongly carbon-containing pig iron!

The molten pig iron finally collects in the hearth of the blast furnace together with the slag, which is also liquid. Due to the higher density of the pig iron, the pig iron can be cut off at the lowest point of the blast furnace (called tapping). It has a high carbon content of about 4.5 %. Further accompanying elements are listed below, although the composition may vary considerably depending on the type of pig iron.

Other elements such as titanium, copper, etc. are also contained in small quantities in the pig iron.

When the liquid pig iron solidifies, the silicon content in particular determines whether the dissolved carbon precipitates in its pure form as graphite (\(C\)) in the microstructure or as iron carbide (\(Fe_3C\), cementite).

Graphite precipitation is preferred for high silicon concentrations. Graphite formation is also favoured by a relatively low manganese content and slow cooling. With a relatively low silicon content, on the other hand, cementite precipitation is preferred when the pig iron solidifies. This in turn is favoured by relatively high manganese concentrations and faster cooling rates.

The grey pig iron (“cast pig iron”) serves as a raw material for foundries to produce various types of cast iron or cast iron materials. It is usually cast in small ingots and offered to foundries for melting down with other materials (charging). However, the demand for grey pig iron accounts for only a small part. More than 90 % of the pig iron is beeing tapped as white pig iron (“steel pig iron”) and processed in liquid form in ironworks to the actual steel by special after-treatment processes. These processes are described in more detail in the following articles.